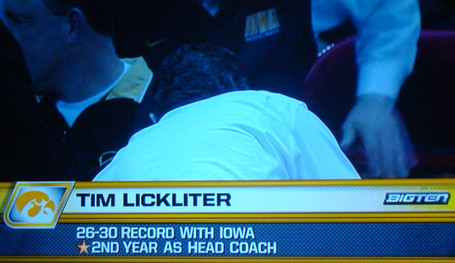 The meeting is over.  So too, apparently, is the Todd Lickliter era at Iowa.

After a 9:00 meeting with athletic director Gary Barta that lasted all of 8 minutes ("It took Donald Trump longer to fire someone on last night's Celebrity Apprentice" said Press-Citizen columnist and renowned blues singer Pat Harty on KCJJ), Todd Lickliter briefly returned to his office and left Carver Hawkeye Arena.  Scott Dochterman, reporting for all of us who have day jobs, says it's done.  Todd Lickliter has been terminated.

A press conference has been scheduled for 2:30 where we hope to have the rumors of the last week answered and the coaching search updated.  We'll be liveblogging it here.