Bring Us Your Brackets, They're Our Meat

Share All sharing options for: Bring Us Your Brackets, They're Our Meat 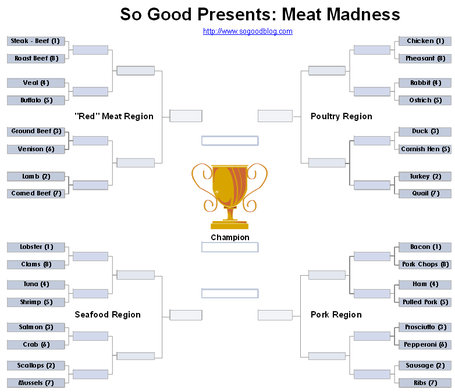 OK, so that isn't the actual bracket for the NCAA Division I Wrestling Championships.  And it's made you hungry.  We can fix that for you. (That bracket is also inherently flawed because it fails to incorporate Iowa Chops as an option; Iowa Chops should not be lumped under "pork chops" and anyone who disagrees is a filthy liar who hates America.)

(1) Go eat.  We recommend bacon.  Especially bacon wrapped around other meat.  If you want to reach true bacon-wrapped nirvana (and/or give yourself a coronary), we recommend this.
(2) While you're eating your bacon-y goodness, take a gander at the actual NCAA Wrestling Championship brackets.
Or the seeding rundown for Iowa guys if you're too lazy to click on that link:
125: #3, Matt McDonough (RS FR, 32-1)

(Quick Thoughts on the brackets after the jump)

QUICK THOUGHTS ON THE BRACKETS
125
GOOD NEWS: Indiana's Angel Escobedo (#1), the only man to beat McDonough, and Iowa State's Andrew Long (#5), who gave McDonough all he could handle in three matches this season, are on the other side of the bracket, as is the tricky Anthony Robles of Arizona State (#4) (you know, the one-legged dude).  The 2-seed on McD's side of the bracket is Cornell's Troy Nickerson (RS SR, 13-1), who's spent part of the year injured and whose conditioning may be an issue, especially over a multi-day tournament; pushing the pace is certainly something McD excels at.
BAD NEWS: Nothing, really.  The quarterfinal match-up could be a fourth match with Minnesota's Eric Sanders (#6); McD is 3-0 against him and each win has been progressively more dominant, but can he keep doing that?  And if Nickerson is healthy, he could be a very tough opponent in the semis -- he IS the defending national champion, after all.

BAD NEWS: On the other hand, Michigan State's Franklin Gomez (#3) is on Dennis' side of the bracket.  Granted, Dennis has been wildly successful against him in their last handful of matches... but can that last?  They've all been insanely close matches, decided by a move here or there.  Sooner or later, that result usually changes.  (See: Metcalf-Palmer.)

141
GOOD NEWS: Ohio State's Reece Humphrey (#4) is on the other side of the bracket as is, the 1-seed, Cornell's Kyle Dake.  Marion needs to stay far, far away from Humphrey.  The highest seed on Marion's side are guys he's already beaten once this year, Oklahoma State's Jamal Parks (#2) and Minnesota's Mike Thorn (#3).

BAD NEWS: On the other hand, both Parks and Thorn have been wrestling very well lately.  Thorn owns two wins over Marion this season and was in stunning form at the Big Ten Tournament.  If that continues, Marion is gonna have to do his damage in the consolation bracket.

149
GOOD NEWS: Brent Metcalf is still Brent fucking Metcalf.  The one guy who's given him fits lately, Ohio State's Lance Palmer, is the 1-seed and on the opposite side of the bracket.  The toughest seed on Metcalf's side of the bracket is Oklahoma's Kyle Terry (#3); Metcalf hasn't faced him yet this year, but he did beat him via major decision (14-6) in last year's NCAA Tournament.

BAD NEWS: Well, not much considering it's Metcalf and not many guys have given him trouble in his career.  Technically, Terry is another year older and more experienced.  American's Kyle Borshoff could be Metcalf's second round opponent, and he was an All-American last year.

BAD NEWS: If Kerr gets by his first round match (Arizona State's Tejovan Edwards), his reward is probably a match with the 1-seed, Harvard's J.P. O'Connor. He's only 30-0.

165
GOOD NEWS: Three of the guys who've given Morningstar fits over the past two years, Wisconsin's Andrew Howe (#1), Ohio State's Colt Sponseller (#5), and Iowa State's Jon Reader (#4), are all on the other side of the bracket.

BAD NEWS: Well, that mysterious knee injury isn't good news.  Last year's national champion, Edinboro's Jarrod King, looms as a potential quarterfinal opponent if Morningstar can get that far.  Morningstar's first opponent (West Virginia's Donald Jones) was a guy he wrestled in the first round last year.  He needed OT to beat him then and now he's hobbled.  Gulp.

BAD NEWS: Not much.  Henrich is the only returning All-American at 174, so he knows what to do come tourney time.

184
GOOD NEWS: Illinois' John Dergo (#2), who stymied Keddy at the Big Ten Tournament, is on the other side of the bracket.  Keddy's seen three of the four guys seeded higher than him on his side of the bracket -- Boise State's Kirk Smith (#1), American's Michael Cannon (#4), and Oklahoma State's Clayton Forster (#5)...

BAD NEWS: ... on the other hand, he's only 1-2 against those guys this season.  He lost in OT to Smith (3-1), got handled by Cannon (7-1), and narrowly edged Foster (3-2).  All of those matches came earlier in the season when Keddy was strugging with injuries and conditioning, but his consistency hasn't been ideal this year.

BAD NEWS: His draw sucks.  If he gets by his first match against Oklahoma State's dirty communist import, Alan Gelogaev (who's tricky), he'll probably face Minnesota's Sonny Yohn (#8), who bounced Chad from the Big Ten Tournament.  And if he beats him... well, a quarterfinal date with Iowa State's Jake Varner is likely.  And he's never beaten Varner, although he kept it to a 4-1 decision loss the last time they fought.

BAD NEWS: Zabriskie, Ellis, and Dudziak could be tricky opponents if they get their shit together.

(Yes, the title refers to a jNWU blog; despite its unpleasant heritage, it's flat out awesome.)