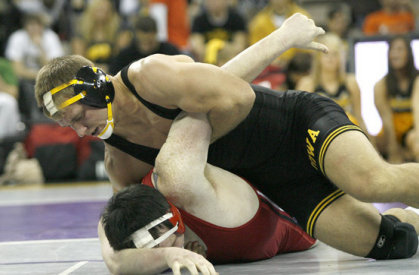 The red of the singlets really does a nice job of hiding the blood from the ass-kicking.

Described as "The New York Yankees of college wrestling" by The Salt Lake Tribune on Friday, the #1-ranked Iowa wrestling team lived up to the dominance of that moniker by steamrolling the Utah Valley Wolverines, 38-0.  It was a slightly odd detour for Iowa, which is in the midst of the conference dual season, but as Friday's post suggested (and the aforementioned SLT story confirmed) this trip was a big "thank you" to Iowa's Rocky Mountain area wrestling contingent.  The meet took place in Vernal, UT, Phillip Keddy's hometown, but was also relatively close to Luke and Ethen Lofthouse (from Avon, UT) and Dan Erekson (from Eagle, ID).  Kudos to Tom Brands and the Iowa athletic department for making this happen; the family and friends of these wrestlers certainly appreciated being able to see them wrestle without having to make a grueling trip to Iowa City.

As for the meet itself.. I'll just do a quick and dirty overview, since BHGP commenter shada's revenge has a more thorough recap in his FanPost.  The Hawks won big again, scoring their second straight shutout of the season (and seventh shutout overall, extending their school record), but Utah Valley proved to be a scrappy bunch.  They knocked off #8 Boise State on Friday night and while the final score doesn't indicate it, they did make Iowa work for the win, especially at some of the lower weights.

NEXT UP: Iowa entertains just Northwestern at 7pm CST on Friday, February 12 (live streaming on BTN.com for $2.99) and heads up to MSP to take on #5 Minnesota at 6pm CST on Sunday, February 14 (live on BTN).