We Must Break You: To The Salt Mines With You

Share All sharing options for: We Must Break You: To The Salt Mines With You 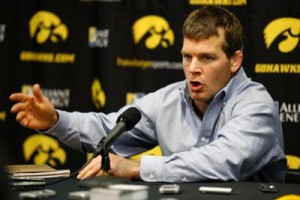 Tom Brands, lecturing the Iowa press corps on how not to be pussies.

Tom Brands can teleport?  Now the Big Ten is really screwed.  We love Tom Brands, unabashedly.  Not just because he's a winner (and boy, is he ever a winner), not just because he preaches dominance (winning is nice; dominating is awesome), and not just because we're scared of what he'd do to us if we didn't say we loved him (a healthy amount of fear is good for a relationship, right?).  No, we also love him because is, far and away, the most quotable coach in the Iowa athletic department  and every article about the wrestling team is pretty much guaranteed to have one gem.  This week?

"There was no keeping it close because you’re hitting holds with authority and it was just all over the place. Now you see me, now you don’t. I’m here. No, I’m not here, I’m over here now. You didn’t even know that I went from here to over there," Brands said. "That’s good stuff."

Either Tom Brands just admitted that he can teleport or he's also a highly-skilled magician in addition to being the best damn wrestling coach around.  I'm not sure which is more frightening.

Brent Metcalf has Twitter; now we are all doomed.  If you're not already following the Brent Metcalf Twitter feed, you should.

We like the rankings because they like us.  Updated rankings -- unless otherwise noted, assume that the rankings are unchanged from last week.

Some minor weirdness this week.  Dennis is ahead of former #1 Franklin Gomez (who he beat on Sunday) in InterMat's rankings, but still behind him in AWN (though Gomez is no longer #1 there, either).  Marion is unchanged in AWN, despite losing to an unranked kid with a losing record on Friday -- seems a little odd.  By contrast, Keddy goes down after suffering his own upset loss on Friday.  And Erekson strangely goes down in InterMat's rankings despite picking up a pair of fairly dominant wins over the weekend (albeit against not-top tier competition).

All your weekly awards are belong to us.  Fresh off his impressive win over #1-ranked Franklin Gomez on Sunday, Dan Dennis got tabbed for the Big Ten's Wrestler of the Week Award.  He becomes the fourth Iowa wrestler to win that award in the last five weeks (Metcalf, JayBo, and Marion won the award in three successive weeks last month, a Big Ten record).  Metcalf mounted a strong case of his own last weekend, with two pins (including one over the then-#5 guy, Molinaro), but there's nothing wrong with spreading the love around and Dennis did pick up the biggest win of the weekend.

More trophies are always fun.  While the first-team guys were kicking ass and taking names against Penn State and Michigan State last weekend, the second-string guys and redshirting freshmen were off dominating the action at the Grand View Open in Des Moines.  Tony Ramos (trFR; 133), Dylan Carew (trFR; 149), Derek St. John (trFR; 157), Ethen Lofthouse (trFR; 174), Brodie Ambrose (SO; 197), and Blake Rasing (SO; Hwt) picked up titles at the tournament, while Mark Ballweg (2nd; rsFR; 133), Phillip Sheridan (2nd; trFR; 149), Matt Ballweg  (2nd; JR; 157), Grant Gambrall (3rd; rsFR; 184), and Jordan Johnson (2nd; SO; Hwt) also placed highly.  With so many seniors in the starting lineup, these are the guys who we'll be relying on to continue the winning ways over the next few seasons.  Obviously the competition here is a far cry from what they'll face at the varsity level, but winning has to start somewhere.

And now for an intermission break from conference play.  The Iowa wrestling team takes a break from steamrolling Big Ten competition to head west to take on Utah Valley in a dual meet at 8pm CST in Vernal, Utah.  There's obviously no live TV or even BTN.com streaming and if you think either the Gazette or the Press-Citizen has the shekels to send a beat writer out to Utah to cover a wrestling meet, you're woefully uninformed about the state of the newspaper business.  Still, there's always the radio (AM-800, KXIC, and online at Hawkeye All-Access).

As for the meet itself... on the surface, Utah is a strange place for the Hawkeyes to road trip to, but it all clicks into place when you realize that Vernal is Phil Keddy's hometown and two other Hawkeye wrestlers (Luke and Ethen Lofthouse) are also from the Beehive State.  So it's almost certainly a way to allow their families to get a chance to see them wrestle in-person without having to travel all the way to Iowa (or points beyond).  In terms of competition, Utah Valley should be no match for Iowa, although that isn't exactly a slight on them after the way Iowa has been wreaking havoc in the Big Ten competition anyway.  Utah Valley does have one ranked wrestler (Ben Kjar, who's 11th-ranked, per InterMat); unfortunately, he happens to wrestle at the same weight as one of Iowa's hottest wrestlers (McDonough).  So, yeah, expect another lopsided win with lots of bonus points for Iowa; I'm sure Keddy and Lofthouse in particular will want to put on a show for their families and friends.