Sure, caring is creepy.  That's why we generally leave it to the Rivals guys.  But once their signature goes on the dotted line of an Iowa letter of intent, caring ceases to be creepy and becomes essential.  So, without further ado, your objects of affection and/or scorn (sometimes both at the same time) for the next four or five years. Last up: defensive skill positions.

*NOTE: There may not be actual centaurs.

Austin Gray (6'2", 220)
Linebacker
Fitzgerald School (Warren, MI)
3* Rivals, 3* Scout, 77 ESPN
Gray was the earliest non-James-Morris commitment of the class, joining the ranks way back in April of 2009. He's decently sized, straight-line-fast, and can hit. Think Pat Angerer when Angerer wasn't a gifted pass coverage man. Or basically his first two years in school. He even kind of looks like Angerer a little bit. This kid looks like an ILB through and through; he's not big enough for the line, and his cover skills don't look anything like what you'd expect from an Iowa OLB.
Fun Fact: Gray's middle name is "Citylimits"; his parents weren't especially fans of the concert show ("too hit and miss," Papa Gray told us) or anything, it's actually a family name passed down from ancient Gaelic! It means "bread miller."

Jim Poggi (6'2", 215)
Linebacker
Gilman School (Baltimore, MD)
3* Rivals, 3* Scout, 75 ESPN
Poggi is another one of Ferentz's early successes with this class, and his commitment paved the way for teammate Anthony Ferguson to commit shortly thereafter. Poggi's another Fake 4.6 guy, and while Rivals lists him at OLB, Scout and ESPN slate him as a middle linebacker. That'll probably be the case; he's got the frame to get up to 240-250. Of course, if Ferentz wants to get Poggi on the field, the outside's hardly out of the question. He'll be redshirting either way, probably.
Fun Fact: The Disney smash hit cartoon Kim Possible was originally titled "Jim Poggible" after Poggi's father pitched it to network executives; the name and subject were only changed after researchers discovered "Poggible" isn't a word!

B.J. Lowery (5'11", 175)
Cornerback
Hughes High School (CIncinnati, OH)
3* Rivals, 3^ Scout, 76 ESPN
Lowery seems cut right out of the Shaun Prater mold, which is to say he's a little smallish, physical at the point of attack, has some work yet to do on technique, and can play absolutely no other position than cornerback. If technique's what's holding Lowery back from the big time, that's not all bad; that's the one thing coaches can fix. And lest we recall the horror show that ensued last season when cornerbacks got tossed out there before they were ready to play, well, they're all back; the likelihood of Lowery seeing the field this season (or even next) is probably pretty small; iif he is on the field, it's either because he's far better than anyone predicted or all hell has broken loose with the numerous players ahead of him. Neither seems likely.
Fun Fact: Lowery has never seen a cat in person, nor does he ever plan to!

James Morris (6'2", 215)
Linebacker
Solon High School (Solon, IA)
3* Rivals, 3* Scout, 74 ESPN
We don't know who at ESPN hates Morris, but a 74 rating is just plain silly. True, his only two stated offers were Stanford and Iowa, but he took up Iowa's scholarship offer as a sophomore back in '07 and hasn't looked back, dominating 3A ball for the Spartans. If he had pulled an Attention Whore and openly courted schools for as long as possible, he'd likely have been a four-star recruit. Dude can play. While he's a gifted tailback, he's probably not headed for Iowa's backfield; he's not quite good enough to crack that logjam at RB, and he's too good to be relegated to fullback duty. No, he's being molded in Chad Greenway's image and is expected to be Iowa's next ultra-fleet SLB.
Fun fact: At the age of seven, Morris attended a Cubs game at Wrigley Field with his parents. He wandered onto the field during the game and actually played third base for two innings! He committed several errors, being a 7-year-old in street clothes and without a glove, and his play cost the Cubs the game. In order to avoid numerous federal labor restrictions, the Cubs refused to acknowledge Morris' play in their records.

Anthony Hitchens (6'1", 195)
Safety
Clearview High School (Lorain, OH)
Rivals 2*, Scout 2*, ESPN 74
Hitchens was offered late in the recruiting process after David Cato transferred out of the secondary. While we'd love to have Cato keep sticking around in case Tyler Sash is hurt, the fact that Sash played through injuries that'll keep him out through spring ball while Cato was planted on the bench probably tells us all we need to know about his prospects for meaningful playing time at Iowa. Shame, really. In his place is Anthony Hitchens, a tailback/safety prospect with middling-to-poor offers from schools like Akron and Indiana. His highlight reel is decent and he's certainly aggressive from that safety spot, but a safety's true value in a Ferentz defense comes in what he does when he's not attacking the LOS. Either way, Hitchens'll probably get his chance there a few years down the road. He's a project, to be sure, but Iowa has a pretty decent track record with these late-offer projects when they stick around.
Fun Fact: Despite his hometown name, Hitchens is violently allergic to quiche lorraine, and doctors can't figure out why!

Christian Kirksey (6'2", 200)
Linebacker
Hazelwood East High School (St. Louis, MO)
Rivals 3*, Scout 2*, ESPN 40
Kirksey is an interesting story. Despite being relatively unheralded by most services, he was a relatively early commit for Ferentz; Kirksey verballed in late August, before the season started. He's projected at OLB, though he'll clearly need to add some weight if he wants to have a prayer of shedding blockers. On the other hand, Virginia Tech and other forward-thinking defensive teams have made good use of guys with Kirksey's size and skill set at a "rover" or "hero" or "spidermonkey" (made that one up, sorry) position. Of course, that's not the way Norm does things, and his resume speaks for itself.
Fun fact: When asked by teachers who the celebrity he most wants to meet is, Kirksey replied with Gaahl, from Norwegian death metal band Gorgoroth. School administrators decided not to press the issue and decided to just keep an eye on the young man until graduation.

Tanner Miller (6'2", 200)
CENTAUR
Mid-Prairie Community High School (Wellman, IA)
Rivals 2*, Scout 2*, ESPN 40
Yeah, we said maybe there were no centaurs. But you know what that means? MAYBE THERE ARE. And since Miller's commitment basically flew out of nowhere yesterday and we don't even know where the open scholarship came from (please not Jeff Brinson please not Jeff Brinson please not Jeff Brinson), we can only assume that Iowa found a loophole that allows cloven animals onto scholarship if they have human arms or something. We don't know; we're not the experts here.
Fun fact:
Is half man, half horse. 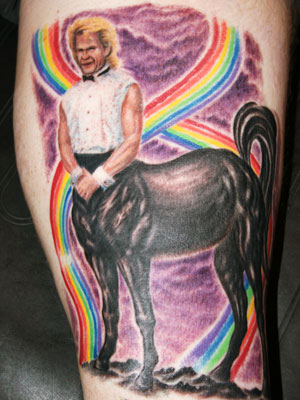 (Artist's rendition of Miller in action)