Share All sharing options for: 74-57: Way To Go There Guys Awesome Job No Really

It's hard to say whether having a short memory would help with a season like this. On one hand, the FIRE JOHN LICKLITER rumblings vary entirely based on how well Iowa has played in its previous game, and that's annoying; win and he's the next Kirk Ferentz, lose and he'll never win another game again.

On the other hand, there's not a whole lot worth remembering about this season; sure, there are wins scattered here and there that could easily be looked at as things to build upon, even if this latest game makes it look like no such building has taken place as yet.

Perhaps the best answer, in terms of maintaining sanity, would be selective memory. That always works, especially in abusive relationships.

Other than that... what can you say? Northwestern whooped Iowa up and down the court. Their matchup zone forced Iowa into a horrific 3-21 performance from behind the 3-point line, and at no point did Iowa look capable of putting together a run to get themselves back in the game until the very end, when Northwestern's entire five on the floor were hammered drunk and wearing lampshades on their heads. 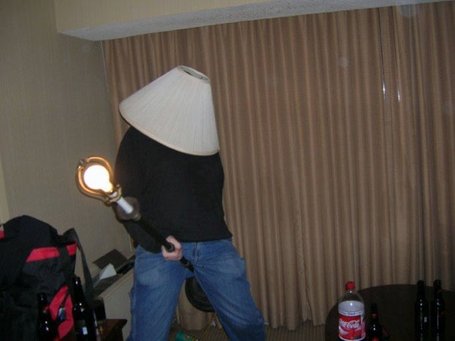 (Not that there's anything wrong with that, mind you. It has its time and place.)

Until that point, though, Northwestern ran their offense at will--and at Jarryd and Andrew and Brennan, or whatever post player Iowa trotted out. Without fail, the Wildcats ran back cut after back cut after back cut, resulting in a parade of layups. At one point, jNWU had connected on their first 11 two-pointers of the game, and none of them were flukes or difficult jumpers. They did whatever they wanted.

Oh, and Girl Shot John Shurna is apparently the deadliest shooter in all of history. He looks like a pituitary-diseased 12-year-old and he plays like a WNBA guard, but he can't be stopped short of Eric May swinging a Louisville Slugger straight into his ribcage. We don't normally advocate assault with a deadly weapon during the middle of a basketball game, but we'd kinda like to see that.

The man of the match for Iowa was nobody. Matt Gatens had a decent-looking 15-8-4 line, but he just plain doesn't look like himself anymore. Just last year, he was rewriting Iowa's record books for 3-point accuracy by a freshman, hitting at a 45% clip; tonight, he was 0-6, and some of the shots were wide open. We'd want someone to ask Lickliter if Gatens is hurt, but the last time someone tried asking him that question, it didn't go very well.

Other than that, who do you want to hail? Jarryd Cole was abused on defense and did nothing on offense. Aaron Fuller fouled out in 20 minutes of play. Cully Payne registered one assist in 33 minutes of play, and that should basically never happen. May was a bricktastic 0-7 from downtown. The reserves scored all of 10 points in 57 minutes, or 28.5% of Iowa's minutes. 9 of those minutes were played by Andrew Brommer, who needed no more than those 9 to foul out. Seriously. As one commenter put it in the game thread, "I'm convinced he doesn't know the rules of basketball," and while that's an awful thing to say about a Division I basketball player, it certainly would go a long way in explaining the enigma that is Andrew Brommer.

As for the next game, this Sunday against Indiana, we certainly hope the players have a short memory. It's Iowa's home finale, and we sure hope Iowa calls it Senior Day and not just Devan Bawinkel Day. Also, if we're not careful, Matt Gatens and half the coaching staff are going to pose as seniors in hopes that that means they can leave. It doesn't work that way, guys. Sorry.