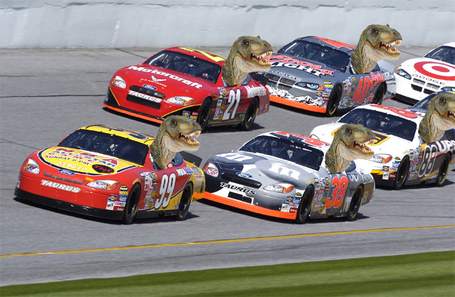 You keep your eyes on the road, Dinosaur racecar drivers!

Here's the deal: dinosaur racecars would be awesome. Logistically though, it would be a big hassle, because do you have any idea how huge a T-Rex dinosaur racecar would have to be? Like REALLY big. And they don't even have factories for that.

If that's too labor-intensive, then maybe we have to scale down our expectations and teach them all dinosaur karate. That just needs a big enough place for the dinosaurs to do their dinosaur karate without like breaking trees and buildings and valuable utility poles. Godzilla and his foes tried to do dinosaur karate in Tokyo and what a mess that was. No thanks. You dinosaur guys can just stay out in the country, if you ask me.