It's Not Plagiarism If You Link To It Laughs and Laughs

Share All sharing options for: It's Not Plagiarism If You Link To It Laughs and Laughs

Schadenfreude, Part One.  The Zooker sat down with the Chicago Sun-Times to discuss his Illini's disastrous 2009 campaign, in which Illinois entered as a darkhorse Big Ten championship contender and finished 3-9, capped by one of the most inexplicable last-second losses in the history of the game, a loss so bad it left Charles Davis speechless.  Zook attributes his team's low morale and his poor showing in recruiting to, of all things, the Illinois fan base:

‘‘Sometimes I think as a university and as a group of fans, we shoot ourselves in the foot. The negative recruiting, it all stems from us, from our own people. Rather than getting behind the program, they want to start lambasting it.

‘‘The negative recruiting was the worst I’ve ever seen it this year. But a lot of that is our own people. There’s not enough people that believe this program can be where it can be. You’re changing attitudes. You’re changing beliefs. ‘There they go again. They can’t sustain it.’ When you go back and look at what’s happened the last 25 years, it’s going to take a tough son of a [gun] to get through that.

‘‘What you have to do is educate your players so they understand that’s part of it. Particularly when you have a bunch of young guys who have trouble handling it. They read the papers. The e-mails I’m getting, they’re probably getting the same things. Pretty soon it’s like, ‘Damn, does anybody care?’"

As Doc Saturday correctly points out, the negative attitude of Illini fans could be attributed, at least in part, to the fact that this talent-rich roster was really bad at playing football.  Illinois was utterly atrocious on defense, finishing last in the conference in virtually every meaningful statistic; the offense in general, and Juice Williams in particular, weren't much better.  Despite making a Rose Bowl in 2007-08, Zook is 18 games under .500 in his five seasons in Champaign.  At some point it's no longer negative recruiting; it's objective reality. 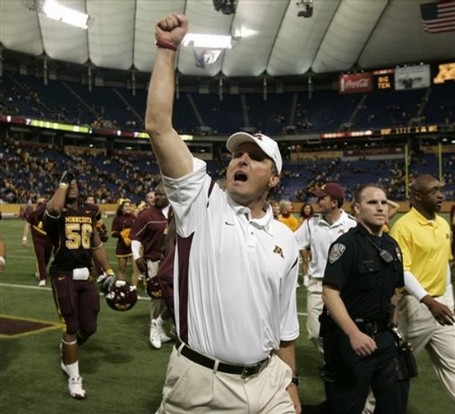 Schadenfreude, Part Two.  The Daily Gopher's Buck Bravo gets all Georgia Techy and breaks out the charts and graphs for his preview of Minnesota's 2010 season.  After examining historical Sagarin ratings and finding that the 2009 Gophers -- unquestionably Tim Brewster's best squad in his three years with Minnesota -- is the rough equivalent of Glen Mason's worst squad, he looks into the matrix and finds seven wins.  Well, maybe seven wins:

Using 2009 rankings as a comparison, there are five games that Minnesota will probably lose and four games that they will probably win. That would leave three games in limbo that could be the difference between 4-8 and 7-5. So, based upon a premature look using 2009 data, a 6-6 season wouldn't be all that bad and a 7-5 season should be the realistic target. An eight win season may be a long shot....

Since my glass is usually half full on these matters, I'll predict a 7-5 regular season that draws criticism from the usual suspects.