Rep. Wayne Ford Holds Adrian Clayborn to Higher Standard Than He Holds Himself

Share All sharing options for: Rep. Wayne Ford Holds Adrian Clayborn to Higher Standard Than He Holds Himself

You had to know this was coming, right? Some politician starts grandstanding about holding people to unreasonable standards of conduct, and what do you know, he's got unaddressed issues of his own.

Quick refresher for those who missed it this morning: State Rep. Wayne Ford (D) of Des Moines, who kinda looks like James Earl Jones, fired a verbal salvo at Adrian Clayborn last week, saying Clayborn "did not deserve ... to play" in the Orange Bowl on account of his outstanding assault case that seems to be nearing an end in March. We'll let Rep. Ford explain his reasoning once more:

"My concern is for the athletes. We are sending the wrong message when we ignore their wrongdoing. We are saying that if you are a good enough player you can do whatever you want and do not have to face the consequences. This is not how life works and our students need to learn that before they get into even more serious trouble."

"It is not about being found innocent or guilty. It is about what is and what is not appropriate behavior." 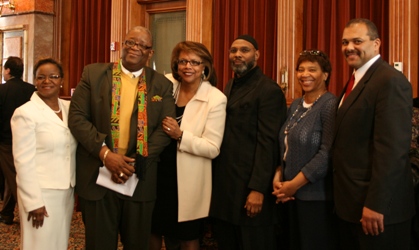 Ford (second from left), seen here shunning Rep. Kerry Burt (far right) after Burt's DUI arrest and demanding Burt be removed from the floor of the Statehouse until his case is completely resolved.

Now, Ford deserves some credit for his candor in admitting that his stance isn't based in legality, but merely the appearance of impropriety. That's fair. Somebody representing the state of Iowa should never, ever do so with the cloud of misbehavior hanging over his or her head.

On May 15th, Ford's campaign reimbursed an urban dreams employee $93.00 for gratuities paid to youth. Ford wrote checks out to himself for the same purpose four more times that month and once in June. The total amount spent on gratuities to youth over the three week period was $2693.00

Another red flag  on May 30th, Urban Dreams, the non-profit managed by Ford, contributed a little more than $60 to Ford's campaign. In a letter to Ford, the Iowa Ethics and Campaign Disclosure Board ordered the campaign to refund the money. Iowa Law prohibits non-profits from contributing to campaigns. In fact, it could jeopardize Urban Dreams' non-profit status.

And finally, there are questions about loans made to Ford from his campaign and how they were repaid. The oversight group wants to know why in one case, "a loan would be made, seemingly to repay a loan."

Funny thing: we can't find any record of Ford recusing himself from all legislature-related business, even as his office stalled for time while trying to resolve the issue. In fact, we haven't been able to find any mention of the issue since the aforementioned report on June 26th. So, if this issue is still outstanding, doesn't it necessarily follow that Ford should demand his own suspension immediately? Or is that "not how life works"?

And look, it's entirely possible that Ford and his campaign have done absolutely nothing wrong or illegal. But Ford himself said that's not the point. And if he wants to call Kirk Ferentz's ethics into question over what will likely be a guilty plea for simple assault--a charge that carries a $65 fine and no jail time--one would imagine he would have even more appreciation for the severity of ethical concerns about finances, and police himself accordingly. But then again, nobody in this House seems to have any worries about throwing stones.

[Quick reminder: BHGP is not where people go for political talk. We would be making the same points about Ford if there were an R attached to his name or if his skin color were white. Your challenge is to hold yourself to the same standard.]