THE OLYMPICS JUST GOT AWESOMERER

Share All sharing options for: THE OLYMPICS JUST GOT AWESOMERER 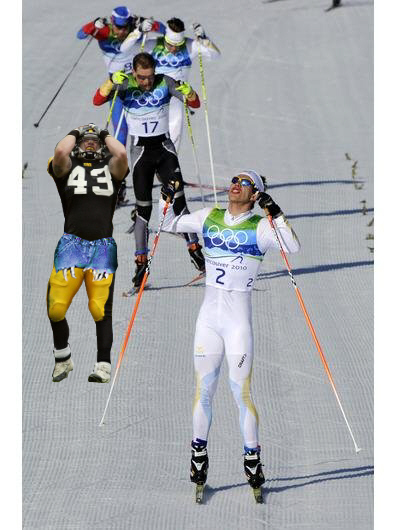 In retrospect, Tobias' decision not to wear skis would doom the German's chances.

Hate to jump in on the Iowa Hawkeye coverage going on right now--what with basketball season or whatever--but we would be remiss if we didn't point out Germany's silver medalist in the 30 km cross-country skiing: Tobias Angerer.

Now, we don't know how our Captains America--Leman/Stanzi 2012--have received this news, that the Angerer clan is not fully committed to America. Doubtless there's some ire. But even they of the stars and stripes must approve in some respect of the Analrapist On Skis, because come on; his name is Tobias Angerer.

And lest we consider this some rare, weird coincidence, au contraire bonjour; Toby isn't even the only Angerer in the Olympics. There's also Pat himself in the experimental "speed-eating opposing running backs" Karl Angerer in Germany's 2- and 4-man bobsled teams. Clearly the Angerer family is full of world-class athletes; we can only hope there's another one in the works somewhere... and that he's got the common sense to focus on football over here. There's nothing better than being an American. And so, this is the greatest feeling, if you don't love it or leave it, USA, number one!