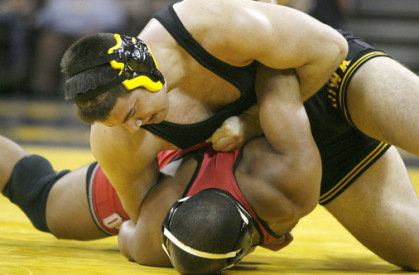 Big Dan seems pretty healthy; too bad for the other heavyweights out there.

60, 25, and 26: that would be, respectively, the consecutive dual meets, consecutive home dual meets, and consecutive Big Ten dual meets that the Hawkees have now won after the #1-ranked Iowa wrestling team put on an absolute clinic on Senior Night, piledriving #4-ranked Ohio State into oblivion, 32-3, and locking up a third straight Big Ten regular season championship. And yet... while the team score was undeniably lopsided, but four of the wins came by two points or less.  On the other hand, while those matches were close, there were precious few opportunities in them for the OSU wrestlers to get the points they needed to secure victories.  At 133, Ian Paddock did nothing until the final thirty seconds of the bout.  At 149, Palmer got in fairly deep on one good shot, but he was never close to scoring on Metcalf after that.  At 165, Sponseller wasn't even all that close to getting an escape against Morningstar, let alone getting a takedown.  184 was tighter, with Pucillo having a great shot at a takedown as time expired in the third period.

Stylistically, this OSU team bore more than a passing resemblance to Iowa's more famous rivals with the same moniker: they were defensive-oriented to the extreme and as stall-tastic as they come (too bad for them they ran into a referee who was having none of that bullshit -- he was all too happy to warn them for stalling and to penalize them a point if they didn't pick up the action).  Against an opponent who's extremely skilled at that style, it's going to difficult to rack up a ton of points in individual matches.

A moment of appreciation for the fact that Iowa's taken on the #4 and 5 teams in the nation in their past two duals... and they've won them by a combined score of 60-12.  Make no mistake: Ohio State and Minnesota really are good teams, and they still got curbstomped hard by Iowa.  This Iowa team has done a tremendous job of improving as the season progresses and getting healthier has only made them even more dominant.  To be sure, being dominant in dual meets is not the same thing as being dominant in tournaments... but Iowa has the depth of talent and the high-end talent to do just that, too.  Six of Iowa's ten starters are ranked in the top four in the nation at their respective weights (seven if you include the injured Chad Beatty).  Two others are ranked in or near the top ten (Keddy and Erekson) and seem to be peaking at the right time of the season.

125: Since the match started at 133 rather than 125, McDonough was moved from his traditional lead-off hitter role to a closer role, although this points certainly weren't needed.  He wasn't able to be a sparkplug for the team, but it hardly mattered, as he was his usual dominant and controlling self.  What more can we really say about him at this point?  He's so, so good right now and he's part of the triumvirate of wrestlers (along with Metcalf and Borschel) that could get Iowa a lot of team points in the national title race.

133: Dennis looks a little troubling right now.  Sure, Paddock was on defense for the first 6:30 of the match, but Dennis still needs to offer more variety in his shots and attacks.  He's going to be facing much harder foes than Paddock at the Big Ten and NCAA Tournaments.

141: Full credit to Humphrey tonight -- he looked very good tonight.  He was one of the few OSU wrestlers willing to push the action and he did a great job of using both his own shots and countering of Marion's shots to get offense.  He seemed to shut things down a little early, but he's a very dangerous guy at 141.  Marion may get another crack at him in a few weeks at the Big Ten Tournament, but he's going to need to come up with a new gameplan to best Humphrey... and, truth be told, I'm not sure what that gameplan might be yet.

149: This was a decidedly unusual Metcalf match, although it's fairly par for the course when he's in there with Palmer.  Palmer had one good shot in the first period (that Metcalf was able to escape), but otherwise he had nothing.  Metcalf initiated most of the action through the first two periods, but he seemed to be deliberately wrestling a more cautious style to avoid giving Palmer any opportunities to use Metcalf's own aggression against him.  Metcalf seemed to go even more on the defensive in the third period, but again, it seemed to be purely a function of the opponent.  Palmer's a difficult guy to score a lot of points on.  That said, hopefully Metcalf can figure out how to get a few more points on him because he could face Palmer twice in the next month and it would be nice to avoid more nerve-wracking, tight matches like this one.  That's what Morningstar is for, sir.

157: As expected, Janssen got the nod after Kerr's underwhelming effort against Schlatter on Sunday and he did what was asked of him, more or less.  It wasn't quite the ideal performance, but he was far more aggressive and attack-oriented (although it's also far easier to do that when the opponent is Sean Nemec and not #2 Dustin Schlatter, but hey).  Was it enough to open up some distance between himself and Kerr and settle the season-long debate at 157?  Doubtful, but it will be interesting to see who goes at 157 against Wisconsin on Sunday.  It wouldn't be a shock if Kerr got one last chance to impress before Brands is forced to pick a guy to go in the Big Ten and NCAA Tournaments.

165: Rather than focus on the lackluster offense on display in this match, let's offer some praise for Morningstar's superior riding skills.  He did a tremendous job of riding Sponseller out in the second period of their match and he's become a very dominant and controlling wrestler on top.  Granted, all that control and riding time was rendered worthless when he was unable to escape until late in the third period and he never came all that close to getting a takedown, but hey.... it was Senior Night, so let's focus on the positives.  Morningstar's ability to control guys from the top like that is an important skill to have, especially for a guy as defensive as he is.

174: With Metcalf wrestling a cagey match with Palmer, Borschel decided to pick up the domination slack by manhandling his second straight ranked Big Ten opponent.  This wasn't quite the epic bitchmaking that he delivered to Glasser on Sunday, but it was still mighty impressive.  He's even more dominant than Morningstar on top, since he's much better at locking up armbars and turning guys for nearfalls and pins.  He wasn't able to do that last night, but the mere threat of it but Rella in some bad spots.

184: Very nice win for Keddy tonight.  Pucillo is a tough opponent (although, like Keddy, he's been having a disappointing and inconsistent season), but Keddy was able to pick up the win with one of his trademark overpowering takedowns and his blink-and-you'll-miss-it escapes.  He also did a nice job of pushing the action in most of the remainder of the match, even if he was unable to get more points.  That said, he very nearly gave up a late takedown that would have cost him the match, so he needs to stay focused for the entire seven minutes against top-level opponents.

197: A nice bounce-back win for Lofthouse after his ugly loss to Yohn on Sunday.  Magrum is not in that class of competition, but it was good to see Lofthouse being more aggressive and successfully completing a shot or two.  All in all, he's done a very solid job of filling in for Beatty for the bulk of the season.

Hwt: Evidently Big Dan decided to put on a show for the CHA faithful on Senior Night.  The sluggish Erekson from the Minnesota dual was nowhere to be seen, as he racked up a takedown and a pair of nearfalls to open up a massive lead barely over two minutes into the match.  The pin was almost academic at that point.

NEXT UP: #14 Wisconsin at 3pm in Madison on Sunday, February 21.  Like tonight's dual, it's tape delayed until 10pm CST Sunday night on BTN, although this one should also be available via BTN.com live stream ($3) at 3pm if you don't want to wait that long.