Share All sharing options for: It's Not Plagiarism If You Link to It Has a Hole in its Swing 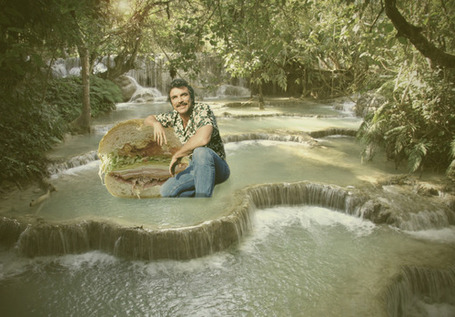 Selleck.  Waterfall.  Sandwich.  There's really nothing more to say; its brilliance is apparent.

Big Pun.  On the eve of signing day, Marc Morehouse profiles one of Iowa's earliest -- and most intriguing -- commits, Maryland halfback Marcus Coker, who is 6'0", 228 pounds, and wants to be the next Shonn Greene:

Iowa doesn’t have a bona fide Greene prototype, at least with a resume. That’s kind of what sold Coker, the Shonn Greene factor.

"That was one of my biggest turn ons about the school," said Coker, who rushed for 39 TDs in his final two seasons at DeMatha. "If he did it and I work hard, I can do it, too. We have the same body type."

In 2008, Greene rushed for an Iowa season record 1,850 yards and 20 TDs. He left Iowa with one year of eligibility remaining and landed in the third round of the NFL draft with the New York Jets. He was a sensation in the playoffs, rushing for 304 yards and two TDs before being knocked out of the second half against the Indianapolis Colts in the AFC championship game.

Greene was a factor in Coker’s recruiting. He saw what Greene did and he liked it.

"The Doak Walker winner," Coker said with a laugh. "They showed me some of his game video and some of the technique he used. I already knew about him. I did some research."

Now, with that out of the way, Coker clearly has some work to do; best case scenario, he's entering Iowa as the fourth option on the halfback depth chart, and a redshirt appears inevitable.  But in a class light on halfbacks (due in no small part to the glut of sophomore backs on the depth chart), the opportunity will eventually be there.  Remember, too, that Greene played as a true freshman (off a season in prep school) and sophomore despite the fact that the world-beating 2005-06 incarnation of Albert Young was in the backfield; as Coker indicates, he'll be given a chance to earn some change-of-pace snaps if he's as good as advertised.

Calendar Girls.  In the wake of Saturday's embarrassing loss at Michigan, Todd Lickliter turned his attention toward the schedule:

He said the team was flat and the team’s third game – including two road trips – in seven days took its toll on the team.

"I think last week was very demanding," Lickliter said this morning. "I’m not taking anything away from John (Beilein) and Michigan but there was a freshness. They played at home on Tuesday and at home on Saturday. We played three games in a week and when you play three games in a week, you don’t get a day off. I think everybody, especially this time in the season, a day off is a good thing."

There is no doubt last week was difficult; not only did Iowa play 3 games, but they took two of the longest road trips on the schedule.  There is also no doubt that these are the simple facts of life in the 18-game Big Ten; when you add two games to the schedule and make no adjustment to the conference season's start date, you're going to have three-game weeks, and your team may be flat by the third date.  Three games or not, going nine minutes without a field goal to start a game is unacceptable.

More telling here, though, is Lickliter's mood during his postgame press conference.  As one of the Doc's commenters notes, Lickliter looks like he's suffering from post-traumatic stress disorder.  If we had left a top 25 program to inherit a mess, then watched as the best players ran for the hills, we would look a little shellshocked, too.

We have a hard time disliking Todd; his perpetually moribund expression matches ours, and he's always good for a self-deprecating quote.  The unofficial BHGP position has been to let this play out for at least one more season; as we all know, changing coaches isn't always the answer.