We Must Break You: The End Is Nigh

Share All sharing options for: We Must Break You: The End Is Nigh

Programming note: Let this thread serve as your open thread for discussion of tonight's OSU dual. 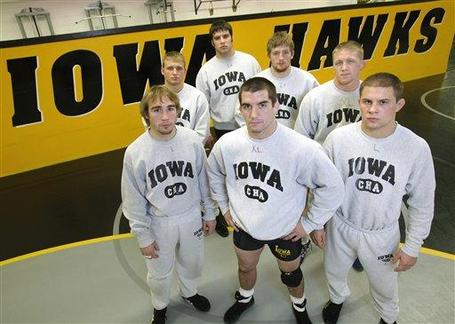 The end is the beginning is the end.  Tonight marks the beginning of the final stretch of the Iowa wrestling team's season; it's the final home meet of the season, as well as as chance for Iowa to lock up a third consecutive Big Ten regular season championship by toppling the only other team undefeated in the league, Ohio State.  Being that it's the home finale for the season, that also means it's Senior Night... and there are a lot of seniors on this team, in case you haven't been paying attention.  Andy Hamilton wrote a piece today about a handful of them looking back at their Iowa careers:

"It's been an honor," Metcalf said. "From where I started at Virginia Tech, to be able to come here and have this experience, it's been pretty awesome, and it's been more than I probably anticipated my college experience being just because of how amazing it is wrestling in front of the fans you have here, wrestling for this university and the fact we've had the success we've had the last two years."

Iowa's 11-member senior class includes nine wrestlers who have been full-time starters at one point for the Hawkeyes and seven All-Americans. The group has accumulated 1,640 dual points and has started 520 dual matches at Iowa.

Hamilton's article focuses on the four remaining Virginia Tech transfers (who, despite all the fuss that's surrounded them at times, have contributed only two starters to this year's terrormonster of a team) in Brent Metcalf (149), Jay Borschel (174), Joe Slaton (141), and Dan LeClere (141), but there are many other seniors hitting the mat for the last time tonight, including Dan Dennis (133), Ryan Morningstar (165), Phil Keddy (184), and Dan Erekson (Hwt).  Additionally, it's the last home meet for seniors Chad Beatty (197), Michael Fahrer (165), and Rick Loera (197), who won't be wrestling tonight but will still take their final bows.  Beatty would obviously be wrestling if he wasn't injured, but a moment of appreciation for Fahrer and Loera; they may not have been good enough to win the starting spots at their respective weights, but you don't spend this much time in the Iowa wrestling room unless you truly love the sport and your team, and the work they've been able to provide in the practice room has undoubtedly been hugely beneficial for many of the starters.  Three cheers to this year's senior class; we won't see their like again for a very long time.

How they do that?  Intermat went behind-the-scenes to show how BTN puts together a wrestling broadcast, and while that's interesting (especially if you're a process wonk), the most intriguing line was one thrown off near the beginning:

It'd be very gratifying if that's true.  Although it also makes BTN's decision to tape-delay tonight's meet between two top-five teams in favor of a college hockey match a little more annoying and confounding.

Brent Metcalf is full of love and respect for his fellow competitor.  Yep.  No question about it.

brentmetcalf: Palmer and Ruschell this week. Also this week: tryouts to be my bottom bitch. Coincidence?
brentmetcalf: @KatyParkey Work is never overwhelming doing what you love, and I do love making tanned OSU boys cry.
brentmetcalf: Last time in CHA, planning to implant Palmer into the floor so everyone remembers me.

Tell me how awesome we are in numerical ranking form, dammit.  Updated rankings -- unless otherwise noted, assume that the rankings are unchanged from last week.

Marion is once again Mr. Volatility in the rankings as his impressive win over Mike Thorn moves him up the rankings.  Nice to finally see McD finally move up a spot in one of the polls, too.

Sure, it has little bearing on tonight's meet and it doesn't make up for their utter ownage of us in football... but it does feel a little sweet to absolutely dominate OSU in wrestling.  So how will tonight's dual go?  Let's take a guess:

125: #3 Matt McDonough (Iowa) vs. Nikko Triggas (OSU); McD is wrestling way too well right now to lose to an unranked guy.  The better question is how many bonus points he gets.  Let's play it safe and go with a major decision.  McD maj dec. Triggas (Iowa, 3-0)

133: #3 Dan Dennis (Iowa) vs. Ian Paddock (OSU); Dennis hasn't been Mr. Consistency lately and he did struggle with an unranked wrestler against Utah Valley a few weeks ago... but with this being Senior Night and him wanting to erase the bad taste of the beating he took from Ness on Sunday night, I think he rebounds well here.  Dennis maj dec. Paddock (Iowa, 10-0)

141: #4 Montell Marion (Iowa) vs. #2 Reece Humphrey (OSU) OR replacement; Humphrey's reportedly nursing an injury and there's speculation that he might be held out tonight to allow him to heal up for the Big Ten and NCAA Tournaments.  If Humphrey was healthy, I'd expect him to win here.  If he wrestles injured, though, it could be a different story -- McD took apart a gimpy Sanders for Minnesota last week and Marion could spring an upset on Humphrey if he's hobbled.  If Humphrey doesn't go, you have to favor Marion against an unranked, inexperienced guy -- so long as he doesn't allow himself to get too overconfident and complacent, anyway.  Let's assume Humphrey doesn't go.  Marion dec. OSU Wrestler X (Iowa, 13-0)

149: #1 Brent Metcalf (Iowa) vs. #2 Lance Palmer (OSU); this is the spotlight match of the dual and perhaps the entire weekend.  Metcalf hasn't faced a top guy since he tore thought Penn State's Molinaro almost a month ago.  Palmer has always given Metcalf fits by employing a heavily defensive style and hoping to score a takedown in the third period to eke out a win.  To date, Metcalf is 3-0 against Palmer, although none of the victories have been overwhelming (5-3 and 3-2 in '08 and 6-2 in '09).  It would be probably be folly to expect anything but a close match, but Metcalf has been wrestling so damn well lately and it is Senior Night and he is wrestling for his 100th career win, so you have to know the motivation is going to be flowing strongly through him.  I think it's either a decision win for Metcalf or a fall if he can get him on the ground and get him turned; I don't see him being able to get in enough offense to rack up either a major decision or tech fall.  A pin seems unlikely, but Metcalf's pinning prowess has improved dramatically this season, so you never know.  I suspect he'd hate to leave CHA with just a decision victory, but he may have no choice.  Metcalf dec. Palmer (Iowa, 16-0)

157: Aaron Janssen or Jake Kerr (Iowa) vs. Sean Nemec (OSU); based on how upset Brands seemed by Kerr's non-aggressive approach to the match with Schlatter on Sunday, it seems likely that Janssen gets the nod here.  Two unranked and inconsistent guys here; just flip a coin.  Janssen dec. Nemec (Iowa, 19-0)

165: #4 Ryan Morningstar (Iowa) vs. #6 Colt Sponseller (OSU); the other spotlight match of the dual features Morningstar and Sponseller, who've tangled twice in the past with Morningstar winning a pair of close matches (2-1 and 4-2, both in OT) last year (shock!).  Morningstar seems to be wrestling with added confidence of late and it is his final home match at CHA... let's see him run that career record to 3-0.  Morningstar dec. Sponseller (Iowa, 22-0)

184: #11 Phil Keddy vs. #7 Mike Pucillo (OSU); before the season began, Keddy and Pucillo were two of the favorites to become the top guys at this weight this year.  Unfortunately, both guys have had underwhelming seasons and find themselves much farther down the rankings than anyone expected.  Keddy's been wrestling better lately, but he owns a 1-3 career record against Pucillo and his overall inconsistency this season can't be overlooked.  Prove me wrong, Phil.  Pucillo dec. Keddy (Iowa 26-3)

197: Luke Lofthouse (Iowa) vs. C.J. Magrum (OSU); Lofthouse was wrestling quite well until he had an absolute turd against Minnesota's Sonny Yohn on Sunday.  Hard to know what to expect here, but my faith in Lofthouse is a bit shaken right now.  Magrum dec. Lofthouse (Iowa 26-6)

Hwt: #10 Dan Erekson (Iowa) vs. Corey Morrison (OSU); Big Dan looked sluggish against Minnesota on Sunday and his lack of activity in the third period almost cost him the match; only an OT takedown was able to get the victory for him.  He's another senior who should be fired up to leave on a hight note.  Erekson dec. Morrison (Iowa, 29-6)

In Iowa's other matches against top-five competition this season they had close matches against Iowa State (twice) and Oklahoma State and blew out Minnesota; the ISU and Okie State meets were close because ISU and OSU have quite a bit of depth and because Iowa was missing key guys in all of those duals.  By contrast, this Iowa team is much healthier, wrestling at a much higher level now, and facing a team that doesn't have nearly as much depth as ISU or Okie State... which is why I see a result more in line with the thrashings they delivered to Minnesota than the nail-biters against ISU and Okie State.

BADGERS BADGERS BADGERS on the brain brain brain.  Despite having a 7-9 overall record and a .500 record in the Big Ten (3-3), Wisconsin is ranked 14th in the nation; such is the power of the Big Ten.  This should be another lopsided win over the Hawks, but there are a few interesting match-ups.

133: #3 Dan Dennis (Iowa) vs. #6 Tyler Graff (Wisco); Graff is another one of those precocious freshmen like McDonough, but now he gets to take on a wily veteran in Dennis.  Dennis has had his problems lately, but I think he gets by the freshman here.  Dennis dec. Graff

149: #1 Brent Metcalf (Iowa) vs. #5 Kyle Ruschell (Wisco); Metcalf's 4-0 all-time against Ruschell, including a pair of major decisions and a pinfall.  Ruschell's good, but he doesn't give Metcalf fits in the same way that Palmer does.  Metcalf maj dec. Ruschell.

165: #4 Ryan Morningstar (Iowa) vs. #1 Andrew Howe (Wisco); By contrast, Morningstar is 0-3 against Howe, with all three losses coming last year.  In true Morningstar fashion, all three losses were achingly close (a pair of 2-1 losses and a 4-3 loss, all in OT).  Given that Morningstar could easily face Howe again at the Big Ten and NCAA Tournaments, a win here doesn't really mean much expect providing a boost for Morningstar's psyche.  I think he'll have to wait for that.  Howe dec. Morningstar

Beyond that, the only other ranked wrestler Wisco has is at 197, where #7 Trevor Brandvold should be able to take care of Lofthouse.  But aside from that match and the three matches above (and, really, only 133 and 165 are decent bets for Wisco wins), I struggle to see where Wisco has good opportunities to get points off Iowa.  Iowa's inconsistent at 157 and (to a lesser extent) 184, but Wisco doesn't have great options there (although Travis Rutt was ranked at 184 for them until recently).  They also have very weak spots at 125 and 174... only two of Iowa's strongest weights.  I look for a final score along the lines of 32-6, Iowa.

The meet itself is at 3pm CST on Sunday, but it's tape-delayed on BTN until 10pm CST on Sunday; there should be a BTN.com live stream ($3) available for this meet, though.