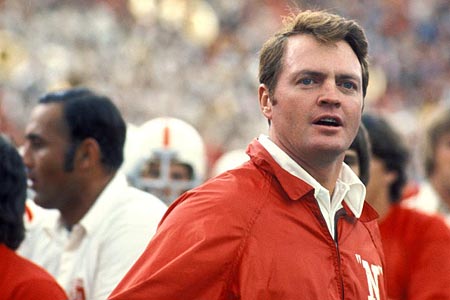 Last year, when We Will Always Have Tempe discussed the possibility of Nebraska joining the Big Ten, I jumped into the comment section to shoot it down.  There were questions of academics and traditional rivalries, but in the end the strike against Nebraska was the presence of athletic director Tom Osborne, former ruler of the Big 8 Conference.  Surely the man who went toe-to-toe with Barry Switzer and won two* national championships for the Big Red wouldn't leave tradition behind to join the uppity Big Ten, right?

"We haven't entered into any formal talks with anybody right now," Osborne said. "We're focusing on the Big 12. But I don’t think that means if somebody wanted to pick up the phone and call us, that we'd hang up on them. You listen...."

"I would have to say the center of gravity has moved south. You’d have to say that trend to the south still continues to this day, which is a little concerning sometimes for people in the north part of the Big 12."

Rittenberg is correct: For Nebraska, it's all about the Benjamins.  If EDSBS's math is correct (though you really shouldn't trust numbers from a man named Swindle), NU would triple its television revenue by moving from the Texas-centric Big XII contract to the Big Ten Network.  The Big Ten would essentially be making Nebraska an offer it can't refuse.  Given the current state of Nebraska-BXII relations, the timing has never been better.

Of course, that assumes the move makes sense for the conference and, if the Big Ten is only adding one additional team this time, it probably doesn't.  Nebraska has been a member of the Association of American Universities for a century (a deal-breaker for the CIC if you aren't Notre Dame), but their graduate research programs would place them squarely at the bottom of the CIC.  While the Huskers remain a national name in football, they are now more than a decade removed from their last national championship and haven't been to a BCS game since getting trounced by Miami in the 2002 Rose Bowl; over the last decade, NU's winning percentage is lower than Iowa's.  They are the equivalent of Penn State in men's basketball.  It opens up little recruiting territory that wasn't already available.  And Jim Delaney doesn't stay up at night asking how he can break the Big Ten Network into the illustrious Omaha and Lincoln markets (where BTN is already available on the sports add-on from the local cable monopoly).  Basically, the Big Ten would give Nebraska about $13M per year, for which Nebraska would give the Big Ten a championship game, bad basketball, Mike Nobler, and Runza sandwiches.

There are three constituencies at play in Big Ten expansion plans: The academics, the athletic departments, and the television arm of the conference.  There are two rumored candidates who are palatable to all three: Texas and Notre Dame.  As we know, Texas' geographic issues (and political situation) and Notre Dame's traditions (and hesitancy to share research goals with 11 secular institutions) make those unlikely.  This is why I am more certain of a three-team expansion bonanza with each passing day.  The academics of Pittsburgh, the national brand of Nebraska, and the new television markets of Missouri would make everyone happy and make more money for everyone involved.  If the Big XIV is coming, Nebraska makes sense.  But if expansion scenarios continue to focus on one new school, the dust will eventually settle, and Nebraska will still be handing wheelbarrows of cash to Texas.