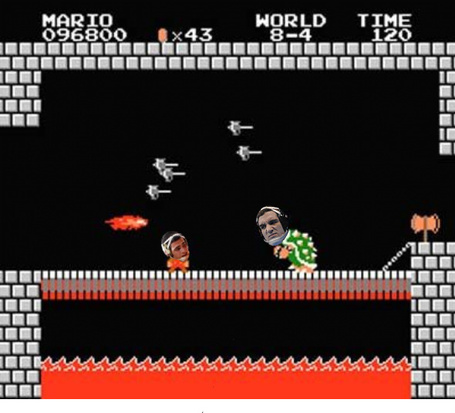 Do Not Mess With Koopa! (H/T to HFMR for his inimitable assistance)

125: McDonough's made the most explosive debut to the Iowa line-up since Metcalf three years ago and they best debut by a freshman since... well, a really long time, I'm betting.  (Metcalf's freshman year was wiped out by the transfer from Virginia Tech, remember.)  He continues to just take it to guys -- ranked, unranked, it doesn't seem to phase him.  His freakish combination of strength and lankiness has made him a nightmare match-up.  To be fair, Sanders was obviously a bit hobbled in this match, but McDonough was still something to behold.  His relentless style echoes Metcalf and the fact that he's doing all this while still just a freshman is a little mind-blowing (and tremendously exciting).

133: This looked like a troubling match going into the meet and it turned out to be exactly that.  Dennis edged him in a pair of close matches last year, but his slightly inconsistent form coupled with a very strong outing by Ness resulted in a nightmare showing for Dan.  Full credit to Ness, though: he came out and really took the action to Dennis and he was also able to capitalize nicely off of Dennis' offense at times.  There's no shame in admitting that he was the better man tonight.  For Dennis, it's back to the drawing board; he's run hot and cold since returning from his ankle injury about a month ago and this was not one of his better outings.  He has a few weeks to get things figured out before the Big Ten Tournament -- where difficult rematches with Ness and Gomez likely loom.

141: What a phenomenal showing by Marion here.  He looked like a guy who was was oozing with motivation to avenge the shockingly fast pinfall loss he suffered to Thorn at the National Duals this year.  His offense was at its explosive best here, his defense was solid (aside from a brief brainfart that allowed Thorn to get a reversal off of a Marion takedown), and he did a great job of pouring it on late to secure the major decision.  With the looming threat of Slaton coming back and taking his job now finally banished, maybe Marion can finally settle into his spot here a bit; if he can wrestle like this the rest of the way, he can go far in March.

149: Mason came out to the theme from Super Mario Bros. (and I'm not gonna lie: that was awesome) and even managed to exploit Metcalf's over-aggressiveness at least once to score a takedown of his own.  And that was it in terms of highlights for Not-So-Super Mario.  Metcalf came perilously close to pinning him in the first minute of the match, poured on ten points in the first period alone, and easily racked up a tech fall after Mason gassed out; he was just ruthlessly taking him down and cutting him loose at one point.  Sometimes Koopa does win, bitch.

157: After four exciting, action-packed matches, the energy level of the dual took a nosedive here and never quite recovered the rest of the night.  This was also the match where it became a foregone conclusion that Iowa was going to win; it would be three more wins before they could officially secure the victory, but if their heavily-favored senior leader could only manage a decision victory against an unranked Iowa guy... well, the odds of them pulling off a miracle comeback in the second half of the meet were basically nil.  Had Schlatter managed to get a tech fall or a pin, though, and chopped the Iowa lead to 4-5 points, though... who knows.  Schlatter's performance here was practically Varner-esque in its slovenly acceptance of an easy decision win over an overmatched opponent when his team needed much more out of him.

Kerr's approach to the match also bears discussion.  He purposefully wrestled a very defensive and non-aggressive style, which probably helped partially stifle Schlatter's attack and kept him from getting bonus points.  He seemed deathly afraid of being too aggressive and putting himself in a damaging situation (a fear which was probably well-founded, based on the fact that Schlatter came close to getting him on his back after his first takedown), which seemed to dictate his more passive approach.  That was a strategically sound decision... but also a decision that was fundamentally at odds with Brands' coaching philosophy, which was very apparent in the barely-concealed disgust in Brands' halftime remarks.  Brands' frustration at 157 is no secret (and Andy Hamilton wrote a nice article on Sunday delving into this very issue), and this match did nothing to ease that frustration.  Kerr's approach might have been appropriate for this meet, but it did nothing to solve the conflict at the spot for the rest of the season.

165: Ah, Morningstar.  After a typically cagey (read: boring and inactive) first period, Morningstar used his superior riding skills to choke the life out of Yohn -- almost literally (he was damn close to locking him in a rear naked choke at one point).  He powered him over into a pair of nearfall opportunities and refused to allow him to get up.  It wasn't exactly pretty, but it was brutally effective and, hey, bonus points out of Morningstar?  That's just fucking gravy.

174: In the open thread, I opined on the differences between Borschel and Metcalf and they were never more evident than tonight.  Metcalf is all action and aggression; he looks like a giant fast-twitch muscle out to murder you in a flurry of action and then move on to the guy next to you.  Borschel is laconic and technical; he's a fist patiently grinding you to dust.  Metcalf's a cobra; Borschel's a python.  Granted, Borschel's still capable of whip-fast takedowns and reversals, but his primary strength seems to be controlling guys on the ground, locking their arms in place, and maneuvering them into position for a nearfall or pin.  It's not as flashy or as attractive as Metcalf's style, but it's undeniably effective.

184: Keddy returned to the line-up and continued to look slightly improved.  He scored a pair of nice takedowns, got his usual lightning-quick escape, and spent most of the rest of the match methodically riding Young out.  Not much to it, but given the ups and downs of Keddy's season, we'll take a few baby steps of progress for now.

197: After putting together a string of good performances, Lofthouse had a pretty bad showing here.  He couldn't do much at all against Yohn -- and couldn't stop Yohn all that much, either.  Slightly disappointing, but overall we're still very pleased with his fill-in efforts while Beatty's been out.

Hwt: Big Dan's cardio definitely seemed lacking in the third period as he got an uncharacteristic penalty for stalling that wound up sending the match to OT.  He managed to prevail anyway after summoning up enough energy to get a nice takedown (his second of the match, in fact), but overall this was an underwhelming outing for Erekson.  He didn't seem nearly as aggressive as normal and it was unusual for him to let Berhow back into the match the way he did.  Hopefully this was a bit of a fluke.

All in all, though, this was an excellent win; anytime you can go into a hated rival's gym and beat them by nearly twenty points, you've had a very, very good night indeed.

NEXT: #3 Ohio State comes to Carver on Friday at 7pm CST; the meet is on BTN, albeit tape-delayed until 10pm CST Friday night.