Share All sharing options for: Two Quite Off-Topic Things To Mention Because This Is My Blog And You Can't Stop Me And It's Either This Or Iowa Basketball 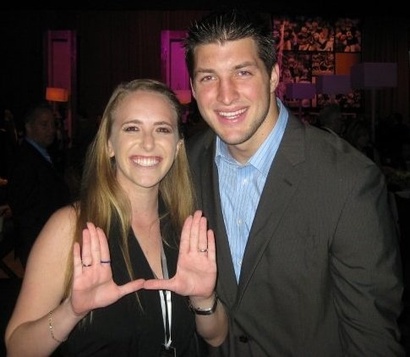 1) This is pretty awesome. Not because we're instinctually opposed to Tim Tebow as a human being or anything, mind you--we're more opposed to the tone of his coverage and other things over which Tebow has little control. So when Tebow sidles up next to a young lady who throws up the U for the camera, well, you have our attention.

And look, it's not just that The U is some code for a secular, decadent lifestyle that runs contra to Tebow's work (even though that's exactly what it is; Canes fans fuck on piles of cocaine and other people who are also fucking). The point is that it has everything to do with Miami. Like, if I ever ran across Todd Bandhauer or Julius Michalik or Lafester Rhodes and could take a picture with him, the first thing I'm going to do is throw up an Iowa sign. Maybe two index fingers up. Whatever it is we do. I guess we don't have a sign.

2) Here's an hour-long set on Austin City Limits from Them Crooked Vultures--a.k.a. Dave Grohl on drums, QOTSA's Josh Homme on vocals, and John Paul Jones on bass/keyboard. Yes, THE John Paul Motherfucking Jones. They sound amazing. My face has been completely rocked off. Watch this right now. I'm not kidding.