We Must Break You: Gopher Pelts Are The Worthless Pennies Of The Fur Trade

Share All sharing options for: We Must Break You: Gopher Pelts Are The Worthless Pennies Of The Fur Trade

HATE WEEK hits wrestling this week, as #1-ranked Iowa heads up north to the Twin Cities to take on their top Big Ten rival, the Minnesota Jaundiced Rodents.  But first... 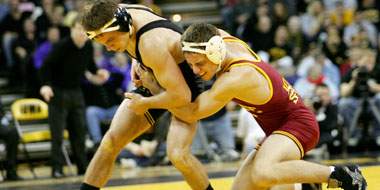 Sadly, university rulings cannot be escaped quite as easily.

So long, and thanks for all the fish.  The long, strange trip of Joe Slaton's Iowa career seems to have come to an end this week, as Bloodpunch himself declared that Slaton's appeal to regain his eligibility had been denied:

"Joey has been working through a University review process," Iowa Athletics Director Gary Barta said in a statement e-mailed from the Iowa sports information department. "The process has been completed. As a result of the findings and in conjunction with Big Ten rules, he is not certified to compete."

Slaton was one of the infamous Virginia Tech transfers and has had a tumultuous collegiate career since graduating from Cedar Rapids Kennedy five years ago.  He signed with Brands while he was at Virginia Tech, redshirted his freshman year, then followed Brands to Iowa the following year (and losing another year of eligibility in the process), won the starting spot at 133 lbs. the first he was eligible to compete at Iowa, going 31-5 and finishing as the NCAA runner-up in 2008.  Last year he struggled to make weight at 133 and fend off an improved Dan Dennis and ultimately wound up sitting behind Dennis the entire year (he was evidently neither big enough nor good enough at the time to supplant the then-starter at 141 lbs., Alex Tsirtsis).  He moved up to 141 lbs. this season but has been academically ineligible (and that run-in with the ICPD last fall, too) and unable to officially compete for Iowa all season.  Barring a last-minute reprieve by UI President Sally Mason, his collegiate career will be over, having only been able to really strut his stuff for one full year.

And then McDonough made the best decision of his entire life.  Andy Hamilton checks in with a story about the best surprise of the season so far, Matt McDonough, and the story of his recruitment.  Apparently he almost chose (gasp) just Northwestern over Iowa:

"I was one minute away from dialing the number for (Northwestern coach) Tim Cysewski. But there are so many wise people who can help you out when you're getting recruited and tell you the important things to think about instead of worrying about money and all the hoopla that's not important in the grand scheme of things.

"Really, it's about where you're most suited to a get a degree and win national titles. I pictured myself where I'd want to be wrestling the most and where I could get a good degree, and I couldn't leave Iowa when I had bled black and gold since I was born."

Matt, you made a very wise choice.

This ain't Big Ten wrestling, brother, this is intramurals!  Are you eager to hop into a singlet and roll around on the mat with other dudes, but neither talented enough nor psychotically driven enough to wrestle for Tom Brands?  Good news!

For all those Brent Metcalf-wannabes who want to take part in the state’s strong wrestling tradition but can’t suit up in Black and Gold, there is a solution: intramural wrestling.

If Tom Brands told us to jump off a cliff, we'd totally do it.  Our man-crush on Tom Brands is no secret; and articles like this only add more logs to the bonfire of that love.

After three years of winning world championships, Brands realized his lifelong dream in 1996, winning the Olympic freestyle gold medal at 136.5 pounds in Atlanta.

"I trained my whole life for it. I expected to win it," Brands said. "I remember (Mark) Ironside was balling, my wife was fired-up, Terry got out of the arena and was slapping everyone's hands and Gable was hyperventilating before the semifinal match."

Tom Brands is fucking awesome.  Also in that article: Gable gives Brands high praise and Brands talks about Legos and the fact that his daughter wrestles.  I suspect she's far younger and smaller than me, but I'm equally sure that she could still kick my ass.

Rankings validate our self-worth.  Oh, and our awesomeness, too.  Updated rankings -- unless otherwise noted, assume that the rankings are unchanged from last week.

Not too much of note this week.  AWN is clearly the most volatile of the rankings and they seem to have more faith in Keddy than his results this year might deserve, frankly.  A little odd to see Marion drop two spots after a dominant win, but perhaps it's a delayed response to his upset loss in the Penn State dual.  The only really big head-scratcher is Dennis' ranking by WIN, but perhaps they're just docking him for missing a bunch of matches.

just Northwestern Institute of Business and Asshology?  Welcome to the slaughter.  If just Northwestern thought the monkey wrench we threw into their NCAA Tournament hopes was bad, just wait until the Iowa wrestling team flays the jNWU squad and serves them for dinner with a nice red wine on Friday night.  As a team, Northwestern is unranked and sports a record of (5-10-1, 0-5 Big Ten); as individuals, they have all of one guy ranked in the top 20 in any weight class.  That would be junior Andrew Nadhir... at 149 lbs.  D'oh.  The purple kitties have gone a long way from the days when they had Brandon Precin (125) and the unstoppable Jake Herbert (184) in their line-up.  So, yeah, another Iowa rout appears to be in order.  Could it be a third straight shutout for Iowa?  Possibly, although it will be difficult to avoid any upsets for a third straight dual.  No TV coverage of this dual (7pm CST, Friday, February 12), although it will be on the radio (AM-800 or All-Access via the interwebs) and live streamed at BTN.com ($2.99).

"No, Mr. Robinson.  I expect you to die."  HATE WEEK rolls on northward as Iowa heads up to the Twin Cities to face the #5 Minnesota Golden Gophers (11-4, 6-0 Big Ten) on Sunday, February 14, at 6pm CST.  In addition to the usual radio coverage, this one is also live on BTN, so you can watch it on the ol' tee-vee.  So Sunday is not only for doing nice things for your significant other (or drinking heavily to avoid the nauseating sight of lovebirds if you don't have a significant other), it's also for watching the Hawkeyes attempt to rend the Gophers asunder on the mat.  Iowa has defeated them once already this year, 28-12 at the National Duals in January, but that was a depleted Gopher team missing its two best wrestlers (Jayson Ness at 133, Dustin Schlatter at 157), so it's probably imprudent to expect another ass-kicking just like that.  Although the Hawks were also without the services of two of their own All-Americans in that meet, Dan Dennis and Dan Erekson, so hey.  It's a slightly unusual meet in that Iowa's usual massive advantage at the lower weights is largely negated by the fact that Minnesota has some very good guys in those weights, too.  On the other hand, Iowa has some significant advantages at the upper weights.

133: #3 Dan Dennis (SR, 13-1) vs. #1 Jayson Ness (SR, 21-0)
Dennis has a 2-0 career record against Ness, knocking him off 6-4 at last year's National Duals and 9-7 in last year's dual meet encounter.  Since returning from an ankle injury earlier this season, Dennis has been a little shaky; he lost late to Okie State's Parks, but picked up an impressive win over former #1 Franklin Gomez, too.  He struggled badly with an unheralded Utah State guy and needed a last-second takedown to secure the win.  Hopefully we see the Dennis that knocked off Gomez and not the one who struggled in Utah.  But at the moment, Ness seems to be wrestling just a touch better.
Ness dec. Dennis (3-3)

141: #7 Montell Marion (SO, 16-3) vs. #6 Mike Thorn (JR, 20-4)
These two also met at this year's National Duals... and the result was not good for Montell; Thorn pinned him in just 0:42 seconds.  That's been the biggest fear with having Marion in the line-up over Slaton this year; when he's on, Marion is excellent and capable of beating damn near anyone in the weight class.  When he has a mental lapse, though, he can just as easily lose to anyone in the weight class -- or get stuck by someone if his opponent is really good.  It seems unlikely that Marion will get caught again (the PSU match aside, he has been wrestling very well lately), but the Hawks probably aren't going to win all of these toss-up matches and Thorn did beat him once...
Thorn dec. Marion (6-3, Minnesota)

149: #1 Brent Metcalf (SR, 25-0) vs. #16 Mario Mason (rsFR, 15-6)
At the National Duals, Mason wrestled up a weight at 157 and avoided Metcalf.  No such luck on Sunday.  Metcalf is an absolute animal right now and has two goals in mind: another national championship and the Hodge Trophy.  No amount of magic mushroom power-ups can save poor Mario here.
Metcalf PIN Mason (9-6, Iowa)

157: Jake Kerr (JR, 8-6) OR Aaron Janssen (JR, 10-4) vs. #2 Dustin Schlatter (SR, 12-1)
Schlatter began his career at 149, then moved up to 157 this year and even spent a few weeks at 165... but wherever he's been, he's been a force.  It would be wonderful if Kerr or Janssen could spring an upset on him like Kerr did to Sanderson a few weeks ago, but that doesn't seem too likely.  The primary goal here should just be keeping the damage to a minimum; in that sense, Kerr is probably the best choice.
Schlatter dec. Kerr (9-9)

165: #4 Ryan Morningstar (SR, 20-3) vs. Cody Yohn (rsFR, 19-10)
These two didn't meet at National Duals; instead, Morningstar tech falled Joe Grygelko, 17-2.  Read that again and let it sink in: Morningstar tech falled a dude.  Yes, Mr. If-I-Kept-It-Any-Closer-To-The-Vest-It-Would-Be-Under-My-Skin actually had enough offense to tech fall a dude.  Sadly, Mr. Grygelko is unlikely to get the nod again Sunday so we won't get to see what Morningstar could do for an encore.  On the bright side, Mr. Yohn isn't that great, either.  Dare we dream of bonus points from Morningstar again?  Let's not get crazy.
Morningstar dec. Yohn (12-9, Iowa)

174: #2 Jay Borschel (SR, 24-0) vs. #8 Scott Glasser (JR, 27-4)
JayBo is a man on a mission right now, and that mission involves bringing pain and suffering to anyone he encounters at 174 lbs.  He major decisioned Glasser at the National Duals this year, 11-3, and we haven't seen a single thing from him since then that should indicate a contrary result.
Borschel maj dec. Glasser (16-9, Iowa)

184: #12 Phil Keddy (SR, 18-6) vs. Kaleb Young (SO, 7-12)
Fresh off his successful homecoming in Vernal, UT, Keddy gets a bit of a gift in his return to Big Ten competition.  We've talked at length about Keddy's struggles this year, but Young seems like an excellent opponent to help continue this recent momentum.
Keddy maj dec. Young, 20-9, Iowa)

197: Luke Lofthouse (JR, 17-11) vs. #12 Sonny Yohn (20-9)
Lofthouse is another guy who's been wrestling well lately; ever since "The Leg" figured out how to convert all of those single-leg shots into some actual takedowns, he's done a very satisfactory job of filling in for the injured Chad Beatty.  Yohn beat him 6-1 at this year's National Duals, and in spite of Lofthouse's improvement, we're not ready to pick him to win just yet.
Yohn dec. Lofthouse (20-12, Iowa)

Hwt: #10 Dan Erekson (SR, 4-0) vs. Ben Berhow (JR, 16-9)
Erekson has made an impressive return from his pec injury and should be able to keep things rolling against Berhow.  Erekson beat him twice last year (3-2 at National Duals and 10-4 at the NCAA Tournament) and he's just simply better than Berhow.  His conditioning is still a work-in-progress, so the guess here is that he gets a couple of early takedowns and then holds on for the win.
Erekson dec. Berhow (23-12, Iowa)