Share All sharing options for: It's Not Plagiarism If You Link to It Speaks Russian in French 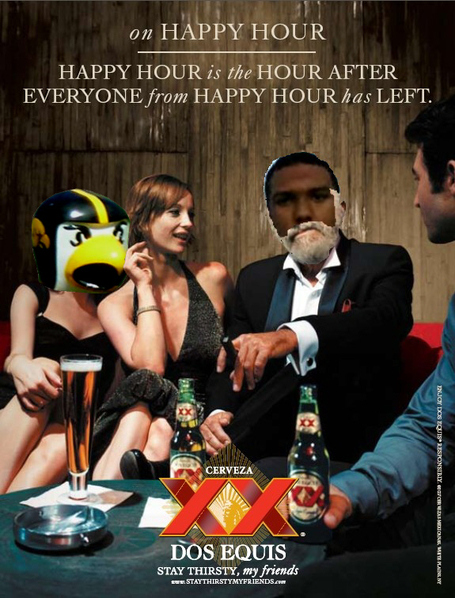 His Reputation is Expanding Faster than the Universe.  We're not entirely certain if it's a good thing or not, but we are learning amazing information about the incoming recruiting class of 2010 through Marc Morehouse's ongoing series of "Ferentz on High School Kid" posts.  They would be creepy if they weren't so fascinating.  Case in point: Incoming halfback Marcus Coker, who might be the most interesting man in the world.  Not only did he run for 400 yards in a game against two Iowa defensive recruits at Gilman (and their coach Biff Poggi, included just so we can again say "Biff Poggi"), but he's majoring in astrophysics and was twice named state "Gentleman of the Year" for his dedication to community service.  In other words, Marcus Coker is a real-life Bill Brasky, and that's enough to make him my favorite Hawkeye before he even hits campus.

Tonight, Tonight.  Iowa welcomes just Northwestern College to the friendly confines of Carver Hawkeye Arena tonight (7:35, Big Ten Network, Iowa +3).  The empty seats should make just Northwestern feel like they're watching a home football game.  We'll be here with the Open Thread as usual, though we may need to bring our troll repellent.

Tonight's big news -- other than the fact that only Northwestern Technical College is just a 3-point favorite -- is the potential return of Anthony Tucker.  Lickliter left the door open:

Lickliter still wouldn’t say Monday if Tucker might find his way onto the court in today’s 7:30 p.m. home game with Northwestern.

"There is a chance as long as he’s dressed. The evaluation is ongoing, and we’ll see," Lickliter said, providing few other hints as to when or if his team’s second-leading scorer might play again....

"The guys who have been out there have played some pretty good basketball at times," Lickliter said. "It’s one of those things. What happens is that you have to move on, and our team has developed in the way they play since Anthony has been out."

We didn't say it was likely he's playing; Lickliter will probably have to stop talking like a jilted former lover before he lets Tucker back on the court.  Nevertheless, with every day we are closer to the inevitable re-benching of John Lickliter.

The Traditionalist.  For those of you who, like us, think the as-of-yet-unproposed expansion of the NCAA Basketball Tournament field to 96 teams is a travesty on par with the trapping of the British army at Dunkirk and the cancellation of the short-lived Fox drama Skin, you have an unlikely friend: Big Ten commissioner, and noted moneychanger, Jim Delaney:

I don't know about threatening the popularity of the tournament as much as having more dilution of the regular season. I do think the tournament is elegant in the way that it's structured, but I'm more concerned about, "What does this mean for the sport of basketball from November through March?" I don't think it would make the tournament less popular. It would affect it in some ways. There'd be different kinds of competition in the first and second round.

A lot of our interest is local: People coming to our games, being interested in our championships. I've always seen the tournament as a great event, but I've never said or believed that it didn't have a negative effect on the regular season.

Delaney is surely correct that a dilution of the tournament field would only further reduce the value of an already-devalued regular season.  Under the current system, the tournament field includes approximately the top 46 teams (with the rest of the spots going to automatic qualifiers who would otherwise be left out).  In a 96-team field, that number balloons to 78.  It's the difference between the bubble as we know it (the current RPI #46 team is 17-6 Missouri) and a bubble of abject mediocrity (#78 is Southern Cal, languishing at 14-9 in an awful Pac-10; #79 is North Carolina, which is now RORth Carolina).

The obvious joke to make here is that Delaney would rather have pollsters and computers choose the top two teams according to an arbitrary formula, then have the Big Ten champion play the Pac-10 champ on UCLA's home floor.  But there is a valid point in the BCS joke.  If the tournament is meant to crown a champion, the field as it stands now is too big; there are maybe 10 teams in any given year that are deserving of championship consideration.  If the tournament is meant as spectacle, it is perfect as is; every year produces a massive upset or two, and generally the cream rises to the top.  But expanding the field and giving the top 32 teams a bye would only make the first round not-ready-for-prime-time viewing, put another layer of middling big-conference teams between Cinderella and the ball, and further reduce the relevance of the regular season.