Share All sharing options for: The Aughts in Review: Sparty Bein' Sparty

Continuing our look back at the decade that was in Iowa football, celebrating the highs and the lows -- and, hopefully, distracting us from the ongoing disaster that is Iowa basketball.  This series looks back at Iowa's results across the entire decade against every Big Ten foe, as well as Iowa State.  According to the alphabet, next up is Sparty.

MICHIGAN STATE SPARTANS
Iowa vs. Michigan State in the 00s: 5-3 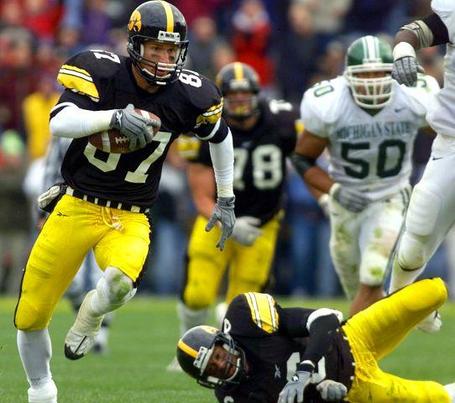 Kevin Kasper: faster than you remember.

BEST WIN: Iowa 21, Michigan State 16 (2000)
Aside from the '02 and '04 incarnations, Iowa-MSU games in the Aughts have not exactly lacked for drama; in fact, the last three games in the series have all been decided either late in the fourth quarter or in overtime, highlighted by this year's insane walk-off finish.  Iowa's win in 2000 wasn't quite as dramatic (although it was pretty exciting in its own right), but it was incredibly significant.  Not only was it Iowa's first win over a Big Ten opponent under Kirk Ferentz, it was their first win period in thirteen games (including nine straight losses in BXI play).  That it came against a team that had obliterated Iowa 49-3 the previous year (a score that could have been even worse if not for a rare bit of mercy from Nick Saban) only made the win even sweeter.  The game itself was thrilling, with Iowa needing a 90-yard kick return touchdown from Kahlil Hill, a fourth-quarter touchdown drive, and a few late stops to secure the win, but what the game represented was even more significant.

The game represented nothing less than hope, something in short supply during the first 16 games of Ferentz's Iowa tenure, when Iowa's lone win came over Northern Illinois and when they were blown out repeatedly.  Between Iowa's struggles and the fact that the popular choice to replace Hayden Fry, Bob Stoops, had Oklahoma marching to a national title, Ferentz needed to give Iowa fans something to feel good about -- and some reason to have faith in the future.  It would take another year and a half for the turnaround to be completed, but the seeds of all of Ferentz's success at Iowa first began to bear fruit in that '00 game against Sparty.  That win was the first sign that maybe Ferentz wasn't totally out of his depth and that maybe Iowa hadn't made a terrible mistake in making him Fry's successor. 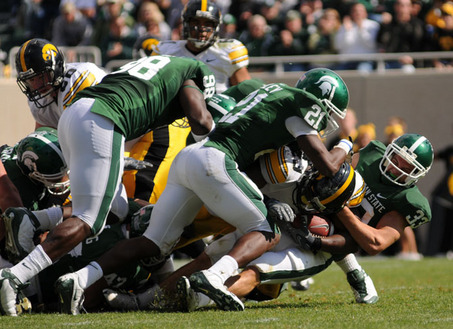 WORST LOSS: Michigan State 16, Iowa 13 (2008)
If the '00 win was the first sign that perhaps Ferentz had a little magic in him after all, the '08 loss seemed like further confirmation that whatever magic he'd once had at Iowa was long gone.  It was Iowa's third-straight loss by less than a touchdown and the latest in a long string of close losses.  BHGP wisely avoided the ORF WIV 'IS HEAD calls from the mouth-breathers back then, but it's not exactly going out on a limb to note that the sentiment was not exactly in Ferentz's corner back then.  Between the football team's disastrous off-field escapades and the their deep funk on the field (15-16 since the start of '06), there wasn't a lot of positive mojo surrounding the football team at that point.

The game itself was frustrating, as all games in this category are wont to be.  Iowa outplayed Michigan State for most of the game, with Shonn Greene decisively outplaying his more-hyped counterpart, Javon Ringer.  But three first-half turnovers (two deep in Sparty territory) from Ricky Stanzi proved damaging and a blown fourth down play late in the game (when Shonn Greene, in the midst of the greatest season every by an Iowa running back, was unable to get one measly yard) proved disastrous.  Rough stuff.  Still, in and of itself this loss was annoying, but hardly catastrophic  (although it may have proved decisive in determining whether Iowa wound up in the Capital One Bowl or the Outback Bowl last year); what elevates its status as a signifier of noteworthy FAIL is the fact that it just happened to be the latest example in a long string of games and plays indicating Iowa's inability to get over the losing hump.  (Is this a bit of a stretch?  Perhaps, but let's be honest here -- no loss to MSU in the Aughts was ever really fraught with significance or notably painful.)

MICHIGAN STATE IN THE AUGHTS

As fine a collection of coaching acumen as the Big Ten has ever seen.  Or not.

Michigan State was the ultimate yo-yo team in the Big Ten in the 00s, more lacking in stability and consistency than any other Big Ten team.  Sure, other BXI teams were worse (Indiana, Illinois), but at least they were more consistent: aside from a few years, you could pretty well count on them to be bad.  Michigan State had consecutive winning seasons only twice all decade (2007-2008) but also had consecutive losing seasons in one three-year stretch.  That said, there was one consistent thing about Sparty in the Aughts, which was their tendency to fall apart late in the season (especially under John L. Smith, who made an artform out of late season implosions).  After opening up 3-0 in '00, they went on to lose six of their final eight games.  In '01, they lost three in a row in November after starting out 5-2.  They lost six of their last seven games in '02, four of five games in '03 (wasting a 7-1 start), four of five games again in '04, six of seven games in '05, and eight of nine games in '06.  New coach Mark Dantonio turned things around slightly in '07 and '08, but Sparty was back to their old tricks in '09, losing four of their final six games.

Perhaps no series better summed up the self-destructiveness that characterized MSU in the Aughts better than this series right before half in the '05 Ohio State game.  Already up 17-7 in the Horseshoe and lining up for a field goal to push that lead to 20-7, things go disastrously wrong.  Rather than spike the ball and stop the clock (it was only third down), the coaches rushed the field goal unit onto the field and had them hastily attempt the kick.  It not only failed, but it failed in spectacular fashion, getting blocked and run back for a touchdown.  All of a sudden what seemed like a 20-7 lead at halftime was transformed into a 17-14 lead, all of Sparty's momentum had vaporized, and John L. Smith was about to become immortalized for his freakout:  "THE KIDS ARE PLAYIN' THEIR TAILS OFF AND THE COACHES ARE SCREWIN' IT UP!"  The fact that this meltdown wasn't even the most painful implosion of the John L. Smith Era (that distinction probably goes to the '06 Notre Dame game, when they somehow managed to blow a 16-point lead with barely over eight minutes to play, leading to this infuckingcredible rant) says everything you need to know about the John L. Smith Era.  The sad thing?  The Bobby Williams Era wasn't much better (lowlighted by the team literally quitting on the '02 season), although at least they won a bowl game (the immortal '01 Silicon Valley Classic). (In fairness, the Mark Dantonio Era has gotten off to a better start, with two bowls in his first three years, so he's already doing better than either Smith or Williams.) 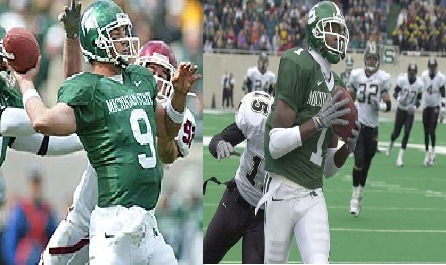 Much like the American auto industry, there is literally NO WAY for these men to fail, right?  Right?!

Not helping matters?  The fact that two of their most famous offensive players (Jeff Smoker, Charlie Rodgers) of the Aughts are best known for being, respectively, a crackhead and one of the biggest NFL draft busts of the decade.  In fact, Michigan State is notable for going after off-field trouble with gusto.  Far be it from an Iowa fan to cast too many stones about that sort of thing, but it is pretty damn remarkable when you have a starting quarterback checking himself into rehab for a substance abuse problem or at least thirteen players being involved in an incident where they stormed a frat en masse and assaulted a bunch of guys.  Sparty don't play around with your piddly little DUIs and petty theft cases, man -- they royally fuck shit up.  After all, if you're going to break the rule, you might as well do so in style. 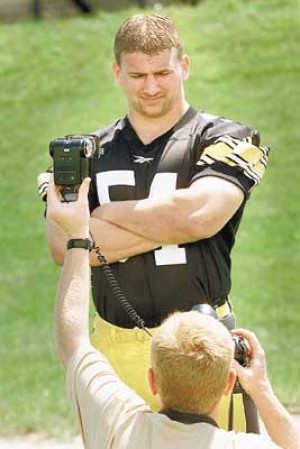 Aaron Kampman stops terrorizing quarterbacks long enough to talk about how awesome he is.

A slightly oddball choice, to be sure, but Kampman deserves some extra credit for his efforts for Iowa in the Aughts.  He was one of the players who bridged the gap between Fry and Ferentz -- and thus one of the guys who knew little but losing during his Iowa tenure.  He never got to taste the heights of success -- the BXI Championships, the BCS bowl bids, the national spotlight -- during his career; the most success he got to enjoy was a 7-5 season and an Alamo Bowl victory.  But he laid the groundwork for a lot of the success that followed.  Bob Sanders may have been the transcendent defender of the KF Era, the guy who set the tone for an entire team for years, but Kampman was one of the very best defenders of the KF Era.  He was first-team All-Big Ten as a senior and finished with 342 tackles, seventh-most in Iowa history (and a pretty damn staggering total for a defensive end).  And one of his most brilliant games as a Hawkeye was the '00 game against Michigan State, where Iowa recorded one of its biggest wins of the Aughts.  Kampman's stat line?  Oh, just 16 tackles, an interception, and a blocked field goal.  Nothin' special.  Just one of the finest performances from one of the finest Iowa defenders of the Aughts.