Iowa Hawkeyes Over .500 In Basketball; Will This Keep Up?

Share All sharing options for: Iowa Hawkeyes Over .500 In Basketball; Will This Keep Up? 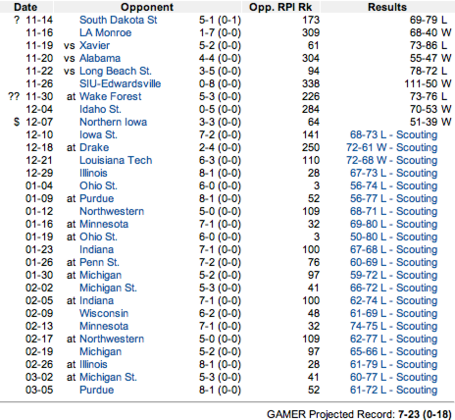 Okay, okay. That set of predictions, while mathematically accurate and based on a greater amount of available evidence than our opinions, probably isn't fair to the Iowa basketball team. Not only is Fran McCaffery the only new basketball coach in the entire Big Ten this year, his renovation efforts are even more extreme than with most coaching changes; Fran The Man isn't just changing the style of play in Iowa City, he's retooling the very physiques of the players.

Thus, while every single Big Ten team should be expected to improve at basketball between now and the end of the season, it stands to reason that Iowa should improve the most as the season goes along. In other words, by February or March, these projections by RealTimeRPI that incorporate only the first nine games of the season and put Iowa at 0-18 in the conference should be pretty well obsolete. Again, that's largely a function of Iowa's special condition of being in the first year of a new coaching regime implementing radical changes; if Todd Lickiter were still at the helm and RealTimeRPI's computers were saying the same thing, we'd have a very serious crisis on our hands.

That all aside, we need to steel ourselves for a particularly painful Big Ten conference slate this year. There's really no way around it. Iowa is, at this point, the unquestioned worst team in the conference, and 4-14 might be a rousing success in BXI play. This is McCaffery's reality this season, and anybody who disputes this need only observe teams like Wisconsin or Michigan State, who would regard Eric May as a solid sixth man, maybe give Bryce Cartwright or Melsahn Basabe eight minutes a game, and bury the rest of the Iowa team on their benches if given the chance to assimilate squads. Even with fellow cellar dwellers Penn State, how many Iowa players would start on that team? Two? You sure it's that many?

The thing to remember, though, is that McCaffery was able to recruit Melsahn Basabe to friggin' Siena, and then get Basabe to follow him to Iowa. Basabe, it should be known, is already starting and playing at a high level for this team. And he was set to attend Siena. Either McCaffery was a good enough recruiter to get BXI-caliber players onto a podunk campus like Siena, or Iowa was in such horrible shape that MAAC-level players can contribute from their first step on campus. Either way, McCaffery represents a step forward for the program; only the length of that step is up for debate at this point.