Share All sharing options for: It's Not Plagiarism If You Link To It Likes This Gary Ferentz Fella

You Can Incite a Riot, but You Can't Insight a Bowl.  In news that you've long since heard, Iowa will play Missouri in the 2010 Insight Bowl at Sun Devil Stadium in Tempe, Arizona on December 28.  For those of you who don't remember the last time Iowa played in Sun Devil Stadium, well, we're not going to be the ones to bring you crashing back to reality; suffice it to say, it wasn't pretty.  In fact, as we all learned in September, Iowa has been atrocious in the desert for nearly 30 years.  Throw in a 10-2 Missouri squad that beat Oklahoma and won its last three games (against middling opposition, but it's not like Iowa lost three games to the AFC East this November) and color us skeptical.

Despite bordering each other, Iowa and Missouri haven't played one another in a competitive football game in more than 100 years.  Some will want to bring up Schedulegate from some six years ago, when Missouri canceled the first two games of a four-game non-conference contract due to the fact that Iowa was 31-7 over the previous three seasons.  Those people are obsessed with the past and should be ignored; Iowa voided the contract after Mizzou backed out of the first pair of games, everyone's at fault, it's water under the bridge, etc.  Stop worrying about the past and start looking to the future, as Missouri has become fertile recruiting ground for Iowa in the last 5 years.  Adrian Clayborn, Marvin McNutt, and Paul Chaney are all Missouri transplants, as are a pair of freshmen.  Iowa hasn't received a commitment from any Missouri-based players yet this year, but Rivals lists 12 Show Me State prospects with high or medium interest in the Hawkeyes as we enter the final stretch of 2011 recruiting.  Given that these two programs have both enjoyed a return to prominence in recent years, every recruiting edge counts.  This game might not be as exciting as Iowa-Nebraska could have been, but it's probably more important.

Of course, it's still just the Insight Bowl, where things like this happen: 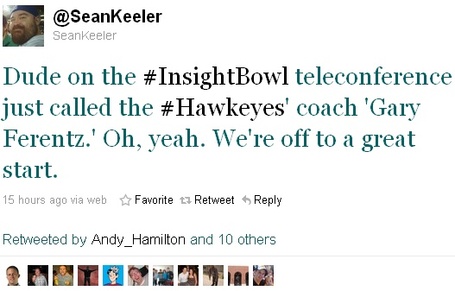 After that stellar beginning, Kirk Pinkel and Gary Ferentz did what you would expect: Smothered each other in praise and tried not to give the press a quote.  Mission accomplished on both ends, even when the questioner is stealing stats from BHGP:

Q. I know you had higher aspirations than 7-5, and you were right there in all five of the losses. If the games were 55 minutes long you might be playing in the National Championship game. With a senior team, how do you approach the bowl, and particularly on defense? Your thoughts on your defense? If you could stop a last drive, you would have been great. Last year you won all those games. This year you didn’t. Where’s your team mentally and what can you say about how your defense played this year?

COACH FERENTZ: That’s something we’ll find out in the coming months, and your research is really accurate. If we could have quit at 55, we’d have been in great shape. But that is the difference between winning and losing. We’ve been involved in a lot of close games, as you said.

Did you hear that, guys?  Ferentz just called us "really accurate"!  Nobody's ever said that about BHGP before!  More on the second press conference, with Ferentz and Barta, later this evening or tomorrow, because there's actually some usable information in that one.

If You Can't Barely Lose to Them, Join Them.  In one of the stranger turns of events in recent years, the short list for Indiana's coaching search might include...Ken O'Keefe?  When asked about it yesterday, Ferentz issued the standard non-denial denial, saying only that he understands four or five people have been interviewed and that questions on the Indiana search can probably be better answered by Indiana.  Morehouse doesn't buy it, and with good reason: There is a short and undistinguished record of Big Ten coordinators being hired as head coach by other Big Ten programs, and it's not exactly like O'Keefe's track record at Iowa has potential suitors beating a path to his door.  Ferentz could be doing one of two things here: Either KOK is one of the four or five people interviewed, a fact which Ferentz would obviously know (and could potentially get him in a little hot water, since, as far as I can tell, even Indiana hasn't confirmed it has conducted interviews), or Ferentz is helping position his friend for a raise.  If you put a gun to my head, I would break your wrist and take it from you like Steven Segal, but then I would say it's more likely than not that KOK has played footsie with Indiana but no more than that.

Chalk It Up to Bad Luck.  Now that the regular season is effectively over -- only the annual Army-Navy game is left to play before bowl season -- the statheads are getting to work and reaching the conclusion I have refused to accept since September: 2010 Iowa was really, really, extremely unlucky.  Year 2 of Team Speed Kills, the site that said Iowa was lucky in 2009 and set off a small donnybrook between us and mGo, found that the 2010 iteration of the Hawkeyes was the second-most unlucky team in the country by measure of actual wins versus Pythagorean wins, coming in only behind Louisville.  If my calculations are correct, Iowa had an expected win total of 8.12 in its 10 non-FCS games (so 9.12 with Eastern Illinois factored in) and came in more than two games below expectations.  The oft-cited mGoDiary from The Mathlete, written after last season, had Iowa at +0.9 wins last season and -2.8 for 2008 (it doesn't include its logic, though I'm assuming it's a Pythagorean projection).  Iowa was also tenth in the country in yards per play differential, and made Football Outsiders' top 30 in run-up-the-scoredness.  The lesson, as always, is that we're cursed.

Big Ten expansion appears to be complete for now, according to the Big Ten.  That, of course, led to speculation that the conference was going to add Notre Dame, Rutgers, Pitt, and Missouri next week.

Phil Steele released his All-Big Ten Team.  Clayborn and Sash are first-team selections.  Marvin McNutt, DJK, Karl Klug, Shaun Prater, and Ryan Donahue made the second team.  Adam Robinson, Allen Reisner, Julian Vandervelde, DJK (again, this time as kick returner), Colin Sandeman (punt returner), and Jeremiha Hunter got third-team selections.  The only quibble I have is with kick returning DJK, who led the conference in average return yardage and scored a touchdown against Minnesota yet is behind Troy Stoudermire and David Gilreath.

An Ohio State beat writer, doing a late post mortem of the Iowa game, can't figure out why the Hawkeyes continued to play a 4-3 defense when a nickel would have been much more effective against the Buckeyes' game plan of killing us with Sanzenbacher in the slot against our linebackers.  Said beat writer clearly doesn't watch too much Iowa game tape.