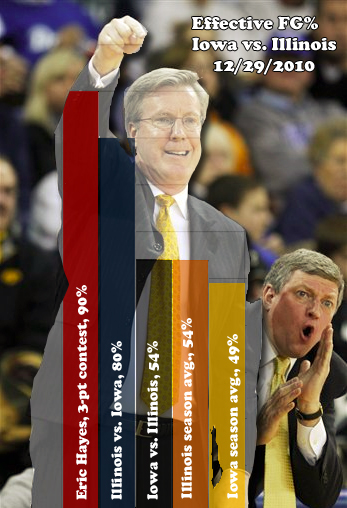 One of the neater advanced basketball statistics is something called effective field goal percentage (eFG%).  Basically this statistic accounts for the fact that three-pointers are worth more than two-pointers by giving them 3/2 more weight in the percentage calculation.  If a team makes a lot of threes and has an eFG% of 60%, for example, that team would need to make 60% of its shots to score that many points solely from two-point range.

Which is all a way of saying that Illinois was hot, hot, hot last night; Cinemax after dark hot; NBA-Jam hot.  The Illini made 19/30 two-pointers (63%) and 13/18 three-pointers (72%) for an eFG% of 80%.  To put this in context, Eric Hayes of Maryland, in his winning round at the 2010 NCAA three-point shooting championship, made 15 of 25 three-pointers for an eFG% of 90%.  Think about that.  One of the best three-point shooters in the country, in an empty gym, was only slightly more efficient shooting than the Illini last night.  The Illini are a good shooting team (note their season average eFG% of 54%), but 80% is ridiculous.

And it's why I think Iowa, despite losing by 10, played their best game last night.  Their defense had some problems in the first half locating open shooters (especially D.J. Richardson, who made 5-7 on threes), but at a certain point defense didn't matter.  Illinois was just very, very hot.  The Hawks looked like they were ready to fold starting the second half, giving up a couple quick shots and an alley-oop dunk (note to Fran: no more heavy gravy at half-time), but they gamely fought back behind Matt Gatens (21 points on 5-10 from three), Bryce Cartwright (13 points) and Devyn Marble (9 points, including a sick, Paul Pierce-esque baseline jumper where he drew contact and still made the shot).  Jarryd Cole was his active self on the boards (9 rebounds, 7(!) offensive) and on defense, and the Hawks just wouldn't go away, even though the Illini were burning down the house.

Sadly, the upset wasn't to be.  Iowa continued their free throw shooting woes, making a pitiful 8 of 15 at the line.  In one crucial sequence, the Hawks got the steal and Marble May was sprinting down the court for an easy dunk when an Illinois player whacked him (I was at the game so didn't see the replay -- anyone catch this?) and an intentional foul was called.  Marble May promptly missed both free throws, then Iowa missed its next shot, and Iowa wound up nothing from what could have been a four-point trip.  Down the stretch, Scotch-Soviet double-agent Demetri McCamey decided to take over, scoring three or four baskets, and that was all she wrote.