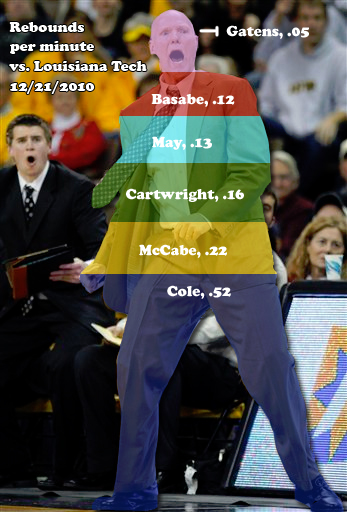 Two important things happened last night at Carver-Hawkeye Arena last night: 1) Iowa closed out its pre-Big Ten schedule with a convincing win over Louisiana Tech, and 2) Fran McCaffery foiled Lex Luthor's (pictured above) plan to take over the world coaching WAC basketball.  Actually, that is Louisiana Tech coach Kerry Rupp (no relation to Adolph as far as I can tell), who seems to be screaming in this photo "Curse you, Superman!"

But back to the game.  The Hawks came out looking sluggish, making their usual spate of unforced turnovers in the first half, and the Bulldogs kept the game close behind their Paul Millsap clone Olu Ashaolu, who caused major problems for the Hawks with his strength inside.  Luckily for Iowa, Ashaolu picked up his third foul early in the second half and had to sit for a while, allowing Iowa to build up a lead that they never relinquished.  Jarryd Cole really made a difference in the second half, when he dominated the offensive glass (beyond Ashaolu, Tech was pretty thin inside, and once he got in foul trouble, there was little resistance for Cole).  Matt Gatens was the MVP of the game, thanks to his hot shooting from outside (5-9 from three) and at the line (7-8).  And, in a positive development, the Hawks actually made a good percentage their free throws, going 18 of 23.  There was a bit of excitement in the last minute, as Louisiana Tech player Lonnie Smith knocked Gatens to the ground and Zach McCabe retaliated and pushed Smith.  Smith got an intentional foul call, McCabe was called for a technical, and Fran had a few choice words for Zach on the sideline.

It was also Fran McCaffery bobblehead night, which proved to be a sore disappointment for me.  I underestimated how popular a late December game against Louisiana Tech would be and didn't come early enough, which meant that my Christmas dream of a Fran bobblehead was not fulfilled.  I'm not bitter.  I mean, I did see you, woman with four bobbleheads, but I'm sure you had a good reason for them.  And you, high school kid with three bobbleheads, you must have needed them.  They looked more like Joel McHale bobbleheads anyway.  I certainly won't hold a grudge, or take out my revenge by featuring the opposing team coach in an article about the game.