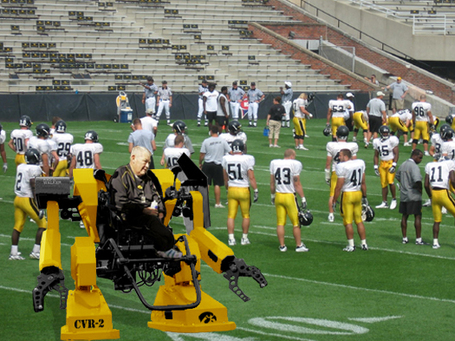 Iowa Defensive Coordinator Norm Parker will once again be roaming the sidelines at the Insight Bowl thanks to the University of Iowa Mechanical Engineering department. Parker, who missed time earlier this year and had to have his right foot amputated due to complications from diabetes, has been outfitted with a specialized walker/exoskeleton that will allow the coach to maintain his traditional presence with the players, as well as lift objects of up to two tons in weight. Professor Karoly Maciek explained the project: "The Coaching Vehicular Robot V2.0, or CVR-2 as we call it around the lab, will give Coach Parker the support and mobility he needs to maintain his traditional post on the sideline at the Insight Bowl. It will also allow him to throw a VW Bug 50 yards through the air."

The exoskeleton’s frame weighs 1500 pounds and is made of titanium and carbon nanomaterials. Hand-held servo controls allow Parker to walk, lift, and grasp objects with almost no lag time. The result is a suit that gives the 68-year old coach all the physical strength and mobility he needs to coach the defense, as well as to crush boulders into a fine powder. Parker, for one, is enthusiastic about the new device. "I’m still gettin’ used to this dang gizmo, but I gotta say it has its advantages. Just the other day, a lineman fudged up in one of our drills, and I was able to lift that guy in air and twirl him like a pizza pie. Haven’t been able to do that since 2001." Head coach Kirk Ferentz is also excited about the possibilities: "Having Coach Parker back on the sideline will be a big boost to the team.  And the fact that he can easily crush a Porsche Cayenne into a small cube is just a bonus.  Say, doesn't Gary Pinkel drive a Cayenne?  How 'bout that."

Professor Maciek reports that he has already received calls from coaches around the country who are interested in acquiring CVRs of their own. "We’ve gotten more than a few calls from Joe Paterno, and I guess Bobby Bowden has said that he could have coached 10 more years with a CVR-2." Other universities are reportedly developing their own coaching apparatuses, including Michigan State, which is working on a powered suit for Mark Dantonio with a built-in arc reactor to maintain proper heart function. Professor Maciek is skeptical of such efforts: "Don’t those guys at MSU know that the 'iron man' concept is vulnerable to electrical attacks, and that scientists in Ann Arbor are right now equipping Rich Rodriguez with electric whips to take advantage of just that weakness? Mark is in grave danger." said Maciek. "That’s why we abandoned the arc reactor approach in our prototype, the CVR-1. Coach Parker told us it just didn’t have enough safety protection, so we went in a more conservative direction with the CVR-2." Iowa engineers also considered adding artificial intelligence to the suit, but ran into resistance from the coach himself. Said Maciek: "I told him I could add a heads-up display that would inform him when in the game was the optimal time to blitz, when to go man-to-man, etc., but Norm told me to go … well, he told me he wasn’t interested."

Author’s note: This story may seem similar to this Onion story of many years ago, but there is one crucial difference: The Onion story was a fictitious, "joke" story.