Whatever Happened To Improving Over The Course Of A Season?

Share All sharing options for: Whatever Happened To Improving Over The Course Of A Season?

For as long as Kirk Ferentz has been at Iowa, the story has always been that Iowa is a program that improves as the season progresses; that the team that takes the field in November is appreciably better than the team that takes the field in September.  It's a logical approach to take and perfectly in keeping with Iowa's developmental program ethos.  And for a while, it seemed to be absolutely true: Iowa really did get better as the season went along.  But now?  It seems almost laughably false. 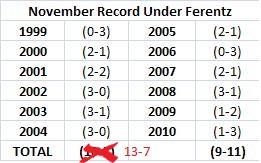 (Edited because math is hard.)

It was easy to see Iowa's improvement on the field and in the win column in the first half of Ferentz's tenure.  The 2000 team started rocky (six losses by 10+ points), but made appreciable improvement over the course of the season and finally broke through with the infamous OT win over Penn State and impressive upset of a ranked Northwestern team.  The 2001 team opened November with a heart-breaking loss before reeling off two consecutive blowouts of Minnesota and Northwestern (yes, back in those days Iowa could not only beat Northwestern and Minnesota, they could annihilate them, 59-16 and 42-24, respectively) before incurring a loss in a turnover-filled heartbreaker to Iowa State.

The 2002 team was simply a machine by the time November rolled around; Wisconsin, Northwestern, and Minnesota didn't really come close to slowing them down.  They were a long way away from the team that had endured a nailbiter with Miami (OH) and an excruciating come-from-ahead loss against Iowa State.  The 2003 team rattled off three wins in November despite being effectively out of the Big Ten title race after losing to Ohio State in October.  They thrashed the only actual good Minnesota team of the Aughts (no, really, they went 10-3 that year, srsly) and proved their close game mettle by knocking off Wisco in Madison.  The 2004 team didn't win pretty in November -- see: back-to-back hold-on-for-dear-life games against Purdue and Minnesota -- but they were still a step up from the team that got blown out in Tempe two months earlier or lost in Ann Arbor.

The 2005 team seems like a crossroads team, in hindsight.  They had the gagged-away close games (Michigan, Northwestern) that have been a staple of the last half-decade of Iowa football (2009 aside), plus the ability to rebound and trounce teams that some of their predecessors had displayed (Minnesota, Wisconsin).  By 2006, all of that ability had vanished and Iowa just lost games... and then lost some more.  November 2006 opened with the infamous "fat cats" game against Northwestern and closed with a lackluster capitulation to a mediocre Minnesota outfit (sound familiar?).  To be fair, the '06 team did display some ability to improve by coming out and looking like hell on wheels in the first half of the Alamo Bowl against Texas, but by then it was too little too late to salvage a once-promising season (Iowa's home game against Ohio State wasn't the first night game in Kinnick in almost twenty years just because ABC wanted to give the nation an early look at a national title-contending Buckeye team).

Of course, it's a source of perverse irony that one of the few Iowa teams in the last half-decade to seemingly show signs of improvement in November was also one of the worst Iowa teams of the last half-decade, the hapless 2007 squad.  But after getting their asses handed to them by OMHR and dropping to 3-5, they rattled off three consecutive wins, including Iowa's lone win over Northwestern since 2002 and a way-too-close win over a dreadful 1-11 Minnesota team... before, of course, laying the turd of all late-November turds against a sub-par Western Michigan team.  So maybe the November "progress" that year was simply a mirage: they had a winning record, but it came against a 6-6 jNW squad and a 1-11 Minnesota team and they looked as bad as ever in losing that WMU game.  The Iowa teams that were honestly good in November -- the teams from 2001-2005 or so -- never would have lost that game.  Hell, the 2000 Iowa team might have won that game.

The 2008 team was the only Iowa team in the last half-decade that genuinely seems to have improved from September to November.  After their fourth close loss of the year in a month-opening loss to Illinois, they responded with the program-defining upset of Penn State, a ho-hum win over Purdue, and the beloved Metrodome Massacre game.  That was a team that had things figured out.  The 2009 team stumbled to a 1-2 record in November after a racing out to a 9-0 start, and while injuries are the common excuse trotted out, that team was playing with fire by the time November rolled around.  They'd had to turn around deficits in four straight games before the bottom dropped out in the WOOTENOCALYPSE game; injuries or not, they were not a team firing on all cylinders.  And 2010... well, we just lived that weekly horror show and it was pretty clear that the Iowa team that suited up in November was a shell of the one that showed up in September.

So... what the hell happened?

Raise your hand if you think Iowa simply had better talent in 1999-2004 and that's why Iowa had better records then.  To be sure, there were some undeniably special talents that suited up for Iowa in those years -- Brad Banks, Bob Sanders, Dallas Clark, the Iowa offensive line of 2002 (and especially Robert Gallery), Chad Greenway and Abdul Hodge, to name a few -- but talent alone doesn't explain the drop-off.  (And if you do think that talent is the all-encompassing explanation, we need to have a separate conversation about why Iowa is no longer able to recruit or develop better talent, because that would be a gigantic problem in itself.)

Injuries would be a popular explanation for many of  the disappointing Novembers, like 2009 (in addition to the obvious Stanzi injury, we also lost Dace for the year prior to November and dealt with injuries to key starters like Wegher and Greenwood) and 2006 (Tate had ongoing injury drama that year, Brodell and Young got hurt, Moeaki was probably hurt, and I believe that was the year Klink was running around with a club on his hand).  But there were injuries in many of the seasons with good November records -- the 2004 team dealt with the MASH unit at running back and the 2003 team had to deal with multiple injuries in the receiving corps and the loss of Bob Sanders for a few games.

Bad luck?  An unfortunate bounce of the ball on a perfect onside kick by Northwestern may help explain their win in 2005, but that sort of misfortune can't explain away all the troubles.  It certainly doesn't explain why ostensibly more talented Iowa teams have routinely spit the bit against less-talented foes since 2005.  So what is it?  Is it a problem of motivation?  Is it a problem of execution?  Is it a problem of other teams scheming against Iowa more effectively?  The motivation issue lingers in the air like a stale fart after the disastrous collapses of 2006 (and now 2010).  Did those teams simply check out after their initial goals (national title, conference championship) were frittered away?  That's a common armchair psychologist explanation, but that seems a little too pat.  After all, the Iowa team of 2006 gave rousing efforts against Michigan and Wisconsin (two teams that went a combined 22-2 in the regular season that year)... and then turned around and pissed all over themselves against Indiana and Northwestern.  Likewise, the 2010 Iowa team took Wisconsin and Ohio State to the wire... but were also taken to the wire themselves by Indiana, Northwestern, and Minnesota.  EA Sports now gives you the opportunity to level out the talent between teams in the NCAA FOOTBALL video games but, um, that's not real.  Do other teams simply figure Iowa out by November now?  There's some support for that when Dan Persa says that Northwestern knew exactly what Iowa was going to run, but that still doesn't seem like a total explanation.

At the end of the day (or this stupidly long post), I don't have any answers.  I wish I did.  But until the coaches and players figure out how to regain that November magic, we're going to be staring down the barrel of a lot more 7-5 (or worse) seasons, unless Iowa can once again harness the wild luck that led them to a 9-0 start in 2009.  It's cliche to say that it's better to lose early than it is to lose late, but that doesn't mean there's not some truth there anyway.  So long as you don't bottom out in September, a loss in September generally only costs you a shot at a national championship (which is costly, to be sure, but also not a realistic aspiration for most teams).  Losses in November gut your ability to win conference championships and head to the best bowls.

Since 2001, nineteen teams have won a share of the conference title and/or gone to a BCS bowl; those teams have an aggregate record of 52-7 in November games and only one of them (that weird and wonderful 2009 Iowa squad) lost more than one game.  You want to know one big reason why Ohio State has had at least a share of the last six Big Ten titles and why they've been to six straight BCS games (assuming they're picked for another one this year which, c'mon)?  Since 2005, the Sweatervest is 17-1 in November.  That's winning when it counts.  When Iowa was humming in the early Aughts and contending for conference title hardware, Ferentz did the same: Iowa went 9-1 in November games from 2002-2004.  To get back to those lofty heights again, Ferentz & Co. need to turn around their sagging fortunes in November and figure out what's gone wrong -- whatever they're doing now isn't working.