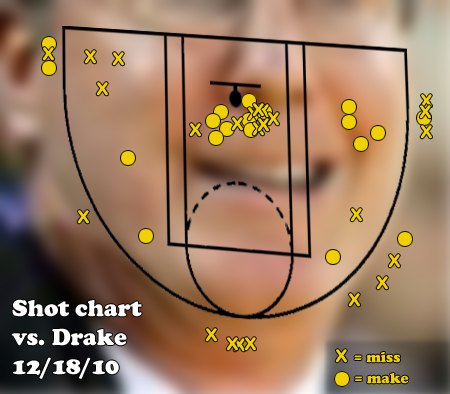 The Hawks came out strong against Drake, running out to a 14-0 lead in the first six minutes.  They then proceeded to play some appallingly ugly offense, scoring 14 points over the next 18 minutes and making only one field goal in the final 10 minutes of the first half (that being a buzzer beater by Bryce Cartwright).  The defense was solid throughout the game, although periodically the Hawks forgot the Scott Christopherson "don't leave the white sharpshooter open" lesson and allowed sophomore Ryan Wedel to get off several uncontested threes.  McCaffery switched Matt Gatens onto Wedel down the stretch, and Gatens did a good job of hounding him on the perimeter.

Iowa needed their defense last night, because the offense was anemic (and that may be an insult to anemia).  The Hawks had 18 turnovers in a fairly slow-paced game, many of them unforced travels, carries and offensive fouls (not to mention four or so missed dunks).  One observation I would make after 11 games is that the Hawks have many competent offensive finishers on the team, but few creators.  Gatens was critical in this regard against Drake, providing at least some shooting and ball-handling when the rest of the team was ice-cold.

Perhaps to deal with the team's lack of offensive spark, Fran McCaffery chose to play Devyn Marble down the stretch rather than Cartwright, and the decision seemed to pay off, as Marble ran the offense successfully, made a critical tough jumper (it's the mid-range one on Fran's right cheek), and got a steal to help ice the game.  Iowa finally got some semblance of offense going in the last five minutes, and recorded several lay-ups and dunks (Melsahn Basabe abused his Drake defender on one baseline dunk, making me wonder why he hadn't been doing that all game).  It was an ugly game, and the offense is something to worry about, but a win's a win.

* The refereeing was ... odd.  Not particularly biased against Iowa, but very tight.  There were several carrying and travel calls that left Iowa fans scratching their heads.

* After a defensive mistake in the second half, Fran went supernova on the sideline, ripping into the entire team for a good minute or two.

* I was in Des Moines visiting family and actually got to see the game live.  I had never been to the Knapp Center before, and noticed a few interesting things: