The Hawk and the Snowman: Iowa player found to be made entirely of cocaine

Share All sharing options for: The Hawk and the Snowman: Iowa player found to be made entirely of cocaine 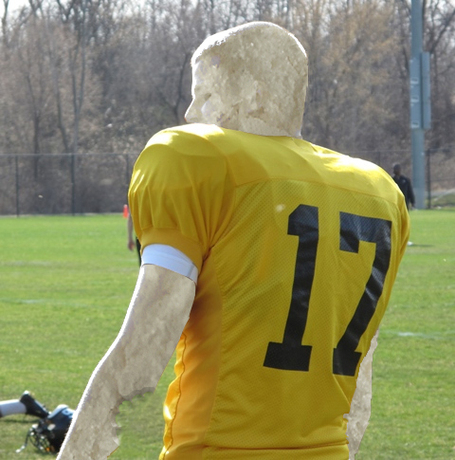 In a shocking development, University of Iowa football coach Kirk Ferentz revealed today that one of the team’s players is composed entirely of cocaine.  The player, sophomore kicker Anthony Wyoming, has been suspended indefinitely and will not travel with the team to the Insight Bowl.  "We were alerted by anonymous sources that there might be a problem with Anthony, and after extensive drug testing we determined that he was not, in fact, a football player, but actually just a six foot-tall figurine made of, um, pure Colombian cocaine.  I’m disappointed, obviously, but we’ll move on from here."  When asked how the coaching staff could have missed the existence of a gigantic cocaine-man in the locker-room, Ferentz responded, "Well, he seemed to be doing fine in practice -- no worse than any of our other kickers -- so there weren’t any obvious red flags, but it does appear that we need to tweak, so to speak--to inject a little levity here--our testing procedures to account for this sort of thing.  It appears that certain players -- and it may have been one or twenty-one, we don’t know -- may have found a way to get around our procedures and, um, use Anthony as a human salt-lick."  Ferentz specified that the coaching staff will, from now on, keep a vigilant look out for players who are extremely white and pasty.  The team initially planned to suspend both Wyoming and sophomore Nick Nielsen, until it was determined that Nielsen was merely of Scandinavian extraction.  Wyoming, whose street value is estimated at $1.7 million, is in police custody.

[EDIT: By the way, it went with little fanfare as these things usually do, but please join us in formally welcoming Horace E. Cow to the writing staff at BHGP.  We're happy he's on board, because it was a pain in the ass to bump everything he wrote in Fanposts to the front page.]