Ken O'Keefe Gets the Call

Share All sharing options for: Ken O'Keefe Gets the Call

I can't believe they still fall for your "I don't use the Twitter" shtick.

I know, me either.

I'd better go talk to Ken.

About the DJK and Robinson suspensions.

What?  He doesn't know about those yet?

LOL.  Actually, he's spent the week trying to get Stanzi to fight a tiger.

How's he going to take the news that his two best players are out?

Probably not too well.

I can think of one way to soften the blow...

Aw, what the hell.  I have some free time.  Crack a couple of cold ones.

The video is awesome, Ken, but I don't see how it's relevant.

This worked wonders for Drew Tate in 2004.  If you really want to win, you need to fight the other team's mascot.

No, Ken.  For the last time, I'm not fighting a tiger.

What about if I get Tiger Woo-

Hello, this is Ken.

You can come to Pittsburgh and interview for our vacant head coaching position, Ken.

Absolutely.  You're exactly what we're after.  You have head coaching experience, right?  Allegheny College or something like that?

And you've successfully recruited a number of players with average talent from Pennsylvania and Ohio.  Don't forget about that.

We've been especially impressed with your ability to take above-average skill position talent and work that into an offense that scores 17 points a game and finishes in the bottom half of the Big Ten in every meaningful statistic.  We usually hire guys who do that on defense, but this is a big step for us.  You're the total package.

Oh, and I almost forgot how much we love the way you put that Chaney kid in at wideout every time you're going to run an end around, just so the other team can know it's coming.  That's great.  We love that.

I like to think I have a certain flair for the anticlimactic.

So what we need you to do is this: Grab your playbook and drive to Cedar Rapids.  When you get there, go to the United counter and request the ticket reserved for "Keefe O'Ken."  We're going to try to keep this under wraps.  We don't want anyone else hearing about this and giving you a...HAHAHAHAHAHA

Aw, gosh darn it.  You really got my hopes up, Kirk.

It was Barta's idea, I swear.

Anyway, I've got some news: Koulianos and Robinson are suspended for the bowl game.

Yeah, apparently Derrell was living with the Tony Montana of the Midwest, and ARob didn't show up for finger painting class last week or something.  Violation of team rules, conduct detrimental, all that shit.

You can't do this to me, Kirk!

What's that supposed to mean?

I'm just kidding.  McNutt's not getting suspended.  I just told Rob Howe that to see if he'd publish it and then blame his mistake on the social networks and radio hosts.

Anyway, this should make it easier for you to follow the rules.  You remember the rules, don't you?

Yes, I remember the rules.

Tell them to me.

TELL THEM TO ME NOW.

Good.  Now go get me two touchdowns and a field goal.  I know you can do it.

I'm so sick of Kirk and his rules.  I'll never get that head coaching job.  He's always keeping me down.

He thinks he can take away my best players and make me look bad?  I'll show him. 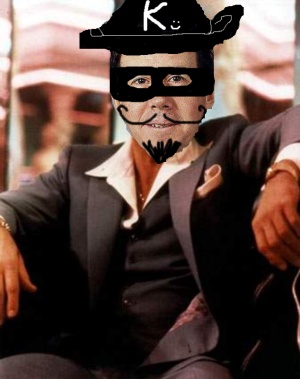