Share All sharing options for: A Winner Is You! 2010 Iowa Wrestling Preview: 165 lbs. (plus bonus BTN coverage/Media Day news!) 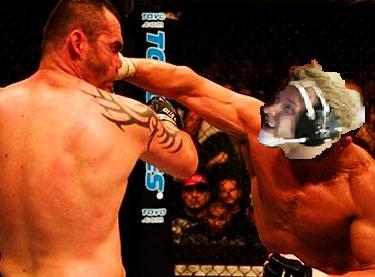 OK, aside from a receding hairline, Aaron Janssen has little in common with Randy Couture.  He still might be able to beat Tim Sylvia, though.

The Known Quantity
In hindsight, we probably should have gotten to this weight a little sooner in the rundown, given that the guy who's almost certainly going to be starting is not new to fans of Iowa wrestling -- it's our old friend Aaron Janssen, who's been hanging around the line-up pretty steadily for the last three years.  Of course, the main reason we didn't talk about this weight any sooner was that up until semi-recently, we thought the 2010 version of 165 lbs. was going to be a reprise of the 2009 version of 157 lbs. -- a back-and-forth battle for supremacy between Janssen and Jake Kerr.  And then Kerr went and moved up to 174 and that pretty much scotched that idea.  So we're left with Janssen at 165, taking over for the departed Ryan Morningstar, who was one of the guttiest wrestlers on the Iowa team (he fought through a bad knee injury at last year's NCAA Tournament) as well as one of the most frustrating wrestlers to watch ("SHOOT, RYAN, SHOOT!" still echoes through my head).  Janssen wrestled all of one match at 165 a year ago (a 10-2 loss to Andy Rendos of Bucknell) before moving down to 157 and assembling a 12-3 record there while sharing time with Kerr.

In fact, while Janssen wasn't spectacular at 157, he also wasn't terrible by any stretch and some folks were surprised that he wasn't the guy tabbed to compete in the NCAA Tournament.  So it goes.  Prior to last year, Janssen had spent most of his time at 165; he went 11-5 overall while wrestling mostly unattached in 2008-2009, and 6-5 in 2007-2008, including an 0-4 mark in duals while filling in for Mark Perry.  Given that it's been basically two years since Janssen competed at 165, it's hard to know how he'll fare there this year.  He wasn't particularly great 2-3 years ago, but that doesn't necessarily mean a lot -- guys do improve.  That said, based on his track record over the course of his Iowa career, the safest bet seems to be that he'll be solid, but probably not blow-away great -- there's simply nothing in his track record to suggest that's very likely.

The Possible Options
As noted earlier, until semi-recently, Jake Kerr was the other main option at this weight -- then he went and moved up to 174, which simplified things here quite a bit.  The depth chart beyond Janssen is, frankly, pretty slight.  There's redshirt freshamn Joe DuCharme, and a trio of true freshmen (Nick Moore, Mike Kelly, and Walt Gilmore) -- and that's it.  Presumably, if something happened to Janssen and he was going to miss a lot of time, Kerr might drop back down to 165 to mind the store.  DuCharme went 4-2 while wrestling unattached last year, which doesn't quite suggest that he's ready for primetime.  As stated in the 157 preview, Nick Moore was a highly-decorated and hugely touted prep wrestler (out of local powerhouse, Iowa City West), so it's a safe bet that he'll find a spot in the line-up after his redshirt year.  Kelly wasn't a slouch, either (two-time Iowa state champion), but he seems to be behind Moore for now.  In any event, as we've stated ad nausem, Brands is a big, big fan of reshirts; don't expect to see any of these freshmen until at least next year.

The Potholes In The Road
Five of last year's All-Americans are gone and two of the three returning All-Americans (Oklahoma's Tyler Caldwell and Stanford's Nick Amuchastegui) are apparently moving up to 174 lbs.  That said, last year's national champion (Wisconsin's Andrew Howe) is back and the 2009 national champion at 157 lbs. (Jordan Burroughs) has moved up to this weight after redshirting last year while injured.  There's also a handful of other dangerous guys like Central Michigan's Mike Miller, UNI's Jarion Beets, Maryland's Josh Asper, Cornell's Justin Kerber, and Rutgers' Scott Winston.  The good news for Janssen is that outside of Howe, this isn't a terribly deep weight in the Big Ten.  Aside from the top-ranked Howe, Minnesota's Cody Yohn is pretty much the only Big Ten guy to warrant preseason consideration.

The Reasonable Expectation
To an extent, we know what to expect with Janssen -- he's been in and out of the line-up for a few years and wrestled a fair amount on the big stage, often doing a decent job, but not an exeptional one.  Then again, he's never had a concentrated run at 165 lbs., either.  Given the shallow state of this weight in the Big Ten, a top 3-4 finish doesn't seem too hard to fathom.  Attaining All-American status at the NCAA Tournament seems like a much taller task, though -- at least until we see him wrestle a little bit this year and see if he's made any sort of massive improvement.  For now, we'll settle for a few wins at the NCAA Tournament.

The Big Ten Network announced their coverage schedule for wrestling this week and the good news is that there's a solid amount of Iowa coverage; the bad news is that most of it is via live streams on bigtennetwork.com.

All the Big Ten meets (plus the ISU meet) except the Purdue meet (doesn't the Big Ten know they're OMHR?!) being made available?  Good.  The BTN's revised streaming policy?  Not so good.  Last year, you could buy events on a per-event basis for $2.99 a pop -- not a horrible deal (although the streaming quality was sometimes pretty variable).  This year, they're only offering conference and school passes on an annual and monthly basis.  Conferences passes obviously let you watch everything; the annual rate is $99.95 and the monthly rate is $12.95.  The school pass lets you watch just the events involving the school of your choice; the annual rate is $64.95 and the monthly rate is $7.95.

Get tough.  Iowa wrestling's annual media day took place yesterday and while it didn't answer the biggest mysteries of the wrestling team this season -- who's going to start (that's what Saturday's wrestle-offs and a handful of early season tournaments are for) or how they're going to do (either Tom Brands' crystal ball is broken or he's just being cagey) -- but it did serve as a nice primer for the season (and gave us that gem of a quote on the front page).

However this year's line-up shakes out, odds are that it's going to have a very heavy Iowa flavor:

As many as eight relatively untested native Iowans could dot the lineup in Tom Brands’ fifth season as Iowa’s wrestling coach — a stint that has produced three straight national titles.

"Good for Iowa," said Brands, whose teams have never featured as many as eight Iowa-born starters. "It may be a coincidence or not, but not really because we recruit the best guys in the country and when they happen to be from Iowa that’s a coincidence. … It just happens that those Iowa boys are getting tough."

Nothing against out-of-state wrestlers at all -- we're very curious to see how the Lofthouse guys do this year and our favorite wrestler of the past half-decade (at least) was an out-of-state guy (Brent Metcalf) -- but it would add an extra layer of satisfaction if Iowa could accomplish big things again this year with a largely home-grown line-up.

And what about those preseason expectations?

Yes, the Hawkeyes, winners of three straight national titles and 61 consecutive dual meets, are ranked No. 11 by one service. Their opinion on that: Who cares? That same publication and a few others didn’t even have McDonough rated in the top 20 at the start of last season.

McDonough is the consensus preseason No. 1 at 125 and Iowa’s lone wrestler rated in the top eight — one reason W.I.N. has the Hawkeyes ranked 11th as a team.

For perspective, it’s been 38 years since Iowa finished lower than eighth.

It's not often that a three-time defending champion gets to play the "no respect" card or compete with a chip on their shoulder -- but then again, it's not that often that a three-time champion is faced with replacing roughly 80% of their championship-winning line-up from the year before, either.  The ranking is what it is; as Brands said, it's really just math -- and right now the math doesn't favor Iowa:

Iowa's rolling out a line-up that's largely comprised of guys with no experience -- or very little experience.  It's difficult to know where to rank those guys in relation to the experienced guys that are returning, so it's understandable that the initial rankings for pretty much everyone but McDonough are low -- you don't get a free pass into the top ten just because you're wearing a black and gold singlet.  Still, it's worth paying attention to the note up above -- that Iowa hasn't finished lower than 8th at the NCAA Tournament in 38 years, even in the lowest depths of the Zalesky era. Between the quality of Brands & Co. and the highly routed recruiting classes (Brands' last three recruiting classes were ranked 5th, 5th, and 1st) most of these newcomers hail from, there's plenty of reasons to believe that Iowa will be able to finish higher than their projected 11th-place standing.

In the meantime, all the new faces have one very obvious and very clear template to draw from -- Matt McDonough.

He’s the template because of the example he set for the Hawkeyes last season. When Iowa coach Tom Brands spoke of McDonough last year, he talked in glowing terms about the freshman’s commitment, training habits, toughness and competitive drive.

McDonough is the template for the Hawkeyes because he’s a returning NCAA champion in a program that settles for no less. Because he was 37-1 at 125 pounds last season and most times dominant. He scored bonus points for Iowa in 28 matches.

If Iowa can have a few more guys emerge this year the way McDonough did last year, they'll be in great shape to make a run at a fourth-straight national title.  (Incidentally, Hawk Central has all kinds of video from the event, too.)