The A-Rob rumors started turning up on Hawkeye-related corners of the interwebs a few days ago, but it wasn't until this morning that we got some sort of substantive information from a source we trust, FOTP Marc Morehouse.  Says Mas Casa:

Iowa running back Adam Robinson suffered a mild concussion late in the Hawkeyes’ victory over Michigan State, according to sources. His availability for Saturday’s game at Indiana is 50-50.

AIRBHG, you sneaky bastard.  You've laid low ever since the horrorshow that was the Arizona game, when you felled Jewel Hampton and DAS PAKIBOMB.  It was probably too much to hope for you to leave the rest of Iowa's running backs alone for the duration of the season.  So if A-Rob can't go, what does that mean for the offense on Saturday?  It probably doesn't mean we have to change the threat level on the DAS PAKIBOMB Advisory System (from the same article):

It’s unclear whether senior Paki O’Meara would be an option at running back. He’s seen limited special teams action since suffering a concussion at Arizona.

It does means the offense is without a very reliable cog and a back who's third in the Big Ten in yards (804), fourth in rushing touchdowns (10), and first in carries (172).  But it doesn't mean the offensive is going to shrivel up and die.  Lest we forget, we still have Ricky Stanzi, Derrell Johnson-Koulianos, Marvin McNutt, Allen Reisner, Brad Herman, Colin Sandeman and an offensive line that's been providing exceptional pass protection for weeks now.  They're also facing an Indiana defense that ranks 105th in pass efficiency defense, that's allowed opposing quarterbacks to complete 65% of their passes, and that's given up 1700+ yards and 17 touchdowns.  They're not good.

And, frankly, it wouldn't be the first time that a true freshman has led Iowa in rushing against Indiana -- in fact, it would be the (almost) third straight year it's happened.

* -- OK, technically Shonn Greene had 115 yards in that game, but do we really want to quibble over one yard?

Furthermore, Wegher and Hampton accomplished their big days against Indiana defenses that were a bit more stout than this year's outfit (this year's Indiana team ranks 82nd against the run).  Now, granted, it would be a little unfair to expect either Marcus Coker or Brad Rogers to put up numbers like that; Coker has only 26 carries all year and missed most of fall practice, while Rogers has just nine carries all year and has been splitting time at running back and fullback.  But outside of those hapless Golden Gophers, there's no defense in the Big Ten that's been more inviting than Indiana's (well, maybe Michigan's garbage fire of a defense, too), so if ever there was a day to let the Cambus and Coked-Up Werewolf get plenty of in-game reps, Saturday could be it. 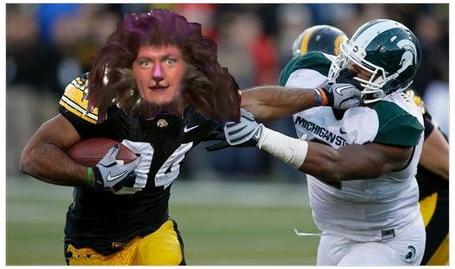 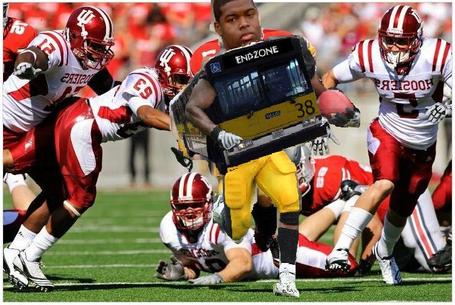