Hawkeyes Don't Listen to Your Expectations, Except for When They Do

Share All sharing options for: Hawkeyes Don't Listen to Your Expectations, Except for When They Do

In the wake of the Northwestern loss, after the Big Ten championship campaign had slammed head-first into a roadside ditch, there were questions of expectations: What expectations the coaching staff had for this team, what (if any) role external expectations had in setting team goals, and whether this season was the unmitigated disaster for the coaches and players that it seemed to be for the fans and media.

Ferentz, as usual, was dismissive:

My expectations, I wouldn't describe them as lofty. I would say they've been the same every year, almost every year....  I want to be conference champions. That's where it ends. After that, our goal is to do the best we can each week. It starts with preparing well, then playing well. That's what the goal is. It hasn't changed.

I told our players this back in January, reemphasized it in the spring, went through it in August. As the season goes on, you remind them. You can't control what other people's expectations are. Those are external thoughts. The experts aren't always right, that's pure and simple.

Of course Ferentz is right, and his team should have its own goals.  If their goal is to be Big Ten champs, and "that's where it ends," fine, I suppose.  But you can't exactly say that external expectations are irrelevant, or that the team's goals are different than those of its fans, when your own tight end coach is on Twitter talking national championship: 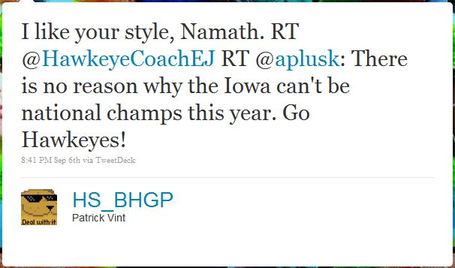 For those of you who don't speak Twitter, that's Iowa tight ends coach and recruiting coordinator Eric Johnson retweeting (or recommending) a tweet on September 6 by Ashton Kutcher saying there is no reason why Iowa can't be national champions.  This was done two days after Eastern Illinois, when that goal still seemed attainable, at least to such outsiders as a 12-year veteran of the coaching staff.  It's one thing to say external expectations aren't of particular importance, but that's not what we get -- ever -- from Ferentz.  No, we're to believe that our expectations mean nothing.  Meanwhile, his coaches and players are not just adopting those fan expectations, but openly promoting them.  Ferentz right now is the guy who owns the snake oil company, telling his employees to talk about how his tonic cures polio, then denying he ever said such things when the drug doesn't work.

This is not to criticize Eric Johnson for having the audacity to think about a higher goal this season; frankly, if Ferentz didn't look at this team and this schedule and let his mind wander, at least for a fleeting moment, to the crystal football, then I don't want him coaching my team.  I refuse to believe that is the case.  I refuse to believe that this team and this staff didn't at least contemplate an undefeated season, and I would feel better about this past weekend if they did; I barely had the heart to watch the Minnesota game, and can't begrudge this team lacking the fire I had long since lost.  After all, when your goal is the Rose Bowl, deciding between the Outback and Gator Bowls just doesn't carry the usual import.  I completely understand if this team and this staff are disappointed.  It would just be nice if, for once, we'd have a coach who didn't lie to our face solely to save himself from stating what we all know is true, from telling us he's as disappointed as we are.