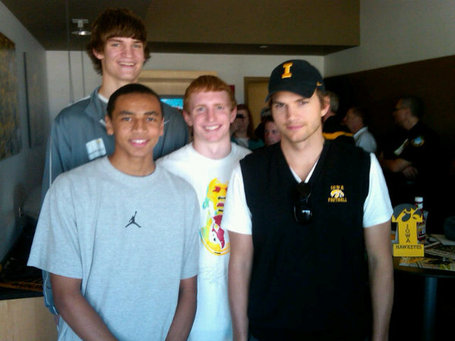 This stuff never happened when Tom Arnold was our most famous booster.

Due in part to the Michigan State game, and in part because the story just seemed too surreal even for us, we haven't commented on the Ashton Kutcher basketball recruiting story.  For the uninitiated, apparently a pair of basketball recruits from Cedar Rapids met former players Reggie Evans and Dean Oliver at a pickup game prior to the Iowa-Iowa State game in September, then took in part of the football game from a luxury box with Kutcher and Demi Moore.  One of these recruits, point guard Marcus Paige, put a picture of the event on Twitter.  This picture was retweeted by Rob Howe, because Howe needed a break from talking to all those anonymous sources.  The other recruit, now-Iowa commit Josh Oglesby, told a recruiting website about the visit, which is just another reason why we shouldn't have recruiting websites.  These two reports were more than enough to tip off investigators, who follow the recruitniks for precisely this kind of information.  Four days later, the athletic department received a letter of the NCAA notifying them that the contact between recruits and Kutcher (who once attended the U of I, is now an athletic department booster, and helps with fundraising activities) was verboten, as was the meeting with Evans and Oliver.  According to Dochterman, the NCAA initially told Iowa the players would be prohibited from playing for the Hawkeyes.  Given that Oglesby is widely considered one of the top players in the Midwest, and Paige is receiving interest from programs like (gulp) North Carolina, this could be devastating.

Yesterday, one day after the DMR's Tom Witosky breathlessly reported the story like he'd identified the second gunman on the grassy knoll, the NCAA notified the University that the violations were considered "secondary," though there hasn't been a decision on what punishment might result.  This is stupid, and this is incidental, and this is nothing more.  As Hlas so rightly put it, this type of thing happens all the time; Harrison Barnes met Vince Carter, Larry Brown, and Michael Jordan while North Carolina was courting him, and he's still eligible.  That is to say nothing of the fact that these guys weren't yet born when Indecent Proposal was released, so how relevant can Demi Moore really be?  In any case, more news on this as it is available.

Not to be outdone, the football program got in the act by picking up a secondary violation of their own, this one for web video.  Over the offseason, athletics department staff posted a video of players participating in offseason workouts.  Anyone who followed the Rodriguez offseason saga at Michigan knows that such workouts cannot be attended by coaches or personnel other than quality control staff, and they weren't.  But the NCAA determined that the video could be viewed by coaches, which is one way of getting around that whole "you can't watch workouts" problem.  Yada yada yada compliance staff must approve of future videos let's all have cake.  These things happen in college sports; a recruiting database incorrectly lists a sophomore as a junior, or a coach text messages a recruit on a visit to give directions, and before you know it you're swimming in a sea of paperwork and taking classes on compliance.