Share All sharing options for: A Winner Is You! 2010 Iowa Wrestling Preview: 141 lbs. 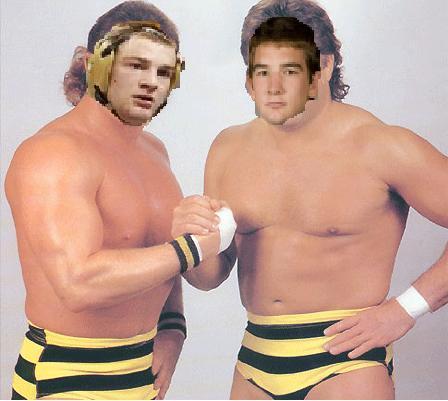 The Known Quantity
"Known quantity" -- ha.  This should have been one of the two weights that was the most locked down heading into the season (along with 125, of course), since it featured a returning starter and NCAA Tournament runner-up.  But then young Montell Marion had to go and run afoul of the law, which led to his dismissal, which put us right back to square one at this weight.  There are persistent rumors in certain corners of the Hawkeye-related interwebs that Marion could be back on the team at some nebulous point in the future, but until we hear something concrete the best policy is likely just to focus on the guys actually there.  Of course, uncertainty and confusion has been the order of the day for some time at this weight; Alex Tsirtsis and Dan LeClere battled for this spot for a few years, to frequently middling results come tournament-time.  Fifth-year senior and former NCAA Tournament runner-up (at 133) Joe Slaton was expected to take over this weight last year, but a run-in with the law derailed him and opened up a spot for Marion.  Marion seized the opportunity and put together a fine season: 32-8, with a runner-up finish at the NCAA  Tournament and a 3rd-place finish at the Big Ten Tournament.

With Marion gone, the spotlight falls on... well, someone.  Right now, the favorite to start here appears to be a member of the Ballweg clan, specifically Mark, the middle Ballweg.  Mark went 1-0 in the wrestle-offs last weekend, getting a 12-4 major decision win over freshman Ethan Owens.  A year ago, he went 11-5 while wrestling unattached, including a first-place finish at the Wisconsin Open, which included a win over Tyler Clark, the current slight favorite to start at 133 for Iowa this year.  But as with most of the fresh faces on Iowa this year, the biggest knock remains the lack of experience against top-flight competition; he simply didn't see many guys of that caliber last year, so it's hard to know what to expect if he's the starter this year.  Frankly, the most exciting thing about Ballweg starting is the fact that it opens up the possibility that Iowa could try and pull off the Killer Bees' ol' switcheroo routine in the middle of a match.  I mean, sure, we'll have to find a way to distract the ref and the rest of the crowd will have to pretend to play along with the act, but c'mon: you can't tell me this wouldn't be awesome.  And if Jake Ballweg slips some brass knuckles into his singlet, well, so much the better.

The Possible Options
Mind you, there's not much in the way of other options, either.  The official roster lists five other guys as possible options at 141, but three of them (Jacob Ballweg, Josh Dziewa, and Ethan Owens) are true freshmen and by this point you should know what the odds are of them cracking the line-up.  (Not to mention that Jacob Ballweg appears to be focusing on 149 for now.)  The two non-freshmen options are junior Tyler Halverson and redshirt freshman Nick Trizzino.  Trizzino appears to be primarily working at 133 at the moment, while Halverson simply hasn't competed much at all in his three prior years at Iowa: nothing at all last year, 1-4 the year before that, and 6-6 in his first year.  You don't often see guys go from complete non-entity to starter.

The Potholes In The Road
There's also the usual good news/bad news when it comes to the other returning faces at this weight around the country.  The good news is that the top three finishers from a year ago won't be around at this weight this year, although for three different reasons (Ohio State's Reece Humphrey has graduated, Montell Marion was dismissed from the Iowa team, and Cornell's Kyle Dake has moved up to 149).  The bad news is that the other five All-Americans are back and they're expected to be joined by two elite talents coming off redshirt years -- Illinois' Jimmy Kennedy and Michigan's Kellen Russell.  The other top returning guys figure to be Oklahoma's Zack Bailey, Pitt's Tyler Nauman, Minnesota's Mike Thorn, and Ohio's Germane Lindsey -- all of whom were All-Americans last year.

The Reasonable Expectations
The expectations for this weight are not high, frankly.  Between the fact that this is a fairly loaded weight in terms of returning contenders (both at the national and Big Ten levels) and the fact that Ballweg is such an unknown, it's hard to have a ton of faith in this weight having success this year.  Not to mention the fact that this weight feels slightly cursed; Marion was able to bust out and have an excellent season a year ago, but prior to that it's been the source of underachieveing results for a few years.  All of which is to say that if we see better than a top-five finish in the Big Ten and an NCAA Tournament qualifier out of this weight, then we're doing better than expected here.  Fingers crossed.

Meanwhile, the season gets underway officially tonight (good timing: we has it), with a pair of meets in the Iowa City Duals.  Iowa takes on Iowa Central at 4pm and Coe College at 6pm.  Last year, Iowa went 5-0 at the Iowa City Duals and the smallest margin of victory was 39-3 (the others were 57-0, 52-0, 51-0, and 47-0).  This year's team obviously isn't as loaded as last year's killer squad, but they should still have little difficulty extending their school-record dual meet winning streak (61 and counting).