Share All sharing options for: The Return of Wizgerald

Note:  If you have not yet read this post from last year, then you really need to.  Otherwise this will make far less sense than it already does.

On a day that seems like any other, Patrick Tonsilcock Fitzgerald wakes up to chirping birds and a gentle ray of sunshine across his face.  He jumps out of bed, puts on his Dora the Explorer slippers and opens his bedroom window.  As the warm breeze hits his face, he knows it's going to be a tremendous day!

WHY THE FUCK ARE YOU STILL HERE?

That's better.  Man what a great day.  It's really super to be alive.  Let's see what's on the agenda today. 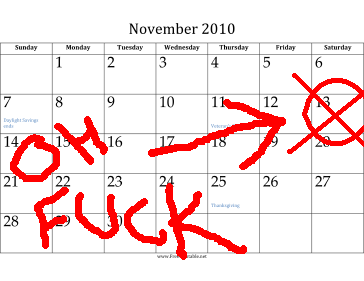 HOLY POPE SHIT!  WE PLAY IOWA ON SATURDAY!  I HAVEN'T EVEN CONCOCTED AN EVIL PLAN YET!  TIME FOR SOME CRAZY-ASS MAGIC.  WHERE'S THAT SONOFABITCHING GALDALF COSTUME OF MINE?

You let me wear it in that parade last month, remember?  God that was fun.  I think I left it at the Red Stallion.  Do you remember if I was wearing it when we came home?

OH FOR FUCK'S SAKE, DON'T YOU GUYS KNOW YOU'RE SUPPOSED TO BE GONE BY THE TIME I WAKE UP?

/takes $20 bill and skips away

THAT DAMN LADYMAN LOST MY MAGIC WAND!  HOW THE HELL AM I SUPPOSED TO DO EVIL MAGIC?

Oooooh, you are such a big evil man.

So the hatless, beardless, wandless, but still very evil Wizgerald set out to find the Potato.  After stopping to talk to a rough trick named Bruce, he learned that the Potato had been living at the landfill for the last year, which was perfect because all those evil thoughts had made him hungry.

When he arrived at the dump, he searched for the great majestic potato wonder that he had created.  He had looked everywhere and was just about to give up when he finally spotted his old friend.  It had been a rough year for the potato. 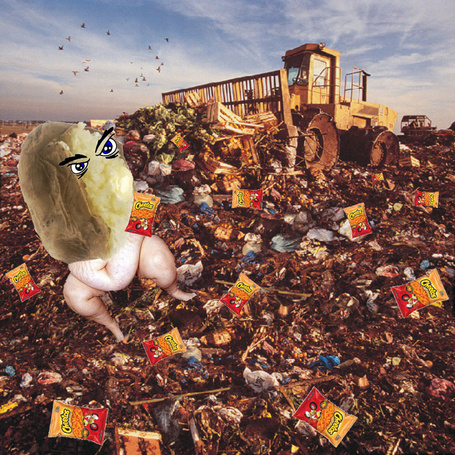 POTATO!  It's really really you.  I've missed you so much.  Come on, there isn't much time.  We've got so much to do.

Sorry, I didn't mean that.

WHAT DO YOU MEAN, "NO," YOU FILTHY SPUDFUCK?

OH, I'M AN ASSHOLE AM I?  YOU KNOW WHAT HAPPENED TO THE LAST LUNCHFOOD THAT CALLED ME AN ASSHOLE?

WRONG, FUCKER!  I SODOMIZED IT RIGHT THERE IN THE CAFETERIA.  YOU HEAR ME?  AND I MADE MY APPLE JUICE WATCH.   IS THAT WHAT YOU WANT?

The Evil Wizgerald, though still without his hat and wand, summoned the last little bit of magic he could muster...... 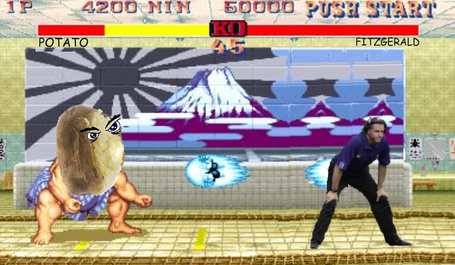 The downtrodden Wizgerald knew that he had really fucked himself good on this one.  The potato was his only chance for a victory against Iowa.  Sadness overcame Wizgerald.  He turned and took one last glance at his once powerful ally.

Though stricken with grief, he was still a little hungry.  Luckily, as he was leaving he found a turkey sandwich underneath a used diaphragm.  But not even that could cheer him up.  He walked home sluggishly.......weeping gently while slowly chewing on his sandwich.