Herky The Hawk Bleeds Black And Gold... And Red, White, And Blue, Too

Share All sharing options for: Herky The Hawk Bleeds Black And Gold... And Red, White, And Blue, Too

(Yes, this came up earlier, but it was awesome enough to deserve some more attention.  Deal with it.)

It's pretty clear by now that Iowa is the real "America's team" (Cowboys be damned) and good luck finding a more patriotic college squad (OK, aside from the service academies and probably that pesky American University). If there was any doubt about the patriotic bona fides of the Iowa Hawkeyes -- and there really shouldn't have been, what with Ricky Stanzi's overt patriotism and that famous senior poster -- our beloved mascot, Herky the Hawkeye put that to rest with his choice in Halloween apparel yesterday: 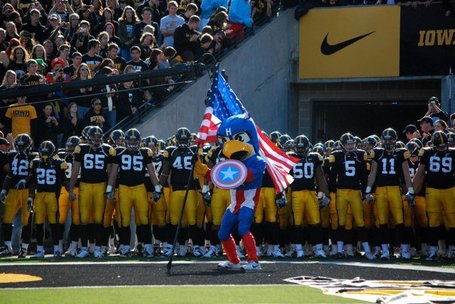 "I thought it was awesome," Stanzi said. "It was very cool."

But you know who's not impressed -- the Capital One Mascot Challenge people, who have once again omitted Herky from their annual mascot praisefest.  They found room to include such mascot luminaries as Goldy Gopher, Brutus Buckeye, Paydirt Pete, and (most damningly) Big Red, the amorphous red blob from Western Kentucky.  You know what else was big, red, and wanted to consume everything in its path?  Communism.  So we're on to you, Kapital One -- you go ahead and crown some anti-American communist handpuppet the best mascot in the land. We'll be over here watching the realest American hero mascot do his thing.