The piano riff definitely sounds like 'blung.' I took piano lessons so I know.

First off, congratulations. Well done. You all stepped it up in the face of adversity. I like that. It shows character. However, there is the homerism question. Did you all just pick Iowa because you love Iowa or did you pick Iowa because you knew that the Hawkeye defense would smother PSU to the tune of 3 points and would cover 7 with ease? Don't lie to me. I know the difference. Either way, we're looking alright:

Since I'm not really sure if you know what you're doing or are just lucky as balls, I've decided to start a couple new features that I like to call, "Name and Shame" and "Hawkstradamus."

I actually went back and perused the comments to hold you motherfuckers accountable. Not "for real" accountable or anything. I just like to keep track of the smart people. After the jump you get to see who seemed to know what they were talking about last week and who seemed like that didn't know shit. Stick around to see who's who. First, the grid: 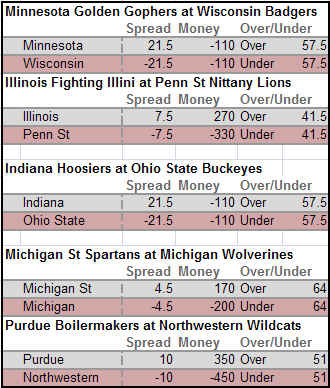 Now the awards....let's see who was wearing failpants. Name and shame comment of the week:

(I hope you don't take this personally....I'm just bustin' balls, yo)

The winner was a lot harder to pick, because the commenters were really on their game last week. Here's a few:

The Hawkstradamus award this week, though, goes to the Ross. He pretty much nailed the Michigan - Indiana score in this sexy little comment:

So, get into the comments this week and show us what you know. Use the word 'guarantee' as often as possible....