Share All sharing options for: A Winner Is You! 2010 Iowa Wrestling Preview: 157 lbs. 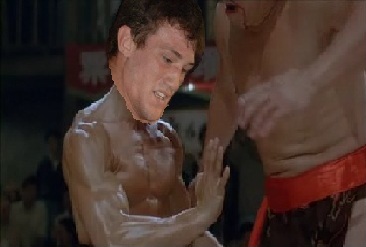 We don't think St. John participated in any underground fighting tournaments this summer, but you never know.

The Known Quantity
Actually, that title is a bit of a misnomer when it comes to this weight; Derek St. John is, by all indications, the chosen option here... but he's a redshirt freshman, so his experience against real competition is pretty damn limited.  So while he's the guy here, he's pretty far from being "known."  Mind you, that's not to suggest that St. John isn't good -- there's a reason people were clamoring for him to make his debut last year, even though Iowa had an utterly loaded team that was expected to (and largley did) roll to a third-straight national title, and it wasn't just because of the uncertainty at 157.  DSJ was a top recruit, a two-time state champion out of Iowa City West that racked up awards and decorations at the prep level.  He didn't do too bad while wrestling unattached last year, either, going 26-4, winning titles at the Wisconsin and Grand View Opens, placing third at the Harold Nichols and Kaufman-Brand Opens, and finishing 5th at the Midlands Championships.  He didn't just beat up on lesser lights, either; his wins included dominant victories over Purdue's Colton Salazar and Maryland's Kyle John, two top 20 guys at the weight.  He did struggle against the only top-5 guy he faced (lost to American's Steve Fittery, 10-0), so there's improvement to be made, but he's already off to a pretty solid start.

The Possible Options
Hoo boy.  The official roster lists no less than ten other guys at 157.  Many of those guys are double-listed at other weights, so it's no guarantee that 157 is where they'll be, but still: there are a metric shitload of guys floating around this weight.  Mind you, the fact that they're behind DSJ means that they're virtually guaranteed not to see action at this weight unless DSJ suffers an injury or goes through a disastrous run of form; he really is probably good enough to lock up this weight for as long as he can maintain the weight (which is no guarantee beyond this year).

The two main options at this weight a year ago are still there (Jake Kerr and Aaron Janssen), but both are projected to move up at least one weight class this year (and Kerr is even reported to be jumping up two weights to 174), so there's probably not much reason to discuss them here.  Sophomore Jeret Chiri's listed at 157, but he's also listed at 149 and it sounds like there's a better shot of him seeing time there.  There's also a trio of upperclassmen who saw limited action last year even in unattached competitions (Stew Gillmor, Ethan Sebert, Brooks Kopsa).  Gillmor went 4-6, Sebert went 2-4, and Kopsa didn't compete at all (but did go 2-2 the year prior).  Guys like that are good for the training room, but we probably aren't going to see them suiting up in duals unless AIRBHG turns his malevolent eye to the wrestling team.

No, the most likely option to step in for DSJ is senior Matt Ballweg, a member of the prolific Ballweg clan (there are three of them on the roster this year) .  Of course, we've been down that road before -- Ballweg filled in at 157 two years ago, to middling results (13-19 overall, 9-15 in dual competition, 1-7 in Big Ten duals), though he did a bit better last year (9-4).  If Ballweg does wind up being the man at this weight, hopefully the additional experience he's gained since 08-09 enables him to achieve some better results than what we saw then.  The other intriguing thing about this weight is the presence of three highly decorated recruits among the ranks of the incoming freshmen -- Michael Kelly, Anthony Baldosaro, and Nick Moore.  Kelly and Baldosaro were both two-time state champions, while Nick Moore was a four-time state champion who put together a freakish record of 183-1 as a prep.  They almost certainly won't get into the mix at 157 this year, but when/if DSJ moves up a weight in the future, they'll definitely be vying for that spot, which should produce some good battles.

The Potholes In The Road
Four of last year's top eight finishers at the NCAA Tournament are gone, including the champion (Harvard's J.P. O'Connor) and runner-up (Cal-Poly's Chase Pami).  Unfortunately, that doesn't mean the division is devoid of talent.  The other four All-Americans from last year (Boise State's Adam Hall, Binghamton's Justin Lister, American's Steve Fittery, and Northern Colorado's Justin Gaethje) are back and they are expected to do well.  There's also a host of guys either moving down from 165 (notably, Ohio State's Colt Sponseller and Indiana's Paul Young) or coming off redshirt years (Northwestern's Jason Welch, runner-up at 157 at the 2009 Big Ten Championships; Minnesota's Jake Deitchler, a recent Olympian; and Arizona State's Bubba Jenkins, best known for being Brent Metcalf's favorite whipping boy when he was at Penn State).  And that doesn't even mention Penn State's David Taylor, a redshirt freshman who was the top overall recruit in 2009.  So, yeah, there's some pretty good talent at this weight and between Sponseller, Young, Taylor, Deitchler, and Welsh, even securing a top-four finish at the Big Ten Championship could be a tall order.  We'll find out quickly if DSJ is as good as we think/hope he is.

The Reasonable Expectation
There are a few different ways to look at expectations this year.  On one hand, DSJ is arguably the most celebrated recruit to crack the Iowa line-up since guys like Metcalf, Slaton, and Borschel debuted in 2007.  As you might recall, two of those guys made it to the NCAA finals and the other finished third -- pretty high standards.  On the other hand, 157 has been a troublesome weight for a few years now.  Neither Kerr nor Janssen exactly distinguished themselves last year; Kerr went 14-11 overall and 2-2 in the NCAA Tournament, while Janssen went 12-4, but had mixed results against top-level competition.  As noted earlier, Ballweg was the main option in '08-'09 and he really struggled (9-15 in duals, including 1-7 in Big Ten duals); Iowa didn't even send anyone to the NCAA Tournament at this weight that year.  The enigmatic Ryan Morningstar was the main option at 157 in '06-'07 and '07-'08 and he also had so-so results (26-13 in '06-'07, 5th at Big Tens, 1-2 NCAAs; 22-14 in '07-'08, 7th at Big Tens; 2-2 at NCAAs).

Suffice to say, it's been a while since Iowa had a major threat at 157 and by those standards, even just picking up 3-4 wins at the NCAA Tournament would represent an improvement on the results we've had at this weight in recent years.  Still, even with DSJ's relative inexperience and the sizable obstacles that face him at this weight, we don't think it's unreasonable to expect a little bit more than that from DSJ.  Iowa's developed a pretty strong tradition (both recently and stretching back to the Gable days) of turning talented youngsters into medal-winners by year's end and DSJ seems like as good a bet as any to follow that path this year.  An All-America finish (top-eight) at the NCAA Tournament and a top-3 finish at the Big Ten Tournament seem within reach for DSJ this year -- and we won't be totally gobsmacked if achieves more than that, too.