Share All sharing options for: INPIYL2I is Ridin' Dirty 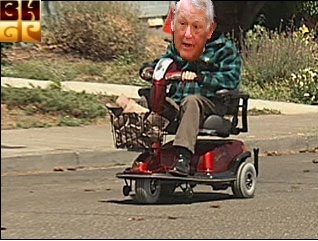 You see me rollin'.  The rumors had been floating around for a few weeks, but Kirk Ferentz went ahead and confirmed them Wednesday, revealing that Norm Parker did indeed have a foot amputated due to complications from his ongoing battle with diabetes.  In the short term, that's obviously pretty damn scary (losing part of a limb is rarely, you know, a good thing), but it may be the best for Norm's long-term health:

Parker missed time during the 2004 season because of health reasons, and had previously had toes amputated. Ferentz said there has been no talk of retirement.

"He’s gone through pretty extensive examinations and checks since he was hospitalized," Ferentz said. "Long story short, they decided the amputation was the best route to go.

"He’s still under doctor’s care, and most importantly is rehabbing."

Much as we'd love to have Norm's expertise back in the coaching booth, we'd much rather just see him get healthy. So take your time, Norm, and get well.  We'd rather not be writing any more updates about your precarious health.

Weghergate, Chapter 42.  Ferentz also took the time to update the Brandon Wegher situation and -- SURPRISE! -- there is no news:

"If he comes back, we’ll let you know," Ferentz said. "But we’re coaching the guys we have. Our focus is on our roster.

"As far as I know, he’s gone for at least this season and, for all I know, maybe forever. That’s something he’ll decide and work through [and] we’ll discuss if it’s ever appropriate, but for right now, we’re coaching the guys who are here."

In other words, Jason White probably doesn't have to worry about giving up that #3 jersey anytime soon.  The odds of any sort of substantive Wegher news coming out before January are pretty slim at this point.

Brother, can you spare a running back?  In the meantime, Ferentz has finally admitted that with the ongoing war with AIRBHG showing no sign of abating, all we can do is load up on bodies to throw into the fire:

Iowa already has secured a commitment from one running back. The Hawkeyes snagged Wisconsin prep Melvin Gordon, but coach Kirk Ferentz said Iowa will sign "at least two" running backs in February.

"I think we have to or we’d be totally foolish," Ferentz said last week.

"But right now we’re in a mode where it’s next man in, and that’s what we’re doing. I think this year, (like in) ’04, it seems like almost every year now is an illustration where we better load up on backs.

"I thought we were close, and then the rug got pulled out. We may recruit eight backs if we get the chance this year. I don’t think we can get eight to come here. Some schools can do that, but we can’t. Literally, we better not assume anything right now."

In other caring is creepy news, the above-linked article (and this one from ESPN) discuss the frankly ri-damn-diculous year that Iowa QB recruit Jake Rudock is having:

For the season, Rudock is 46-of-67 passing for 979 yards with 10 touchdowns and no interceptions. Plug those numbers into the formula for a college pass efficiency rating and it comes out to 240.65.

And he's not doing this against low-level competition, either -- his school, St. Thomas Aquinas, plays in the top level of Florida HS football and last Friday, against Camden County (Ga), the 6th-ranked team in the country, Rudock went 15/20 for 333 yards and four touchdowns.  Absurd.