Share All sharing options for: INPIYL2I Jumps Through Hoops

It's Not Plagiarism If You Link To It is BHGP's semi-regular news roundup.

Alignment Check.  When Big Ten divisions were announced in early September, commissioner Delany was quick to state that those divisions did not necessarily apply to basketball, and with good reason: Based on both recent and long-term records, the "East" division, with Indiana, Purdue, Illinois, Wisconsin, and Ohio State, would be exponentially more difficult than the "West" division, comprised of Michigan State and the basketball equivalent of the SEC West.  As Delany said at that time, the conference alignment for basketball would be discussed among the basketball coaches and administrators.

Earlier this week, Delany was asked to elaborate on what Big Ten basketball in the age of twelve teams might look like.  He broke a little news, but refrained from giving too much away:

"Beyond that, I think it probably looks like there’s seven teams plays twice and four teams you’d play once. How you do that, whether or not there’s going to be any rivalries protected, that’s sort of to be determined. All of that could change if there’s a strong movement among coaches and administrators, but I think that’s where we are."

In the article linked above, Scott Dochterman examines what rivalries could be protected, positing that Nebraska's football rivalry with Iowa might be extended to the hardwood.  Of course, where a Hawkeye-Husker football rivalry might resemble this: 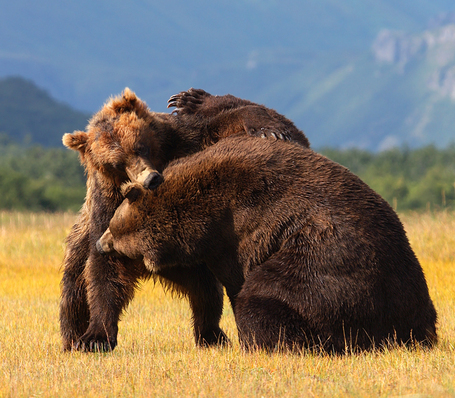 A Nebraska-Iowa basketball rivalry, at least in its current form, is closer to this: 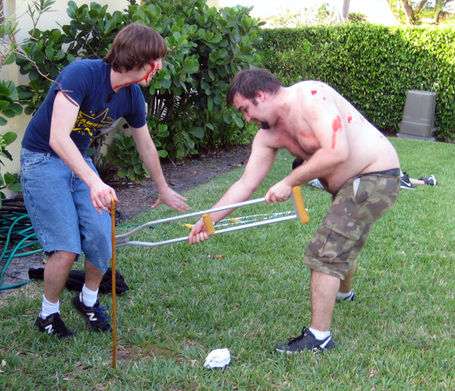 Dochterman also suggests Iowa-Illinois could be in the cards; given that we got pantsed (and not in a good way) in the football rivalry draft, I would hope the Big Ten would throw us a bone when it comes to basketball.  Gary Barta should hope so, as well, because if he goes into the divisional alignment meetings with the assets that Iowa brings to the table and comes away married to Purdue in football and Nebraska in basketball, he's the most ineffective athletic director in the conference.

Caring is Creepy.  Plenty of news on the basketball recruiting front, as McCaffery has filled half his 2011 class in the last two weeks.  First came the long-awaited commit of Cedar Rapids Washington guard Josh Oglesby.  The 6'5" Oglesby, a lifelong Hawkeye fan, had been ignored by Lickliter, but quickly moved Iowa to the top of his list  -- a list that included Illinois, Northwestern, Minnesota, Arizona State, and the cream of the Midwestern mid-major crop -- when Fran McCaffery assumed the controls and made an offer in July.

Soon after Oglesby made his announcement, he was joined by Aaron White, a 6'7" small forward from Strongville, Ohio.  White received three stars from the recruitniks, and had offers from Boston College, Northwestern, and some east coast mid-majors.  White is the first commit landed by Sherman Dillard, the former Nike camp administrator brought into the staff this spring.

"We don't ask our players to run the floor.  We ask them to sprint the floor."  In a standard-issue preseason fluff piece in the Quad City Times, McCaffery continues to say what he needs to say: That this ain't Todd Lickliter's system anymore.  Gatens has cut 15 pounds.  Our players are buying into the new system.  Jarryd Cole is fully recovered from his knee injury.  The tempo will be pushed.  There is little doubt this team won't be great; with just ten scholarship players, adjustments to a new staff and system, and the inherent difficulty of winning in the Big Ten, it will likely be another long year.  But at least the new guy gets the PR right (we can't say the same for the rest of the department).  There's a little hope stemming from that, and a little hope is really the only thing Iowa basketball fans need right now.