Share All sharing options for: Wha Happened? Week Five Around The Big Ten

Wha Happened? is the weekly round-up of the rest of the games that were in the Big Ten -- you know, the ones that were going on while you were shotgunning that beer, or watching Iowa, or sleeping off that early-morning tailgating.  Who won?  Who lost?  Who made us quiver with fear?  Who made us laugh hysterically?  In short... Wha Happened?  Now with new-and-improved performance ranking system!

But heroic playcalling aside, did this game finally expose the Badgers as pretenders?  Did it confirm the Spartans as contenders?  Both?  Neither?  After a month of mostly struggling with mediocre opponents (Austin Peay excluded), Wisconsin finally played a team with a pulse and the results were unkind.  The Wisconsin defense forced three turnovers, but when they weren't taking the ball away from MSU, they were pretty much letting Sparty roll all over them.  Kirk Cousins had a strong day, going 20/29 for 269 yards and three touchdowns (as well as two interceptions), and Sparty got 175 yards on the ground (more than Wisco's vaunted ground game got, in fact).  The Badger offense wasn't much better than their offensive counterparts, though: Scott Tolzien didn't turn the ball over, but he was a miserable 11/25 for 127 yards and a single touchdown, while John Clay was held under 100 yards (80 yards on 17 carries) for the first time in ten games and was often less effective than his smaller (and speedier) understudy, James White.  Before the season began, Wisconsin was widely assumed to be the Big Ten squad with the best chance to challenge Ohio State and Iowa for conference supremacy; based on the results of this game (and the rest of the season to date), it's hard not to see Michigan State in that role instead.

PLACE
#19 MICHIGAN 42, INDIANA 35 (coverage)
If these rankings were determined by Denard Robinson's performance alone, Michigan would be a cinch to be in the "WIN" category this week (and probably every week).  If these rankings were determined by just the performance of the Michigan defense, they would be a lock for the "worst in show" category.  Such is the dichotomy of the 2010 Michigan football team, a team that has one of the nation's most breathtaking offenses married to one of the nation's most putrid defenses.

The spectacular one-man show that is The Denard Robinson Experience hit Bloomington this weekend and spectators reported the same after-effects as spectators in Ann Arbor and South Bend: dizziness, shortness of breath, and a general slack-jawed sense of wonder.  Robinson rang up yet another almost-500 yards of total offense, totaling 277 yards through the air (and three touchdowns) and another 217 yards on the ground (and two more touchdowns), becoming the first player ever to go over 200 yards rushing and passing in a game twice in a single regular season.  Like every other performance of The Denard Robinson Experience this season, there was a slight hitch when the star of the show went down after receiving a big hit, but he made a triumphant return shortly thereafter.  All told, Robinson was, in a word, ohmygodfuckingincredible -- yet again.  Unless you object to the discussion of Heisman candidacy this early in the season as a matter of course (and bully for you if you do), there's no earthly reason to deny him his status as the frontrunner for that award.  Has he put up his staggering numbers against a collection of defenses that range from "suspect" to "holyshitfuckingterrible" thus far?  Sure, but that's true of any potential Heisman contender at this point (or of any past Heisman contender at this point in the season). The fact remains that Robinson is doing things that no other player has ever done before --  and he's making it look utterly effortless.

On the other hand, reports of the Michigan defense's awe-inspiring awfulness remain wholly accurate.  Yes, Indiana has one of the Big Ten's better offenses, but giving up 568 yards of total offense and 480 yards through the air is stupefyingly horrible.  It's beyond cliche to suggest that their defense will be the source of their downfall but, really, what else are you going to say about this Michigan team?  Their defense couldn't stop a pee-wee football team at this point.

SHOW#2 OHIO STATE 24, ILLINOIS 13 (coverage)
So maybe there are a few chinks in Ohio State's armor of invincibility after all?  A week after conceding 20 points to Eastern Michigan, the Buckeyes found themselves locked in a hard-nosed battle with... Illinois?  A Ron Zook-coached Illinois team?  Really?  Yes, really.  Illinois has given Ohio State far more trouble than their season-wide results would suggest (see also: 2007) and the same was true this weekend.  Ohio State couldn't build a double-digit lead until deep in the fourth quarter against the feisty Illiini defense, although the efforts of the Buckeye offense were certainly stymied by the invisible gremlins that attacked Terrelle Pryor's knee and kept him out of commission for most of the third quarter.  (AOSQBHG is a bit of a pussy compared to his Iowa-based cousin -- he merely teases crippling, season-altering injury.)  Fortunately for the Buckeyes, any real hope of a 2007 redux was extinguished by the fact that Mikel LeShoure, while good, is no Rashard Mendenhall and Nathan Scheelhaase is no Juice Williams (the 2007 Ohio State vintage only; Scheelhaase may already be an improvement on the dilapidated 2009 version of Juice).  Also, this man was no longer managing the Illinois defense, striking fear into Commandant Tressel and his pinko commie charges. 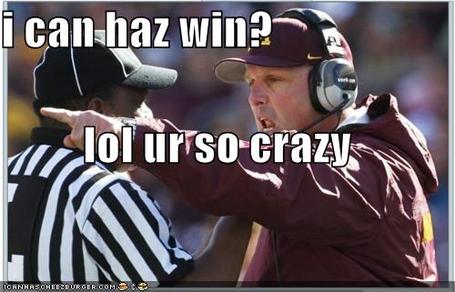 The Gophers are 1-4, but as coach Tim Brewster insisted Sunday, "we could be sitting here 5-0 right now." (via)

Also, your weekly Dan Persa Watch update: the nerdy man's version of Denard Robinson had another rather excellent game, going 23/30 for 309 yards passing, 2/1 TD/INT and adding 99 yards rushing, to boot.  He's pretty damn spiffy.  Also also: just Northwestern still can't run the ball with an actual running back, even against the collection of invalids that Minnesota calls a defense (78 yards on 25 carries).