Share All sharing options for: A Winner Is You! 2010 Iowa Wrestling Preview: 174 lbs. 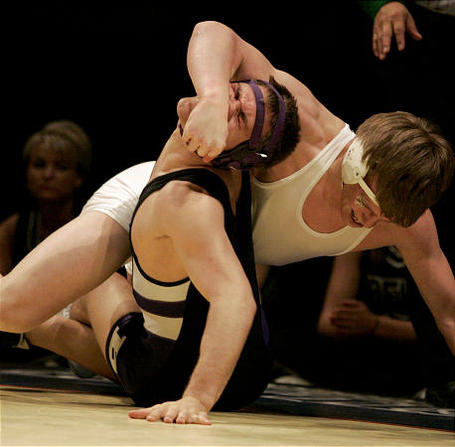 That's high school Ethen Lofthouse on the right, in the process of TEARING SOME DUDE'S GODDAMN FACE OFF.  Yeah, he might have the right attitude for the Iowa wrestling team.  (PHOTO CREDIT: Tim Hussin, The Deseret News)

The Known Quantity
174 brings us the other half of the Stormin' Mormon tag team in the upper weights this year, Ethen Lofthouse, the nephew of our presumptive starter at 197 lbs., Luke Lofthouse.  Lofthouse the Younger is less-experienced than his uncle, mostly because he's just a redshirt freshman, but also because he was stuck behind Jay Borschel, Iowa's other national champion from a year ago.  JayBo, of course, had an utterly outstanding senior season -- 37-0, capped off by Big Ten and NCAA championships, including a thrilling come-from-behind 10-9 win over Virginia's Christopher Henrich that was probably the match of the tournament and a shockingly dominant 6-2 win over Cornell's Mack Lewnes in a match between two undefeated guys.  So them's some big shoes for Ethen (ELo? We need to work on this) to be stepping into this winter.

The good news is that the hype on Lofthouse is that he's really good -- and, indeed, his results wrestling unattached last year back that up pretty nicely.  He went 30-7 and took first place at the Brand Open, the York College Open, and the Grand View Open.  He even put together a fairly respectable record (2-2) against some guys in the preseason rankings this year (Minnesota's Cody Yohn and Scott Glasser, Oregon State's Colby Covington), so he wasn't just beating up on the poor dudes from Wisconsin-Osh Kosh and Missouri Baptist.  As with, oh, pretty much everyone not named Matt McDonough on this year's team, though, the question is how well he can take those near-misses and narrow wins against top-level guys (as well as domination of lesser opponents) and translate it into sustained, high-level success of his own.   Lofthouse was a hell of a prep wrestler (four-time state and regional champ in Utah) and he looked promising last year, so there's plenty of reason to hope that he'll be able to hit the ground running as a starter this year.

The Possible Options
First things first: the official roster lists Grant Gambrall at 174 in addition to 184, but as we discussed last week, he's pretty much locked-in as the starter at 184, so there's not much point discussing him here.  On the other hand, outside of Gambrall, the only other alternatives are true freshmen Mike Evans and Jeremy Fahler and senior Jake Kerr, who's moving up to 174 from 165, per Andy Hamilton.  We've talked about Tom Brands' policy on redshirting in the past (in short: he's a big, big fan of it), which means that Evans and Fahler aren't too likely to see action unless there's a major emergency.  Evans is one to watch for the future, though, as his bio on Hawkeye Sports makes clear:

He was the fifth-ranked recruit nationally last year (and the highest-ranked guy in Iowa's top-ranked class), so he certainly looks like a future stud.  He and Lofthouse could have an interesting battle at this weight in the future (or, more likely, one of them moves to a different weight).

In any event, with those two likely redshirting and Gambrall seemingly entrenched at 184, that leaves Kerr as the only real cover for Lofthouse at this weight.  Kerr's been a frequent fill-in for Iowa during his career here, wrestling at 157, 165, and 174 at various points in his career.  He was expected to compete with Aaron Janssen for the starting spot at 165 this year; the fact that he's instead moving to 174 would seem to suggest that Janssen won that battle.  Despite the move, there's been no buzz that the starting spot here is anyone's but Lofthouse's, which means that Kerr would likely be serving as a back-up once again.  His experience at 174 has been pretty limited; he won a match while filling in for Jay Borschel in '08-'09, but that's really about it.  Chances are, if Kerr is pressed into duty he'll be what he's largely been at 157 and 165: a serviceable, but not exceptional, fill-in.

The Potholes In The Road
The bad news for Lofthouse (and Iowa) is that this is one weight that might not be all that wide open for new faces; six of last year's All-Americans are back -- everyone but Borschel and Nebraska's Stephen Dwyer.  That includes last year's runner-up (Lewnes) and third-place finisher (Henrich), as well as Illinois' Jordan Blanton, Central Michigan's Ben Bennett, Penn's Scott Giffin, and UNI's Jarion Beets.  There's also some good wrestlers returning that weren't All-Americans, like Stanford's Nick Amuchastegui, Iowa State's Jon Reader, Minnesota's Scott Glasser, Purdue's Luke Manuel, Oregon State's Colby Covington, and Oklahoma State's Mike Benefiel... whew.  So, yeah, this appears to be one of the deepest weight classes in the nation -- Lofthouse is going to have a big hill to climb to get to All-America status this year.

The Reasonable Expectation
As we just discussed above (did you forget?  Man, your ADD is really getting worse), this looks like one beartrap of a weight on the national level.  The silver lining there is that doesn't look quite so beastly on a Big Ten level; Blanton is an elite talent, but Manuel isn't and Lofthouse already split a pair of matches with Glasser last year.  There's every reason to think that Lofthouse could make some noise within the league this year -- a top 3/4 finish (or even runner-up to Blanton) doesn't seem pie-in-the-sky at all.  On the other hand, he could do that, have a very good season otherwise... and still not be an All-American at the NCAA Tournament because this is just a nasty weight, nationally speaking.  We're not going to totally rule it out now, but until we see how Lofthouse performs against top-level guys this year, it's asking too much to expect him to be an All-American at this point.  There's just too much other more proven quality competition out there.