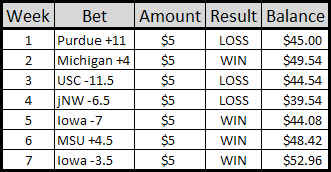 Sometimes when I look at the grid, I can tell who the runaway poll winner is going to be. I think this is one of those weeks. I'm not going to say who it is now, because I believe very intensely in the integrity of the poll, but I'll whisper it in your ear a little later. Since I'm not very good at keeping secrets, I'm going to follow this with a sentence of gibberish to stop myself from giving it away. Motor oil pelican tits dickhelmet cornvacuum coffeetable chinstrap grandmother throatrocket cocksack pie. 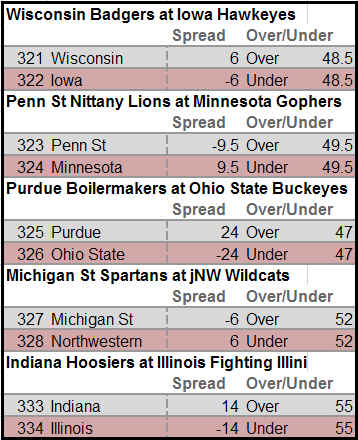 First cast your vote. Then stayed tuned after the jump for my favorite part, where I 'name and shame' commentors and pick the smartest anonymous internet person from last week....

Y'all fucked up. Emphases mine, so your eyes can see the failure.

Illinois. The Zookster is taking the Joe Pa route and just letting the people with a clue coach. I might even take them straight up. I also love OSU. I also really like spaghetti.

Take the Iowa/Michigan Under. Even if Iowa puts up 35(not likely), Michigan will NOT get over 16 points in said scenario. If Michigan puts up 21, I also highly doubt Iowa will score more than 31. Write it down. Bet the under if you know what’s good for you.

but when has Belima won against a ranked Big Ten team? Let alone the #1 team in this great land we call America. OSU to cover.

The more interesting over/under would be on TP’s passing yardage – personally I would say 150. Sweatervest goes into lockdown mode with the offense and realized that he can win this thing with strategic punting.

Simply playing the odds you have to put $5 of the Fightin’ Zookers to win, payout is too good to pass up because hey, it’s your money.

But then......there was a break in the clouds. It's rare that a commentor can combine sweet religious prose with football gambling accuracy, but here is a phenomenal example. I give you, the winner of this week's HAWKSTRADAMUS award:

So Brewster and his Gophers...

got up and fled in the dusk and abandoned their tents and their horses and donkeys. They left the camp as it was and ran for their lives. 2 Kingss 7:7 Purdue -5.5 is money

Pride goeth before destruction, and a haughty spirit before a fall.MSU -7 over the Zookerites sayeth the Lord. Proverbs 16:18

"Osu daughters of Israel, weep for Sweatervest, who clothed you in scarlet and finery, who adorned your garments with ornaments of gold. Oh, how the mighty heroes have fallen in battle! Terrell lies dead on the hills. 2 Samuel1:24-25Wisconsin wins straight up and tSOU must lie with the uncircumcised.

In that day they will say, "Surely this is our God; we trusted in him, and he saved us. This is the LORD, we trusted in him; let us rejoice and be glad in his salvation." The hand of the LORD will rest on this mountain; but Denard will be trampled under him as straw is trampled down in the manure." Isaiah 25:9-10 Iowa -3.5 so let it be written