Share All sharing options for: A Winner Is You! 2010 Iowa Wrestling Preview: 184 lbs. 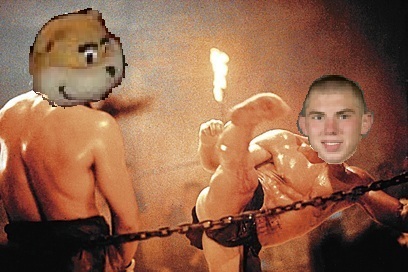 This would probably be kind of totally illegal.  But fun!

The Known Quantity
As we enter the second half of our 2010 previews, the information we "know" gets scarcer and scarcer.  Prior to this weight, everyone we'd profiled (sans Derek St. John at 157) had gotten some decent run with the first-team guys, usually as injury replacements.  From here on out, though, that often isn't the case.  At 184, Iowa's expected to go with another local product (from Iowa City West), sophomore Grant Gambrall.  Phil Keddy ably manned this spot on the roster for the last four years, and if he never quite reached the heights we hoped he would (he finished 6th, 4th, and 8th at the last three NCAA Tournaments and 7th, 3rd, and 2nd twice in his four Big Ten Tournament appearances), he was still very good indeed.  Gambrall spent his redshirt freshman season mainly competing in open tournaments, although he also made an appeareance at Midlands (he went 5-3 and finished 6th) and made two appearances with the first-string guys, in duals against Rutgers and just Northwestern.  Gambrall did his part in both duals, recording an 11-3 win over Jesse Boyden against Rutgers and notching a 9-3 win over Aaron Jones in the jNW dual.

He also finished first at two open tournaments (Harold Nichols Open and Wisconsin Open), third at the Grand View Open, and fifth at the Kaufman-Brand Open.  He may not have taken those events by storm, but he posted perfectly solid results.  The question is what happens when Gambrall is facing top-of-the-line opponents week in and week out.  That remains an open question since he didn't record too many wins over ranked opponents last year (although he obviously also had few opportunities to do so).  In the initial preseason rankings, Gambrall ranks anywhere from 9th (WIN) to 12th (The Open Mat), which seems quite fair.  He has a strong record of success as a prep (two-time state champ) and did well while wrestling unattached the past two years, but we still don't really know what will happen when he hits the big time.

The Possible Options
As is the case with most of Iowa's upper weights, there aren't a whole lot of other options beyond the top guy.  The official roster lists just two other guys at 184, Tomas Lira and Vinnie Wagner.  Lira, a redshirt freshman, went 10-11 in all competitions last year; Wagner, a junior, went 9-6 in all competions last year.  One of Wagner's losses was a lopsided 19-4 technical fall to Gambrall.  Suffice to say, it would be quite a surprise if Gambrall wasn't starting at 184 this year and if something happens to him, the options in reserve are not exactly inspiring.

The Potholes In The Road
Four of last year's All-Americans are back, including Boise State's Kirk Smith (runner-up), Wyoming's Joe LeBlanc (4th), Oklahoma State's Clayton Foster (6th), and Kent State's Dustin Kilgore (7th).  Foster is expected to move up to 197 lbs this year, but there are some really tough new guys entering (or returning to) the fray this winter.  Edinboro's Chris Honeycutt is coming off a redshirt season and he's third or fourth in most of the preseason polls; he finished highly in the Eastern Wrestling League (which totally sounds like a minor league competitor to the WWF in the '70s) tournament in 2008 and 2009.  Penn State's Quentin Wright is also coming off a redshirt season and moving up from 174; two years ago, he was a Big Ten runner-up and a 6th-place finisher at the NCAA Tournament; he could be Gambrall's toughest challenger in the Big Ten.  Wisconsin's Travis Rutt and Purdue's A.J. Kissel should be two of the other top guys in the Big Ten.  Finally, Oklahoma State's Chris Perry (brother of former Iowa national champion, Mark Perry) is also coming off a redshirt year; he went 15-1 while wrestling in open tournaments a year ago.

The Reasonable Expectation
Outside of Smith, who's absolutely legit (national runner-up, two-time NCAA All-American, two-time Pac-10 champion), there might be more excitement about the guys coming off redshirts than the guys returning from last year.  Honeycutt could be a strong national contender and Wright and Perry may be the future of this division.  On the other hand, that also paints a picture of a division that's fairly wide open.  Smith will be the odds-on favorite to make the championship match of the NCAA Tournament again this year, but after that all bets are off.  That said, we still need to see how Gambrall performs against high-level competition before we can get too excited about him making a run.  A top three finish in the Big Ten seems very possible, with a realistic shot at being an low All-American at the NCAA Tournament.