Share All sharing options for: Bret Bielema Declares War on Ricky Stanzi, Our Way of Life

BHGP would like to remind you that if you read this story and find it necessary to talk about American politics in the comment thread, you are both an oblivious idiot and not welcome here. As has been the case since the beginning of BHGP, political talk is not allowed. You can do that on literally any other Hawkeye message board already anyway.

Patriots! Read this, but beware: it will disturb you. From the hated Bret Bielema's appearance on the radio show of notorious enemy of Kirk Ferentz Jim Rome:

On whether Wisconsin sent a message by winning with smashmouth football:

"We do. We call it American football around here. Two tight ends, two backs, one wide receiver and occasionally get two wide receivers on the field, but it was [a message]. ... What we do 365 days a year came through on Saturday. Our kids really imposed their will and it was really fun to watch."

"American" football?! We are real Americans here, Bielema, and you know it. Ricky Stanzi, please remind everybody:

This incident, unfortunately, speaks to the heart of Bret Bielema: he purports to impose his will, but he can't bring himself to talk about it honestly off the field. His tale to the press about blaming "the card" for his 2-point conversion against Minnesota sounded plausible but totally dishonest at the time, and now it turns out that it's probably not true either. And here, more troublingly, Bielema wraps himself in the flag to avoid the question of honesty--and the treasonous truth therein.

Also, I have stopped taking my medication as of a week ago*.

First of all, EVERY football team in the NCAA plays "American" football. That's simply a designation to indicate the rules in place. Unless Bielema is suggesting that some teams play Australian Rules Football (which would be kind of awesome but an absolute logistical mess on the gridiron unless the opponents and refs play along), he's making a distinction without a difference.

What he means, though, is that Wisconsin plays a style of football popularized during a period of time that roughly spans the late '50s through the end of the '80s. You know what was America's greatest threat during that entire time period? Nixon The Communists! Or, as we called them, the Reds! Now remind me again, what's Wisconsin's primary color? 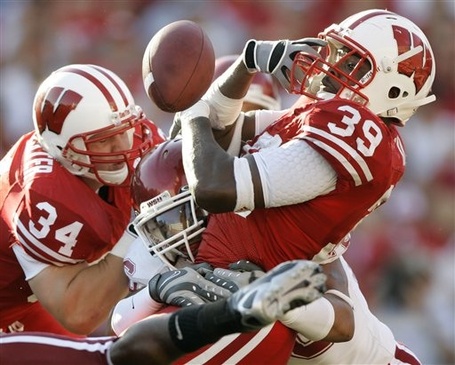 We know that Ricky Stanzi is a Real American, and we know that he is currently fourth in the entire nation in passing efficiency. We know that the combined amount of Stanzi's pass attempts and rushes on the season equals the amount of rushes by Adam Robinson, Jewel Hampton, Brad Rogers, and Marcus Coker combined. Therefore, we know that a Real American offense doesn't de-emphasize the passing game, as Bielema is so clearly trying to do, but embraces it as an innovation of the technology Americans depend on week in and week out. Sure, Bielema can run the ball 70% of the time, but who is he trying to hurt by doing that? Is it Real America? Maybe.

Stalin was a horrible person who did horrible things, but at the very least**, he was honest about who he was: a Soviet to the core, and haters gonna hate. Bielema's attempt to couch his hostile efforts toward America in a dishonest, patriotic light only indicates a core, crucial disbelief in his own ideology. But this is no surprise; what else could explain The Tattoo?

And you know what, man? YOU KNOW WHAT? GUESS HOW MANY GRANDPAS I GOT. GO ON, GUESS. NINE. I GOT NINE OF EM, SIX OR SEVEN OR ELEVEN OF EM*** ALL STILL ALIVE. EVERY DANG ONE OF THEM'S STILL ALIVE, AND ALL FIFTEEN DONE SERVED IN THE CIVIL WAR SO WE WOULDN'T HAVE TO SACRIFICE OUR FREDOM TO THE BRITISH.

ANYWAY I'LL BE DING DANG DAMNED IF ALL EIGHTEEN GRANDPEEPERS I GOT ARE GONNA DIE SO WISCONSIN CAN PRETEND TO BE AMERICAN. BAD ENOUGH THEY'RE COWARDS ENOUGH THAT THEY USE THE UPPER PENINSULA LIKE A CONDOM BEFORE THEY TOUCH CANADA LIKE YOU KNOW THEY WANNA DO.

SEXUALLY PROBABLY, I DUNNO, I DON'T KNOW THEM, BUT PROBABLY

POINT IS THIS: SHUT UP WISCONSIN, AND SUCK A RUSTY ROBOT COCK FOR ALL I CARE

*According to sources with knowledge of the situation, the only meds Jacobi is on are Beefeater and Svedka, so we know that's a lie.--BHGP

**And this is a very least.

***Jesus, who approved this post?--BHGP