Share All sharing options for: It's Not Plagiarism If You Link To It Wears White After Labor Day 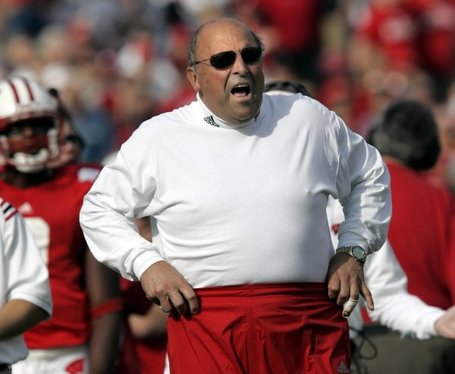 Iowa and Wisconsin have played football in 83 of the last 85 years -- the teams rotated off each other's schedule for two years after Penn State joined the league in 1991, leading to the Big Ten's decision to protect two rivals for each team -- but Saturday will mark the end of an era.  Divisional realignment separates the Badgers and Hawkeyes, and the historic nature of Iowa's rivalry with Purdue (and Wisconsin's with Minnesota, we suppose) removes protected status from the Iowa-Wisconsin rivalry.

The discontinuation of the annual Iowa-Wisconsin game has been a point of contention for at least one of us at BHGP; when the Big Ten creates a protected rivalry from scratch between Penn State and Nebraska and reignites Michigan-Minnesota, but simply can't find a way to protect the most competitive annual protected game in league history, it looks simply like lack of effort.  If Jim Delany is to be believed, that's not the case:

"Lots of discussion. Probably the most-discussed (topic)," Big Ten Commissioner Jim Delany said. "I think that we knew once we committed to the principle of competitive equality that it was going to be really difficult to not separate Michigan from Ohio State and Penn State from Nebraska. Likewise, it was difficult not to separate Iowa and Wisconsin.

"We were driven by the principle of competitive equality. We were driven by the principle of maintaining as many of the important rivalries as we could. But we also recognized in the west we were going to have some problems. It was debated and advocated and argued over. We went into those meetings together, we went out together but in between there was a lot of debate."

The problem, of course, is that even with a split, Michigan and Ohio State remained protected, and Penn State and Nebraska was designated as a rivalry for competitive and financial (but by no means geographic or traditional) reasons.  Iowa-Wisconsin, however, was sent by the wayside even though those two schools had geographic and traditional ties and occupied a second tier of success all to themselves, so that Wisconsin's rivalry with lowly (and poorly-followed) Minnesota could be maintained and Iowa could be shipped to West Lafayette for a game nobody wants.  Given the emphasis on competitive equity and commercial considerations that drove every other decision regarding expansion and divisional alignment, it's an odd place to draw the line.

There remains the slight possibility that the nine-game conference schedule may lead to two protected interdivisional games, reuniting the Hawks and Badgers.  But for now, we'll see our cheese-fed friends four times every ten years.  Enjoy this weekend.  Next year, it's the Boilermakers.

Fun with Depth Charts.  The Wisconsin two-deep was released yesterday to little fanfare -- if there's one thing we've learned about this year, it's that the Monday depth chart has little effect on who actually plays on Saturday -- and fewer surprises.  Despite giving a hilarious five-second interview to a TV crew following the Michigan game, in which he described himself as "speechless" after breaking the all-time Iowa receiving yardage record, Derrell Johnson-Koulianos remains the starter at wide receiver.  Brett Morse, who missed last week with a lower back injury, is listed as a starter and expected to be ready to play.  Likewise, Mike Daniels is back to his spot as co-starting defensive tackle despite missing a chunk of Saturday's game with an apparent elbow injury.  Jeff Tarpinian, who has missed almost the entirety of Iowa's last two games with a stinger, is not listed in the middle linebacker two-deeps; Troy Johnson is again his substitute.  Everything else is steady as she goes.

The three-time defending national champion Iowa Hawkeye wrestling program, which has to replace nine of ten starters (as I've learned from Ross), comes in at #11 in the preseason polls.  Tom Brands says he doesn't care.  My guess is his wrestlers might, and that's probably bad for everyone who has to face them.

Iowa recruit Melvin Gordon, who has torn up Wisconsin high school football this season, took a visit to Madison this weekend to see the Badgers play Ohio State.  Have no fear, though, Iowa stalkers: He went with a group of high school classmates, he contacted the Iowa staff to notify them of the trip, and he remains committed to the Hawkeyes.

ESPN's Adam Rittenberg projects Iowa into the Rose Bowl; Off Tackle Empire's resident Iowa supporter (and FOTP) Bama Hawkeye isn't quite so optimistic, placing the 10-2 Big Ten co-champs in the Citrus Bowl with Arkansas.  The driving force behind both of these rosy (no pun intended) outlooks is the schedule, which has everyone conceding that the road to the last 11-team Big Ten championship goes through Iowa City.

At this time last year, incoming Iowa freshmen basketball players Devyn Marble and Melsahn Basabe had never heard of each other.  Two commitments and a summer of text messages later, and they're now apparently best friends.

And finally, in MOST HATED RIVAL ONLY NOT SO MUCH IN BASKETBALL news, the Purdue injury bug has extended to the basketball program: standout forward Robbie Hummel re-tore the ACL that knocked him out of last season.