Share All sharing options for: The Big Ten Gets Patriotic, Names Ricky Stanzi Big Ten Offensive Player Of The Week

Another week, another Big Ten Player of the Week honor for a Hawkeye.  Ho hum.  Well, yeah... but for once it's not a defensive player or a special teams demon.  Yes, an Iowa offensive player has been given Big Ten Player of the Week honors, and it's maybe not who you would have expected.  The BHGP faithful (or at least the folks who vote in the polls around here) gave Adam Robinson "man of the match" honors for his manly efforts on Saturday (203 total yards of offense, 2 TDs) and we've spent much of the post-game analysis lavishing praise on A-Rob and DJK.  But in the eyes of the Big Ten, the Iowa player most deserving of praise for his efforts in Saturday's 38-28 win in Ann Arbor was our favorite Heismanzi candidate*, the Americanzi himself, Ricky Stanzi:

OFFENSE:
Ricky Stanzi, Iowa
SR, QB, Mentor, Ohio/Lake Catholic
Stanzi completed 70.8 percent of his passes with three touchdowns to help lead Iowa to 38 points in a road triumph at Michigan, its highest point total ever against the Wolverines. The senior quarterback completed 17 of 24 passes for 248 yards and led the Hawkeyes offense to touchdowns in each of its five trips into the red zone. After falling behind 7-0 in the first quarter, Stanzi connected on scoring tosses of 14 and 31 yards to wideout Derrell Johnson-Koulianos to help Iowa build a 21-7 halftime lead. The Ohio native added a 19-yard scoring strike to Johnson-Koulianos in the fourth quarter to give the Hawkeyes a 35-14 advantage. After Michigan pulled within 35-28, Stanzi guided Iowa on a 10-play, 49-yard drive for a field goal with 2:53 remaining to secure the 38-28 victory. He is now 23-5 as a starting quarterback and has at least one touchdown pass in each of the last 15 games he has played. Stanzi earns his first career weekly accolade.
LAST IOWA OFFENSIVE POW: TE Tony Moeaki on Oct. 11, 2009.

To be fair, it's not like we have anything against Stanzi (indeed, regular readers of this site can attest to our longstanding affection for the man) or that he had a bad game -- 17/24, 248 yards, 3 TD is a pretty fine effort.  He managed the game smartly, handled the intensity of the Big House well, and avoided any crippling errors (something his Michigan counterparts could not do as they tossed three hideous interceptions).  Sure, there's one notable caveat for his performance -- it came against a Michigan secondary that even Michigan Tech would be ashamed to claim as its own -- but Stanzi has, somewhat quietly, been having a pretty excellent season: 68.3% completion, 1474 yards, 13/2 (!) TD/INT.  At his current pace, that would give him some pretty gaudy stats for the year: 198/290, 2948 yards, 26/4 TD/INT.  Needless to say, that would be the best season for an Iowa QB in quite some time; even Drew Tate's best season (2005: 219/352, 2828 yards, 22/7 TD/INT) wasn't that good.  Mind you, the odds of Stanzi maintaining this pace are fairly slim, considering that he still has to face three stiff defenses (Sparty, Wisco, Ohio State) in Iowa's remaining six games -- but he's still performing at a high level and that's certainly worthy of some recognition.

* Note: The Heismanzi Trophy should not be confused with a similarly-named trophy handed out by an oft-litigious organization.  Nope.  Totally different.  In fact, Ricky Stanzi is the one and only contender for the Heismanzi Trophy -- he's kind of a shoo-in.

Also, FUN FACT: Notice the date of Iowa's last Big Ten Offensive Player of the Week?  Remember who the opponent was that week?  If not, here's a clue: 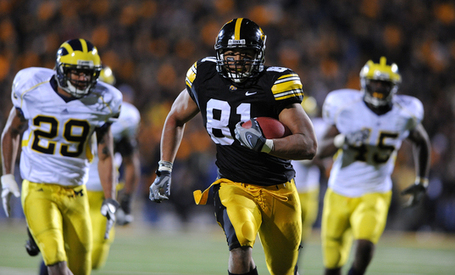