Share All sharing options for: A Winner Is You! 2010 Iowa Wrestling Preview: 133 lbs. 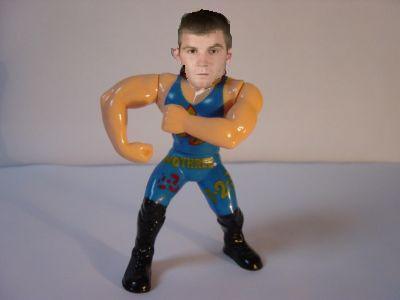 The Known Quantity
The official roster lists a lot of guys at 133, but there's really only one likely contender: Nate Moore, who ably filled in for Dan Dennis last season while Dennis nursed a badly sprained ankle.  Moore went 13-7 overall and 3-2 in dual meets last year.  Unfortunately, as soon as Dennis was back up to speed, Moore went down with a gruesome staph infection that left him incapacitated for the remainder of the season.  The good news is that he's apparently fully recovered and kicking ass in the training room.  The less-good news is that Moore, like so many of the guys expected to feature on this year's team, is something of an open question in terms of his ability against high-level foes.  Few of his wins a year ago were over top-notch guys (no offense to the dudes at Dana and Triton), although he did score a tight 2-1 win over Central Michigan's Scotti Sentes and lost a tight 8-6 decision to Boise State's Andrew Hochstrasser in overtime (both Sentes and Hochstrasser are preseason top ten guys).  So, yet again, the hope is that another year's worth of experience enables him to turn those close losses into actual wins this year.  We know he has the skills: Moore had a slightly less decorated career than his brother Nick (a true freshman this year), but that means he was "just" a two-time state champion.

The Possible Options
As noted above, there's no shortage of guys listed (or co-listed) at 133 lbs. on the roster.  A few of the guys are double-listed at 125, including redshirt freshman Tony Ramos and junior JJ Krutsinger.  Ramos went 12-0 wrestling unattached at 133 last year, but he wasn't facing high-level competition in those matches.  Krutsinger went 14-4 at 125 last year.  There's also sophomores Mark Ballweg and Joe Moore (no relation to Nate and Nick) nominally in the mix.  Ballweg went 11-5 a year ago (and 1-2 in matches against fellow Iowa guys, beating Tyler Clark, 4-2, and losing to Nate Moore and Ramos, 3-2 and 4-2 respectively), but he seems like a more likely option at 141.  Joe Moore did not compete last year and went just 0-2 the year before that; let's just say the odds of him getting the nod as starter are pretty slim.  And, of course, if Matt McDonough decides to move up from 125 lbs., he'd be the odds-on favorite to start at this weight, but as we noted earlier, it seems more likely that he's sticking at 125 for another year.

The Potholes In The Road
Five of last year's All-Americans are departed from this weight, including our very own Dan Dennis (national runner-up) and last year's national champion (Minnesota's Jayson Ness) and third-place finisher, Michigan State's Franklin Gomez.  Dennis, Ness, and Gomez have had a stranglehold on this weight over the past few years, especially in the Big Ten, so their departures should really open things up.  The two favorites to step in and fill that void are Hochstrasser and Oklahoma State's Jordan Oliver.  Hochstrasser missed most of last season due to injury, but he finished 4th in 2008-2009 and he's plenty legit.  Oliver may or may not move upto 141 lbs., but if he doesn't he'll be a force at 133 -- a slow, methodical force, but a force nonetheless.  He finished 4th at last year's NCAA Tournament.  The top name in the Big Ten figures to be Wisconsin's Tyler Graff, who was 5th at last year's NCAA Tournament and ought to be excited to be able to compete in a Big Ten that doesn't have Gomez, Dennis, and Ness.  A few other names to know are Cal Poly's Boris Novachkov (and with a name like that he's gotta be a filthy Commie), Hofstra's Lou Ruggirello, Cornell's Mike Grey, the aforementioned Sentes, and Ohio State's Ian Paddock.

The Reasonable Expectation
For the last three years, 133 has consistently been among our top five strongest weights, first with Joey Slaton in 2007-2008 and then with Dan Dennis the last two years.  Those are big shoes for Nate Moore to fill -- Slaton finished as an NCAA runner-up in his one year of action and Dennis was a runner-up last year and an All-American the year before -- but he's a talented guy at a weight where Iowa often excels (it's probably no coincidence that Iowa's lower weights have been especially good since the arrival of Tom Brands, a lower-weight guy himself).  It's hard to say how the national scene will shake out and, unfortunately, Moore probably won't get to see too many of those guys before the NCAA Tournament.  On the other hand, the Big Ten looks really wide open with Gomez, Dennis, and Ness all gone; Moore should definitely have an opportunity to make some noise in league action this winter.  It would be disappointing if he wasn't at least in the top four at the Big Ten Tournament, and he's very capable of more.  Nationally, he should have a good opportunity to make All-American; anything beyond that would be gravy.

For past entries in this series, MAKE WITH THE CLICKY