Iowa's scout team has a pretty gargantuan task in front of it this weekend: figure out a way to replicate Denard Robinson and the Michigan Wolverines offense. And while coaches can probably scheme something similar to the Michigan spread for the defense, finding a suitable physical analogue for Robinson is a much more daunting task.

Fortunately, the coaching staff has found a member of the team to fill that role. Ladies and gentlemen, meet Iowa's Denard Robinson. 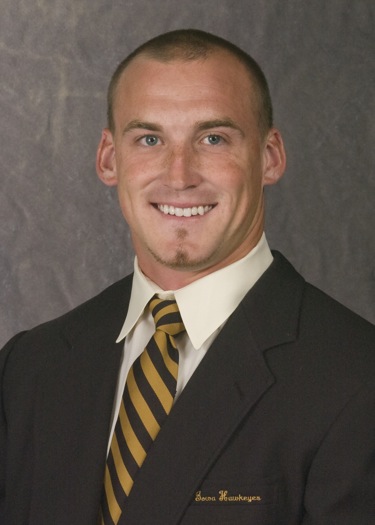 Okay. Racists aren't going to be happy about this development. That's Nick Kuchel, he's from Kingsley, Iowa, and he's a senior walk-on wide receiver who spent most of his Iowa career at defensive back.

And yet, as Scott Dochterman reports, Kuchel isn't the typical white player -- you know the stereotypes: "natural leader," "not the greatest athlete but a hell of a kid," "real lunchpail type," "works hard because he has to," "the kind of kid you let your daughter marry," "won't get pulled over every time he drives through Solon." I mean, some of those probably apply to Kuchel, but the athleticism thing isn't really in question (emphasis ours):

Well, Kuchel isn't a slouch in the speed department. He was a three-time Class 1A champion in the 110-meter high hurdles and finished second in the event as a freshman. OK, winning state titles in Iowa's smallest classification doesn't seem like a big deal on the Division I scale. But he set the state's best time three years in a row in the event.

You see? Deep breaths, people. Everything's going to be okay.