Share All sharing options for: Ranking The Iowa-Penn State Wins, No. 3: 2009

Let's face it, under Kirk Ferentz, the Iowa Hawkeyes have always had a particularly interesting relationship with the Penn State Nittany Lions. Which is to say we beat them, a lot, but there's usually plenty to the game itself and its repercussions that makes these games special. There's seven wins in the Kirk Ferentz era, and we're going to rank them all.

Here's the thing, and I know this might be a little bit blasphemous, but hear me out: I kind of think that this game meant and still means more to Penn State fans than Iowa fans. That's largely because of the 2008 game and its ramifications, of course, but consider that Penn State made it its "Whiteout Game"... 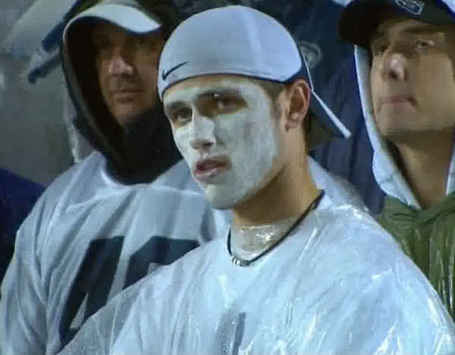 ...which this dude apparently took literally in applying copious amounts of correction fluid to his face...

...and this promo for the game, impeccably narrated by Brent Musberger for ABC/ESPN. You think Iowa even crossed the mind of the producers when they wrote this? Because I don't:

Spoiler alert if you watch past the promo.

This was destined to be Penn State's revenge for 2008, pure and simple. That Iowa was already 3-0 with two wins over BCS competition was sort of beside the point, and that's to be expected when it takes blocked FGs on two consecutive snaps to beat Northern Iowa.

It continued to be "Penn State's game in which Iowa is also participating" when Daryll Clark found Chaz Powell for the long touchdown on the first play from scrimmage, and indeed, that single scorching of Amari Spievey would hold up for more than 45 minutes of gameplay that evening.

And yet, it was obvious by even halftime that Iowa's defense was starting to dominate the game, something that fans had sort of hoped would happen but really had no way of predicting. Iowa was moving the chains on the other side of the ball in small batches in that second half, but Penn State was too, and the result was this odd, pointless (really, nobody was scoring) slapfest that took up gobs of gametime. It was so irritating that when Penn State lined up to punt with a few minutes left in the first half, one intrepid fan tried to fire up the team by reciting Kid Rock's "Bawitdaba":

Unfortunately, the entirety of the fan's knowledge of the lyrics extended only to the very name of the song, and his rote repitition of those first four syllables so distracted the Penn State punt protect team that a 285-pound lineman was able to block the punt and return it for a touchdown for what we assume to be the first time in recorded history.

After that point, the Iowa defense would cripple Penn State's hopes for the rest of the game, forcing three more turnovers in the last quarter to preserve the win. It was really a masterful performance, and a testament to not only Kirk Ferentz as a coach but his players as patient, hard-working winners. They--okay, they did try to do too much once, on that pick that Colin Sandeman kicked back into the air for reasons escaping belief--but that incident aside, they didn't try to do too much at once, and came back slowly, methodically, and irreversibly.

This was a win that changed the entire trajectory of a season; lose here, and pretty much everybody resigns themselves to the fact that with Ricky Stanzi's accuracy issues and Jewel Hampton's knee injury, Iowa is an 8-4 ballclub, and that'll just be that, and maybe James Vanderberg pushes Stanzi for PT if Iowa loses at Arizona in 2010. High standards and all.

But Iowa won, and once again all of a sudden, it was Iowa who was the muscle of the conference, and not Penn State. Considering each team's performance the rest of the way, it'd have been hard to call either team's win in this game an upset, but unlike 2002, nobody in ESPN's booth was talking about a stolen game. Even in the slop and the rain, Iowa engineered one of their most elegant "upsets" of the Kirk Ferentz era, and that this game is only number three in our series rankings only underscores how amazing the last two games were.

Coming up next: I told you no more spoilers!