How American is Ricky Stanzi? Made in America, son: 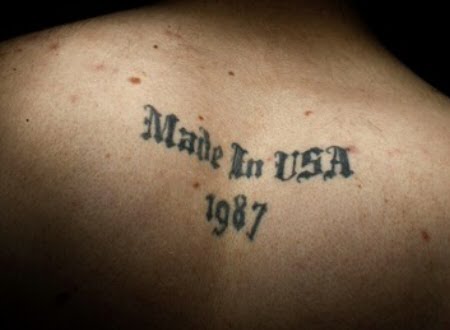 Stanzi’s latest tattoo is positioned across his back; he prides himself on being extremely patriotic (His BlackBerry cover is the American flag).

Emphasis ours. So yes, it's really his tattoo, and that picture's really him; it came from the DI's photo essay on athletes with tattoos (conspicuously absent: Kirk Ferentz's Swayze centaur tattoo, but I guess he's not an athlete), and that was back in May of this year. So yeah. This has been going on for a while.

Not only that, friends, but it's going on right now. As those who've read the Stanzi/Leman poll thread already know, one of our commenters was at a hotel bar that Stanzi stopped by after the Orange Bowl. The shirt he was wearing? Like you even had to ask, lawya: 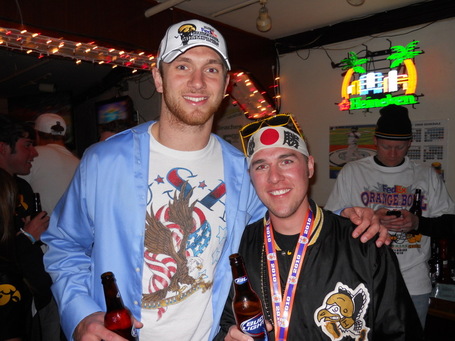 Obviously, you'd expect him to wear that shirt after giving that answer to Chris Myers and all that, but remember: they're all in Miami, and have been for at least a week. Thus, Stanzi had to have packed that shirt and planned to wear it.

So now things start coming into a little clearer focus. Obviously, we weren't in any closed rooms or meetings between media and players, but isn't it just a little odd that after winning the game, Chris Myers asked Ricky Stanzi (of all people) a question that prompted a patriotic answer*?

People: that's politics and PR 101. Of course the question was planted. It'd be crazier if it weren't planted. And it was planted for one very specific reason:

*Technically, Myers' question--if answered properly--does not prompt a patriotic answer. However, he brings up America, and we feel safe in assuming that Myers simply botched his responsibility. After all, it's just Chris Myers.